Bow that can take out enemies in a single shot. Must be used two-handed. Full power from back row.

The Killer Bow (キラーボウ, Kirā Bō?), also known as Archer Bow, CrossBow and Archer, is a recurring weapon in the series. It is often a low to mid-ranked weapon and usually has a chance to inflict instant death whenever the user attacks with it. It is a weapon that is often used by Hunters and Rangers. 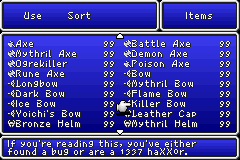 If you're reading this, you've either found a bug or are a 1337 haXXor.

The Killer Bow is a dummied weapon never meant to make it into the game, but it can be acquired with a cheating device. Starting in Dawn of Souls, the developers went so far as to reference the weapon's dummy status in its item description. It should be noted that there is no animation associated with the Killer Bow, so the equipped character will simply attack the enemy with their fist.

The Killer Bow (originally called Archer) is a mid-ranked bow that can be used by Paladin Cecil, Rosa, Palom, and Porom. It can be bought for 3,000 gil at Tomra and Cave of Eblan, and found in the Tower of Babil. It has an Attack of 23 and 1 Accuracy.

In the Easy Type version, it was renamed to Deadly Bow. Its hit rate was increased to 60%.

Killer Bow can be equipped by Cecil, Rydia, Rosa, Palom, Porom, and Cid. It can be found within the Feymarch and Tower of Babil. The bow has an attack power of 23 and a accuracy of 1, also has an increase chance of inflicting a critical hit.

The Killer Bow (originally known as CrossBow) is a high-ranked bow that can be bought in Quelb for 5,000 gil or stolen from Ghidra. It has an Attack of 49 and has a 8% chance of inflicting instant death on enemies. It does not bypass Death immunity, but works even on Heavy enemies and does not heal the undead.

The Killer Bow is the base version of the Ranger's Mythic Weapon, Gastraphetes, found within Nyzul Isle. It can be used to obtain the weapon skill Trueflight.

In the original version, the Killer Bow is a mid-ranked bow that has an Attack of 39. Bows are among the slowest weapons with 2.96s charge, and 1.4s action time. Killer Bow requires 30 LP to use, and can be bought for 2,000 gil in Rabanastre. There is also a chance for it to be a treasure in the Lhusu Mines.

In the Zodiac versions, it now provides 36 Attack, 36 CT, 5% critical rate and requires the Bows 3 license for 35 LP. It can be bought in Rabanastre, Bhujerba, Dalmasca Westersand, Nam-Yensa Sandsea, Tomb of Raithwall, and Balfonheim Port for 2,500 gil, found as a treasure in Ogir-Yensa Sandsea (Platform 1 - Refinery), and from Supinelu in Jahara if the player sold the Jaya Stick. It can also be stolen (55%) from Imdugud in Trial Mode Stage 8. It can be equipped by the Archer class.

A bow with a reinforced steel grip. Crafted for accuracy and guaranteed to hit its mark.

Killer Bow is a low-ranked bow for Selkie that grants 32 Attack and can be bought for 350 gil.

If aimed well, this bow, like any other, can kill enemies with a single shot.

Killer Bow grants +8 to Attack. It can be equipped by Ranger.

A bow that puts a curse on arrows. Improves your chance of putting foes to death.

A bow said to be designed for and preferred by expert archers that is perfect for eliminating targets mid-air. As its name suggests, its high ability to kill instantaneously requires infallible accuracy, and can prove incredibly dangerous in untrained hands. Due to this, many regions have banned the use of the killer bow, though it is safe to say that those with the ability to use it deserve the title of true masters.

Killer Bow is a Bow obtained by defeating Brachiosaur in the Farplane. It provides 60 ATK, is Dark-elemental, gives +50% physical damage against Birds, Bugs, and Plants, +70% accuracy, has a 125-175% damage range, and requires both hands to wield. 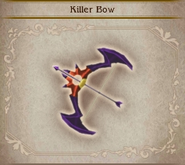 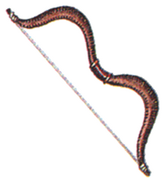 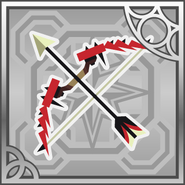 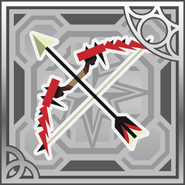 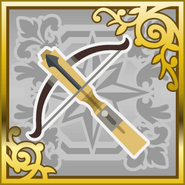 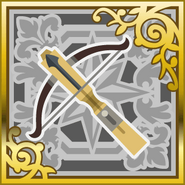 This gallery is incomplete and requires Final Fantasy V (iOS) added. You can help the Final Fantasy Wiki by uploading images.
Ranged weapons
Community content is available under CC-BY-SA unless otherwise noted.
Advertisement