A sword so beautiful, the thought of using it is enough to reduce one to tears.

The Kikuichimonji (菊一文字, Kikuichimonji?), also known as Kikuichimoji, Kiku-ichimonji, Ichimonji, Kiku and Forged, is a recurring weapon in the Final Fantasy series, usually taking the appearance of a katana.

A chrysanthemum adorns its scabbard.

The Kikuichimonji is a sword for the Warrior, Thief, and Red Mage classes and their upgrades. In the GBA remake, it can be dropped from Kraken of the Four Fiends and Rubicante in the Hellfire Chasm. It provides 35 Attack, 25 Accuracy, 30 Critical, and +5 Strength.

The Kiku-Ichimonji is a dark sword used by the Dark Knight and the Ninja. Like all dark swords, it is super-effective against dividing enemies. It is a reward for defeating Shinobi in Falgabard's waterfall, and found in the Cave of Shadows. It provides 115 Attack.

Katana with a chrysanthemum mark engraved on its sheath.

The Kikuichimonji (also known as the Kikuichimoji) is a katana used by Edge. It is the strongest katana that can be bought, with the Murasame and Masamune (as well as the Sasuke's Blade and Mutsonokami in the GBA version) being stronger. It can be found in the Sylph's Home (3D version), and in the Feymarch. It provides 50 Attack and 40 Accuracy. This weapon is metallic.

Kiku-ichimonji has an attack power of 49 and a accuracy of 40. It is the strongest katana for Edge and it can be found in the Tower of Babil.

The Kiku-ichimonji is a weapon for all of the ninjas, and provides 40 Attack and Accuracy, as well as +5 Strength. It is found in Cave of Eblan during the final chapter.

Katana with a chrysanthemum engraved on its sheath. Can be used two-handed.

The Kikuichimonji is a high-level katana that provides 84 Attack and 87 Accuracy, and has a 12% chance for a critical. It may be bought in the Phantom Village or Great Sea Trench for 14,800 gil or stolen from Ninja.

Prettz wields the blade as a nodachi in the OVA series. It is used against a variety of enemies before the final battle, where Prettz uses it to execute RaDevil with a single blow.

The Kiku-ichimonji (also known as Forged) is a low-level katana for Cyan, which can be bought for 1,200 gil in Jidoor, Albrook, and Vector. It has an attack power of 81, and enables the Bushido and Runic commands.

Kiku-ichimonji is also one of the weapons thrown by the Outsider, which deals moderate non-elemental damage to one target.

Though it cannot be equipped nor seen at all, it is only mentioned as one of the choices provided to Zack during the "test" given to him by a woman in the playground in the slums in order to enter a Sephiroth fan club.

The Ichimonji is a katana for Auron that has any three of the following customized onto it, Waterstrike, Firestrike, Icestrike or Lightningstrike.

The Kikuichimonji appears a generic mid-level great katana for Samurai with no exceptional traits.

The Kiku-ichimonji is a katana with an Attack power of 70. All katana have 2.39s charge, and 1.2s action time, making them average what it comes to attacking speed. It can be bought in Archades for 10,500 gil. It can be used after unlocking the Katana 3 license with 45 LP.

In the Zodiac versions, it now provides 71 Attack, 25 Evade, 31 CT, 20% combo rate, and requires the Katana 3 license for 70 LP. It can be bought in Mosphoran Highwaste andPhon Coast for 7,700 gil, found as a treasure in Stilshrine of Miriam (Walk of Reason), Mosphoran Highwaste (Summit Path), and Tchita Uplands (Garden of Life's Circle), dropped by Scythe Mantis (1% chance), or from the Hunt Club sidequest. It can be equipped by the Bushi.

Kikuichimonji is a weapon for Lightning. It is a weapon that's made predominantly for attacking.

Samurai. It can be acquired in the Forbidden Land, Eureka Anemos by upgrading an Antiquated Kiku-ichimonji, and can then upgraded into the Kiku-ichimonji +1.

Kikuichimonji is a secondary arm for Cor.

A katana with a hilt in the shape of a chrysanthemum.

The Kiku-ichimoji has an attack power of 15 with a weapon defense of 15%. It costs 22,000 gil to buy and is only available in Chapter 4. It can also be found with the Treasure Hunter ability in Fort Besselat North Wall. The katana's Iaido ability is called Sanguine Blossom, which deals non-elemental magick damage.

Sword so beautiful it seems a shame to use it.

The Kikuichimonji is a katana used by Assassins and Ninja. It teaches Nightmare and Metal Veil, respectively. It adds +40 to Attack and 5 to Resistance. It can be bought in Cyril and Muscadet for 9,600 gil and in any other town for 10,800 gil.

Kiku-ichimonji is a katana usable by Parivir, Ninja, Assassin, Heritor, and Chocobo Knight. It provides +46 Attack and +5 Resistance, and teaches Gold Veil to Ninjas and Nightmare to Assassins. It can be bought for 4,800 gil in the shop after creating it in the Bazaar after using a Earth Sigil, Einherjarium, and Hedychium Pollen.

The Kiku-ichimonji is a weapon for Jack. It provides 5 Attack Power and is bought from the Akademeia Armory for 1200 gil.

The Kiku-Ichimonji has an attack of 15 and can be found in a chest in the Star Chamber.

Swords made by the master smith Norimune from the last land of Wa are known as Kiku-Ichimonji Norimune. They are said to be slender and refined, but legends mention the existence of a straight sword by Norimune. If it truly is one of his making, it is an epoch-making find.

The Kiku-Ichimonji is a level 53 katana that boasts +37 Attack and increases EX intake rate by +2m. It can be obtained from the shop by trading 15,460 gil, Uchigatana, Wyvern Horn, and Transmogridust.

The Kikuichimonji blades are one of the Onion Knight's unlockable weapons, whilst the Ninja class is in effect. They can only be obtained, alongside the Gold Sword and Omnirod, by purchasing them as DLC from the PlayStation store. Like all other characters' weapons, having it equipped carries no advantages or disadvantages.

This katana and its chrysanthemum motif sheath are highly coveted by all samurai.

Kiku-ichimonji grants +3 to Attack. It can be equipped by Samurai, Ninja, and Auron.

A katana considered to be a famous artisan's masterwork and a work of art. Reduces AP cost.

A katana of such beauty it is a pity to put to use. The chrysanthemums that adorn its scabbard are a symbol of nobility that was often used as a coat of arms. Originally this type of blade as forged exclusively for the royal family, and thus only a handful of blacksmiths were allowed to use this design on their pieces. For a samurai, receiving the kiku-ichimonji from his lord was the ultimate honor.

Kiku-Ichimonji is a Katana obtained by buying it for 1,400 gil at Lost Village of Marlo and Town of Sian, by crafting it using 280 gil, x3 Thickened Hides, x7 Silver Ores, and x3 Lumbers, and as the reward for completing the quest Missing on the Mountain. It provides 30 ATK.

The sharpness of this glorious Far Eastern blade is legendary.

The Kikuichimonji appears with its Final Fantasy V appearance. The card is Fire-elemental.

The Kikuichimonji is a 2-handed sword within the Forsaken Dungeon. It provides 50 Weapon Atk, 8 Durability, +10 Speed, and -4 Consumption Rate. Only Masuda Koji can equip this weapon.

Kikuichimonji is a katana that can be equipped by Ren. 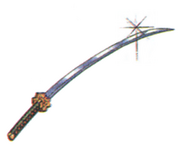 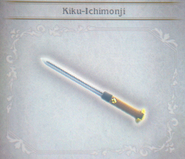 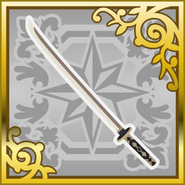 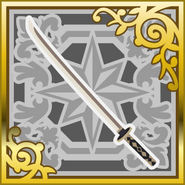 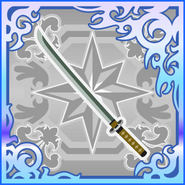 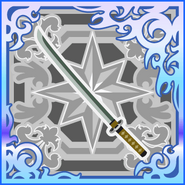 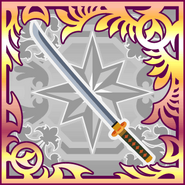 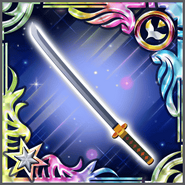 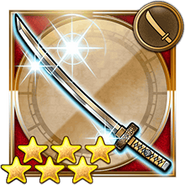 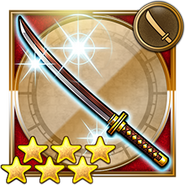 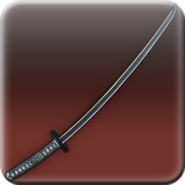 [view · edit · purge]Kiku-ichimonji is the collective name for Japanese swords made by thirteen swordsmiths in the thirteenth century, all of which are inscribed with the Imperial chrysanthemum crest on their tang. "菊" (Kiku) means "chrysanthemum" in Japanese.