Kick (蹴り or けり, Keri?), also known as Punt (キック, Kikku?), is a recurring ability usable by Monks in the series. It allows the user to initiate an attack on all enemies.

An ability of the same name also appears in Final Fantasy Type-0.

Yang can use Kick, which deals damage to all enemies, but it does no damage to Flan type monsters. Kick has a Charge Time of 1. In the 3D release, any elemental or status effect properties on Yang's claws apply to the kick—if he is using the Ice Claw, the kick will be Ice-elemental, for example. In the 3D version, Kick can be obtained as an Augment if he has been given at least one Augment.

Kick is usable by Yang, Monk A and Monk B.

Attack all enemies with a flying kick.

Kick has a Charge Time of 4. Yang, Ursula and the Monks A, B and C can use Kick. Uniquely, Kick is classified as an Attack and not a Special Ability, causing the Moon Phases to affect it differently than other special attacks.

Monks can use the Kick command. It cannot be learned by leveling up the job, so only Monks have access to it. Kick deals damage to all enemies as though an unarmed attack had hit all enemies, and all versions bar the now defunct mobile and Steam versions the damage is augmented by Kaiser Knuckles. Equipped weapons does not add to the power of Kick, except in the Pixel Remaster. As of the mobile versions, Kick deals full damage from and to the back row.

Kick is the ability of Aero Combatant, Elena, and Gargoyle. Elena's and Aero Combatant's version carry the Hit attribute and can only be used once per turn, while Gargoyle's can be used twice per turn and has the Shoot attribute.

Kick is an enemy ability used by Ifrit, which deals non-elemental physical damage to Zack.

Kick Attacks is a passive Trait of the Monk job. It gives any attack made while fighting hand-to-hand a chance to add kick into the attack. Kick damage is equal to the character's base hand-to-hand damage (the damage of a punch without a weapon equipped). The damage and frequency of Kick Attacks can be increased with select equipment and Merit upgrades. The Hand-to-Hand Weapon Skill Dragon Kick also benefits from increased kick damage. In addition, the Monk also has the Footwork ability, which makes kicks their primary form of attack.

Kick is an enemy ability that deals non-elemental damage to a single target. It deals more damage than a normal attack and can be comboed from as well. It can be used by Sleipnir, Mesmenir, Nightmare, Shadonir, Mallicant, Leynir, Gilgamesh (1), Ixion, Firemane, Ba'Gamnan (1, 2), Nazarnir, Victanir, Judge Ghis, Gabranth (1), and Vayne.

Kick is an enemy ability that deals damage to one target. It is used by Cactuar and Giant Cactuar.

Punt is an ability that deals physical damage with a swift kick. It does little damage, but ATB cost is low and can make enemies recoil. It has an ATB cost of 5, Multiplier of 0.15, Stagger Power of E, Stagger Time of C and a Combo of 5.

Kick is an enemy attack with an attack power of 5. It is used by Brownie, Mint Mint, and Red Cap.

Kick is a special attack that has 15 uses, it also increases a Robot's HP by 9. The damage formula for Kick is the user's Str x8. This attack can be used by Bl. Belt, Clayman, Giant, GianToad, HugeToad, Ironman, Kelpie, KingToad, Nitemare, Ogre, Silver, Terorist, Unicorn, and Wh. Belt.

Deals damage to all enemies.

Kick is a Martial Arts ability which costs 1 MP. It attacks all enemies and ignores row. Damage is roughly the same as a regular attack divided by either 2 or the number of enemies on screen, whichever is higher.

Kick is an HP attack for Yang. It consists of a melee BRV attack and an HP attack. It deals 10% HP damage to non-targets. It also greatly raises Yang's BRV damage for 3 turns with Focus.

Kick is an active physical ability that inflicts neutral physical damage on a single target for 3 AP. It has medium topple strength. It can be used by Ponini.

Kick is usable by one of Yang's cards. It deals damage to all the opponent's Forwards equal to half Yang's power, rounded down to the nearest 1000. To use Kick the player must Dull Yang, discard another Yang card, and pay two Earth CP and two Light CP.

Ursula's Kick during the cutscene in Final Fantasy IV: The After Years (iOS). 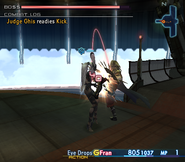 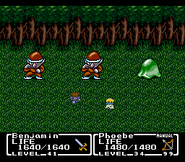 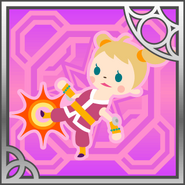 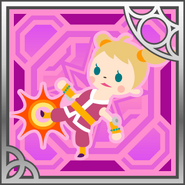 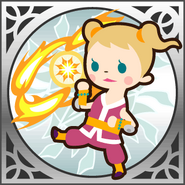 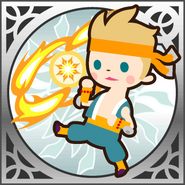 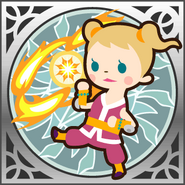 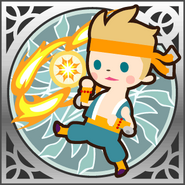 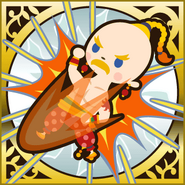 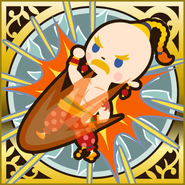 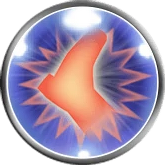