The fastest way to a man's heart is his stomach. The curve of this knife's blade makes it easy.

The Khukuri (ククリ, Kukuri?), also known as Kukri, is a recurring weapon in the Final Fantasy series. It is a low-powered dagger.

Kukri is a dagger that provides 10 damage and 200 delay. It deals 3 damage per second and accumulates 54 TP per hit. It can be equipped by level 20 Warrior, Thief, Dark Knight, Ranger, Ninja, Corsair, Puppetmaster, and Dancer.

The Khukuri has 34 Attack, 2 Speed and 2 Evade. It teaches Molotov Cocktail to Jugglers for 250 AP and Camouflage to Rangers for 300 AP.

The Khukuri is an edged weapon with 20 power and a range of 1, but lowers Agility by 1.

A curved knife used by a small tribe that lives in the tropics. Its main uses were originally limited to hunting and foraging, but an arms trader who discovered its bloody potential brought it to Harena as an instrument of war. 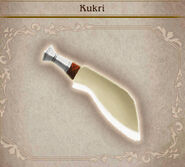 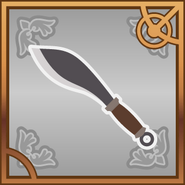 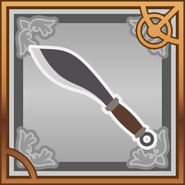 This gallery is incomplete and requires Vagrant Story and Final Fantasy Crystal Chronicles: My Life as a King added. You can help the Final Fantasy Wiki by uploading images.