Khloe meets the Warrior of Light at her stand and is surprised to see them as they are a legend told in many stories. She loves listening and telling stories to cheer up a friend who is sad that her adventurer parents haven't returned from a mission. Recently her stories haven't had the same effect like they used to, so she believes her stories have gotten too similar. She came up with the idea to ask adventurers to share their stories so she can come up with her own, and will trade them with things Rowena gives her. Khloe gives the Warrior of Light a notebook called "Wondrous Tails" as she has a tail and she tells tales.

When the Warrior of Light performs custom deliveries Khloe is surprised to find them working with her sister, and runs off to share stories about dragons with T'kebbe.

Khloe is a young Miqo'te girl with light brown hair and light blue eyes. She wears a white jacket with a yellow scarf, and white pants with a yellow sash covering her waist.

Khloe loves to share stories and tries to cheer her friends up with them, because she likes to see her friends happy. Because her sister is busy with Menphina's Arms Khloe became lonely, though smiles through the rough times.

Khloe can be found in Idyllshire (X:5.7 Y:6.1). Once per week, players may obtain a Wondrous Tails journal containing objectives to fulfill.

Artwork of T'kebbe, Khloe and Zhloe. 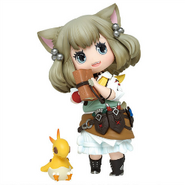 Absent the above context, "Khloe" is an alternative spelling of the Greek-derived Chloe, a female given name that was originally an epithet of the goddess Demeter.

Khloe's surname is a protracted reference to the Final Fantasy XI non-player character Mihli Aliapoh, a Mithra that acts as Waterserpent General and is available as an alter-ego party member through Trust Magic.