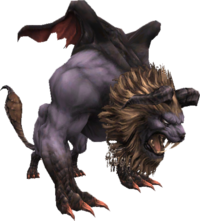 Khimaira is both the name of a Notorious Monster and the family of monsters to which it belongs in Final Fantasy XI.

The Khimaira is an arcana found on Hediva Isle in Caedarva Mire. The origins of this creature is unknown but it is rumored to be a byproduct of a secret Imperial bioweapon engineering program. Being a monster that has parts of different creatures on it, the Khimaira has a wide variety of attacks that it uses when engaged in battle. Its most devastating attack is Fulmination, which is an extremely powerful thunder-based area attack.

The title awarded for defeating Khimaira is Khimaira Carver.

Variants of the Khimaira were once only found in Aht Urhgan territories, but the monster has since appeared in the Walk of Echoes and most recently in Abyssea as well. 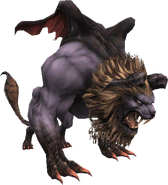 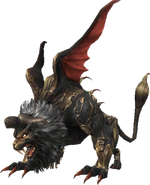