Let us trust in the Crystal's guidance.

Khalia Chival VI is a supporting character in Final Fantasy Type-0. He is the 174th Chancellor of the Dominion of Rubrum and the headmaster of the Akademeia magic academy. He leads the Consortium of Eight, Rubrum's governing body.

Khalia is an older man with gray hair. According to the Rubicus, Khalia is 62 years old and 185cm tall. Kazusa mentions that Khalia, despite his age, still has a muscular physique. He wears a long black coat with gold trimming on the mantle, the shoulder decorations being in the shape of gears' teeth, a recurring motif all around Akademeia. He wears a red robe under his coat, dark trousers and boots and fingerless gloves.

Chancellor Chival serves as both headmaster of Akademeia and chief executive of the Dominion of Rubrum. He enjoyed recognition in his youth as a great mage, and he is similarly respected and admired by his colleagues at present. Chancellor Chival places great importance on order and authority, and he endeavors to embody both as a model for the denizens of the dominion, radiating composure. The chancellor often makes visits to villages around the dominion, preaching the gospel of the Vermilion Bird Crystal.

Khalia was known as a great mage in his youth and has earned the confidence of those around him. Though knows the students are willing to die for the country, he avoids putting them at risk at the point of considering unethical means to defeat their enemy. He is defined by his unshakable faith in the Vermilion Bird Crystal's protection and guidance, even more so than many other members of the Consortium of Eight.

In his youth Khalia rose to fame as a mage, proving himself more powerful than his fellow cadets, and thus the administration appointed him the 174th chancellor and chief executive of Rubrum. He has faith in Archsorceress Arecia Al-Rashia and the group of students she has personally tutored away from the academy, Class Zero.

As Milites invades Rubrum, they deploy crystal jammers to disable the Vermilion Bird Crystal, rendering Rubrum's forces vulnerable. The Militesi Marshal Cid Aulstyne asks for the dominion to surrender lest "her streets run red with blood". Upon hearing this, the chancellor hopes the Crystal will guide their souls to a peaceful resting place.

As Arecia's group of cadets can withstand the crystal jammer's effect, they are deployed to destroy it. As one of her cadets, Ace, requested a COMM be delivered to him for the mission, and asks for Izana Kunagiri from the Rubrum legionaries to do it. Arecia relays Ace's request and the chancellor approves it without consulting the army leaders.

Izana delivers the communicator but perishes. Arecia's cadets destroy the crystal jammers and defeat the White Tiger l'Cie Qun'mi Tru'e. With power returning to the Vermilion Bird Crystal Rubrumite forces drive the Militesi army from the capital. A meeting among the consortium members is called, where the chancellor approves Akademeia's Agito Cadets, Arecia's group of cadets among them, to be deployed in the effort to reclaim the regions Rubrum has lost.

The chancellor believes in the Vermilion Bird Crystal's guidance and thus places high hopes in its Primus l'Cie, Zhuyu Voghfau Byot, who in an unusual move lends his direct support to the dominion. During the battle for the Togoreth Stronghold, Zhuyu crosses blades with the White Tiger Primus l'Cie Nimbus, and the entire area is obliterated.

After Class Zero has been deployed to an imperial magitek factory near Ingram, word arrives that the empire wants to negotiate for peace. Unable to get word to the cadets in time to halt the mission, the chancellor with his entourage—that includes Class Zero's commanding officer Kurasame Susaya as his bodyguard—arrive at the Militesi capital of Ingram.

Queen Andoria invokes the ancient Fabula Pact peace agreement as she arrives, and a ceasefire is called. Class Zero cadets are given leave in Ingram while the chancellor negotiates with Andoria and Marshal Cid Aulstyne of Milites. Andoria is assassinated and, taking this to mean the ceasefire's end, the chancellor and his entourage hurry back to Rubrum to commence the war. Unable to contact Class Zero, the cadets are left behind.

News spread that the cadets of Class Zero had assassinated the queen and attempted to assassinate the marshal as per dominion orders due to Rubrum having been dissatisfied the truce conditions. Andoria is succeeded by a king who allies with the empire to begin a joint campaign against Rubrum. As the situation appears increasingly gloomy the Consortium of Eight is called.

The provost, cadetmaster and commandant blame the Class Zero cadets, whom they deem to have gone rogue. Arecia finds the accusations ludicrous, and the chancellor interrupts the argument by telling the others the Vermilion Bird Secundus l'Cie, Lady Caetuna, is willing to use Verboten Eidolons against the Militesi-Concordian coalition lest they try to invade Rubrum, shocking everyone.

The commandant plots to get rid of Arecia, who he deems has too much power over the consortium. He schemes to send Class Zero and their commanding officer to a suicide mission under the pretense of clearing their name. The commissar, Tazuru Kisga, knows about the commandant's plot, and asks him to leave both herself and the chancellor out of it. Kisga's assignment to the dominion Logistics came through the personal recommendation of the chancellor himself, and her constant deference to him leads many to believe she may be his mistress.

Rubrum secures victory on the western front when Class Zero defeats Shinryu Celestia. The eastern front is falling back and Class Zero is recalled as reinforcements to destroy the empire's crystal jammer allowing for Lady Caetuna to summon Alexander to obliterate the Militesi forces, and she enters crystal stasis.

News are delivered to Khalia who comments that Caetuna's sublimation means they have been following the Will of the Crystal. He asks for Caetuna's crystal retrieved and placed in the catacombs. Khalia meets with Arecia, who comments her children made it out safely. He tells her Caetuna's sublimation means the Crystal's Will has been served, and Arecia agrees. Khalia says he will do his part in ensuring the Crystal's Will, and Arecia says she is counting on him.

The tide of the battle turned to Rubrum's favor, the dominion conquers all of Orience and Tempus Finis begins. As the Rursus attack Akademeia, its consortium members and Central Command go missing, Khalia among them. It is unknown what happens to him or who leads Rubrum and Akademeia after Class Zero saves the world from the Rursan Arbiter. Director Hajime Tabata has commented that Khalia was seen in the first ending created for the game, but since the story states he went into hiding when the Rursus attacked, he now considers Khalia to have died.[1]

Khalia Chival VI was designed by Roberto Ferrari. Earlier story drafts planned making Khalia the leader of the Rursus cognizant of Arecia's plans for Orience, but this story progression was deemed questionable.[2] 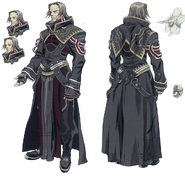 Khalia is voiced by Iemasa Kayumi in the Japanese version of Final Fantasy Type-0.

In the English version, he is voiced by William H. Bassett.

Khalia during the siege of the Vermilion Peristylium.

Artwork of the office.

Artwork of the office.