Kenny Crow is one of the two mascots of the Crow's Nest fast food restaurant chain in Final Fantasy XV, alongside Kelly Crow. His catchphrase implies he is meant to appeal to children. He commonly carries a bottle of Jetty's mineral water with him.

Kenny appears on the logos of the Crow's Nest restaurants and as an often weather-worn mannequin the player can take a photo with. His voice is also heard in adverts on radio. Though his appearance is small in the main game, Kenny makes further comedic cameos in downloadable content, notably in Final Fantasy XV: Comrades, where he is a randomly appearing AI-controlled party member and a boss who dual-wields fish, likely as an allusion to Crow's Nest dishes, "Kenny's Salmon" and "Kenny's 'Special' Salmon".

Kenny is black bird with a yellow beak. He wears a green sleeveless shirt, shorts, and a cap. His cap and shirt have a yellow detail. Kenny appears as a cartoon character when associated with Crow's Nest, but when he appears as a living mascot, it seems he is a human dressed up in a crow suit. 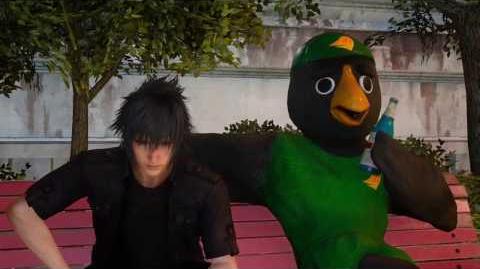 The cartoon Kenny from adverts is happy, enthusiastic, and greets kids with his trademark catchphrase. The mascot version is more sinister, as the person acting as Kenny never removes the outfit, and does not speak apart from the pre-recorded catchphrase (perhaps because the actor would not have the exact same voice as Kenny in the radio adverts would). The mascot is known for intrusive and weird behavior, forcing Noctis to drink from his bottle at the Moogle Chocobo Carnival, and pretending to be a statue, waiting for people to sit next to him unawares, before exclaiming "CAW kids, it's Kenny Crow!" and springing to life.

In the Moogle Chocobo Carnival and Final Fantasy XV: Assassin's Festival the player could do a food-serving minigame at the restaurants, and Kenny could show up as a guest to be served. The player could trigger interactions with Kenny at these free events. In the Moogle Chocobo Carnival, if the player sat on a bench next to Kenny Crow thinking it is a mannequin, Kenny would animate and spook Noctis. The carnival also had a Kenny mascot who forced Noctis to drink a bottle of Jetty's if approached. In Assassin's Festival, if Noctis sat next to a mannequin he expected it to animate, but it was just a regular mannequin. Regardless, Noctis remained wary of it.

I'm a Kenny's Kid! is a missable Archive Highlight found in the First Magitek Production Facility in Final Fantasy XV: Episode Prompto. There is a Kenny Crow statue in the room with the snowmobile, next to some big robots in the hangar bay. In a repeat playthrough of the episode, the player can photograph it when the timer is active and Aranea first appears.

In the Adventurer from Another World collaboration quest the player can first spot a Kenny mascot when viewing through the telescope across Perpetouss Keep. Y'jhimei comments: "Oh, are you admiring that big, black apkallu over there? Isn't he the cutest thing? Ooh I just wanna take him home with me!" to which Noctis advises against. When Y'jhimei sets up a trading post after the quest is over, the Kenny mascot sits next to it.

An NPC using the Kenny Crow model can be used to customize the player's appearance in the newest PC patch.

Kenny Crow is a random AI-controlled companion who is always at least ten levels higher than the player. He dual-wields fish named Argus Salmon as his weapon. When he warp-strikes, he exclaims "CAW kids, it's Kenny Crow!" The player can also customize their avatar to look like Kenny.

Kenny was added as a boss in the March 26th 2019 update.[1] He wields the Sword of the Father and fires laser beams from his eyes. He is immune to all magic. The player has to defeat Ardyn and Ravus to unlock the battle.

In Minecraft, Kenny is one of the character skins included as part of the Final Fantasy XV Skin Pack. In Tekken 7, he makes a cameo in one of Noctis's win poses.

There are drawings of Kenny Crow and the Crow's Nest owner at the diner in Old Lestallum drawn by the Caricaturist.

The hunt posters around the world say: Kenny and Kelly Crow say: "Only YOU can keep our nests safe! Talk to a local tipster and join the hunt today!" This refers to Smokey Bear, an American advertising mascot created to educate the public about the dangers of forest fires. His later slogan "Remember... Only YOU Can Prevent Forest Fires" was created in 1947.

Final Fantasy XV: Comrades has a sign from Kenny Crow in Old Lestallum saying: "CAW, kids! It’s Kenny and Kelly Crow! We've left town until Mr. Sun is ready to rise and shine. But don’t worry: we'll fly back to the Nest real soon. And we'll be serving up more mouthfuls of happiness when we do!"

When Kenny Crow is defeated in Final Fantasy XV: Comrades, a special credits sequence plays where all roles of the game are said to have been played by Kenny Crow himself.

As an April Fools joke in 2017 the official @FFXVJP Twitter announced "Episode Kenny" DLC where the player would assume the role of Kenny Crow whose Armiger would be crystalline fish. 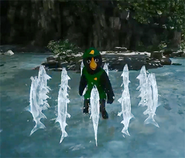 An official Kenny Crow plushie produced by Taito Co. are available from Japanese arcades from February 2018. They are also available online. 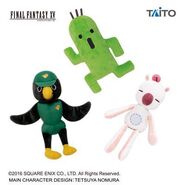 Drawing of Kenny in the original Crow's Nest.

Kenny statue in Adventurer from Another World. 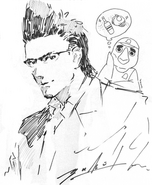 Kenny was originally called Johnny, named after John Crow from Final Fantasy XIV, but in the end the translators went with Kenny to alliterate and to honor Kenneth Pinyopusarerk, the senior localization translator on the team.[2]