Yoshitaka Amano
Kelger Vlondett, also known as Kelga,[2] is a non-player character in Final Fantasy V. Kelger is a werewolf member of the Dawn Warriors, who defeated Exdeath 30 years ago. Kelger is the leader of Quelb, the werewolf home, and as with the other Dawn Warriors, is native to Galuf's world.

Kelger was a Dawn Warrior alongside Galuf Halm Baldesion, Dorgann Klauser, and Xezat Matias Surgate. Thirty years prior to the events of Final Fantasy V, the Dawn Warriors fought Exdeath and chased him to Bartz's world. Unable to defeat Exdeath, the four simply sealed him away in a cave on the world, with Dorgann staying behind on the world to watch over the seal. Kelger questioned Dorgann's decision, but ultimately did not prevent him.[3]

In Final Fantasy V, Kelger first met the Light Warriors when they traveled through Quelb to Drakenvale in search of dragon grass.[note 1] Kelger ambushed the Light Warriors, trusting Galuf but believing the other three worked for Exdeath, and used his "Lupine Attack"; however, the Light Warriors' leader, Bartz Klauser, intercepted it with a powerful blow that sent him through the door. While recovering, Kelger and Galuf learned that Bartz was the son of Dorgann, and helped them travel to Drakenvale.[3]

When the Light Warriors infiltrated Castle Exdeath, an already weak and dying Kelger, the last Dawn Warrior alive, sacrificed his light energy so that Krile Mayer Baldesion could see through the illusion spell cast up by Exdeath.[5] When the Light Warriors fought Exdeath in the Interdimensional Rift and were engulfed by the Void, Kelger's spirit, among those of the other Dawn Warriors and King Alexander Highwind Tycoon, appeared to help them.[6]

Kelger and his fellow Warriors of Dawn sealing Exdeath.

Kelger is an anthropomorphic lupine, appearing closely to a typical depiction of a werewolf. In his official artwork and portrait by Yoshitaka Amano, his fur is in shades of grey, but his in-game sprite depicts him as having fur in a light shade of brown. He wears a gold headpiece with a protruding horn behind his ears. He wears a full-body armor and a yellow cape.

Kelger is deeply mistrusting. In spite of being accompanied by Galuf, Kelger still suspects Bartz, Lenna Charlotte Tycoon, and Faris Scherwiz are working for Exdeath, asking Bartz to mettle with him to prove his worth. Kelger is loyal to his friends however, and when he learns Bartz is the son of his old acquaintance, he accepts the party with open arms.[3] 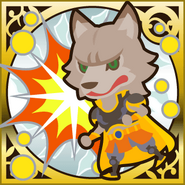 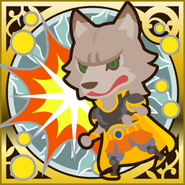 Kelger is a playable character who could be initially recruited during the Challenge Event Warriors of Dawn - Enduring Bonds as a First Time Reward for completing the event's Guardian Tree stage. 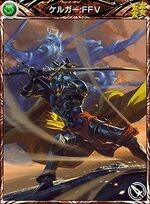 A Lupin resembling Kelger, currently just referred to as "Lupin Youth," appears alongside the game's version of Galuf and two others resembling the Dawn Warriors.

In the GBA/PSP/mobile versions of the original Final Fantasy, Kelga is one of the automatic names the player can choose for the Thief job.

Kelger, along with the other Dawn Warriors, has a trophy/achievement named after him in Final Fantasy XIII, "Kelger's Cup". 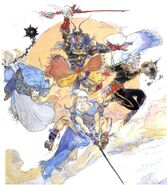 Yoshitaka Amano artwork of Kelger, alongside the other Dawn Warriors.