You really are nothing but trouble.

Keiss is a Selkie character from Final Fantasy Crystal Chronicles: The Crystal Bearers. Unlike most Selkies, Keiss makes an attempt to make an honest living within the Lilty Empire to achieve his dream of "stealing" the title of High Commander from the Lilties. He seems to wield multiple weapons; having been seen using throwing knives, a long sword, and a handgun.

After his job of guarding the Alexis II airship, Keiss takes Jegran's offer for a reward of thirty million gil for the capture of Amidatelion, while asking for an alternate award. He later comes to Layle's aid in the Subterranean Ruins when he and the Yuke battle over the Crystal Idol. After a while of chasing after the Yuke, Keiss goes back with a strange-colored shard for Layle to get an analysis on from Cid.

By the next time they meet, Keiss has become a colonel in the Lilty Army. This, however, causes issues when Keiss juggles his friendship to Layle with his ambition. However, after Vaigali sacrificed himself to save him from Jegran, Keiss helps Belle expose Jegran and alert Princess Althea to avenge the Selkie Guild master.

When Jegran attacks him, Althea sacrifices herself to save him. After the Yuke Crystal's restoration, though offered the position of High Commander, Keiss turns down the chance. Instead, he becomes the new Selkie Guild master, keeping his tribe out of trouble, while uncovering any info on Layle's current status.

Keiss is voiced by Noriaki Sugiyama in the Japanese version.

He is voiced by David Vincent in the English version.

Keiss appears as a playable character. 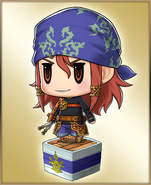 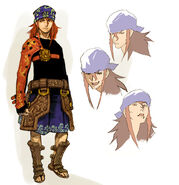 Keiss with a Crystal Shard.

Keiss comments on Layle being a crystal bearer.

Keiss's name could be a reference from an Arabic name (قيس) which means "the strong one".