During the first phase of the fight, Kefka attacks via Blizzard Blitz, Flagrant Fire, Thrumming Thunder, Aero Assault, Ultima Upsurge, Graven Image, Hyper Drive, and Timely Teleport, and taunts the party. After dealing some damage, he summons the Statue of the Gods to aid him, with each part ascending at Kefka's command after the party deals enough damage to him.

Depending on which mode of Sigmascape V4.0 is used, and how many phases the battle lasts, its conclusion will vary: Normal mode lasts three phases, with Kefka whining he lost in disbelief when fading away. In Savage mode, Kefka disappears while gloating about how he has found a glorious purpose, with the Statue of the Gods collapsing and the skyscape turning gold as Kefka descends. He then states a variant of his speech before confronting the Returners in this form, "Life... dreams... hope... Where do they come from, and where do they go? Such things as those... are mine to destroy!" When preparing Forsaken, Nero tol Scaeva yells "He's gone beyond chaos... the end approaches!", a variation of Kefka's "The end comes... beyond chaos..." in the SNES/PS versions when charging the aforementioned attack. Late in the battle he comments on how only utter ruin will suffice. Upon being defeated he screeches as he fades away.

The Wind-Up Kefka's description implies this was the original Kefka from Final Fantasy VI, whose world was in an alternate dimension, with only Y'shtola Rhul recognizing him.

The manner in which Kefka is fought regarding the Statue of the Gods resembles a dummied concept for the final boss fight against Kefka from his originating game.

Kefka appears as a recruitable character. 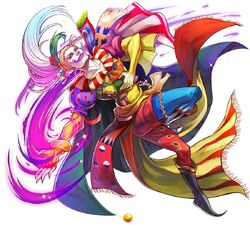 Kefka appears as a boss and summon. He utilizes Havoc Wing. 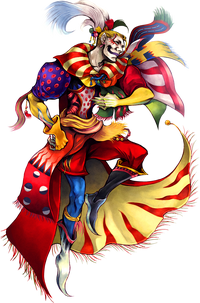 Working with Kuja, Exdeath, and the Cloud of Darkness, the group's goal is to destroy all existence. Kefka attempts to use Terra to further their plans by taking control of her, then appearing to taunt her with the brutality of her abilities and her past servitude to Chaos. He assists Kuja to capture Zidane, though accidentally catches Bartz instead. Kefka suggests to have Exdeath trick Bartz into giving the trap to Zidane.

His alternate form is a palette swap based on his Final Fantasy VI battle sprite.

Kefka reappears as a Warrior of Chaos alongside the other characters from the original. In this cycle he acts to sabotage the plans of his allies to betray Chaos, revealing Kuja's treachery to the other Warriors of Chaos and arranging for him to be defeated by Lightning, and manipulating Sephiroth to attack Tifa, prompting Cloud to reveal his true colors when he tries to protect her. He uses Terra as a weapon of war until Kuja weakens his spell, allowing Terra to resist him and flee Kefka's grasp with Vaan. Kefka serves as one of the participants in the final battle of Scenario 012, fighting Vaan.

Kefka's second alternate outfit gives him green robes with red and gold details, based on an alternate Yoshitaka Amano artwork and bearing a resemblance to his original Final Fantasy VI sprite. 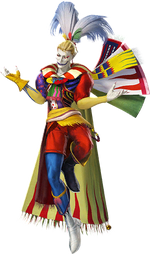 Kefka is a playable character as a representative of Final Fantasy VI. He is available via update on 30th June, 2016. He is the second playable antagonist to be added. His overall attire and appearance has been given an overhaul, but otherwise retains his classic look.

He is Marksman-type, whose spells (which can be charged) keep opponents on their toes with their odd trajectories and uneven speeds. His EX Skill "Heartless Angel" afflict debuffs on all nearby foes, the number of debuffs increasing the longer the skill is charged. If the summon gauge is not full, the player can have Kefka perform a taunt, which increases one's Bravery by a random amount.

Kefka appears as an enemy and playable character. He can be recruited in the character event To Wane a Broken Heart. He is an Attacker, and equips Other-type weapons. Uses Black Magic to attack his enemies: his first BRV Attack, "Trine", adds BRV to himself followed by an HP Attack, and inflicts debuffs on the target. His second move "Light of Judgement" is a magic BRV Attack plus HP Attack, and inflicts a triple debuff to its target.

A court mage for the empire, Kefka's unhinged spirit drives him in his pursuit of pleasure. With the power of the espers and the Warring Triad in his hands, the entire world will be shifted by this psycho clown.

Kefka appears in his normal form as a boss-type enemy.

Consuming the Warring Triad's power, Kefka transforms into a terrible god. At the top of his sky-splitting tower of rubble, he looks down upon the earth he has ruined and laughs as he rains down destruction at will.

Both of Kefka's forms appear as enemies, and Kefka himself makes his playable debut as the representative antagonist of Final Fantasy VI, obtained by collecting Dark Crystal Shards. His Limit, Forsaken Null, deals damage to boss-type enemies in direct proportion to his Magic. He has access to many Black Magic spells in addition to Dualcast.

Kefka in his final form appears as a boss. He also has a playable sprite which is modeled after his mobile sprite.

Playable sprite.
Add a photo to this gallery

Kefka appears as a Legend character to summon. In addition, he also appeared as the boss on the Narshe (Snow Plains) map during the "Deathgaze's Onslaught" event.

Light of Judgment (UR).
Add a photo to this gallery

Light of Judgment (UR).
Add a photo to this gallery

Both Kefka and his final form, called Lord Kefka, appear as bosses. He attacks with Firaga in his human form. In his angelic form, he uses Havoc Wing that hits three targets, horizontally while Forsaken hits over eight different characters.

Kefka is a boss in several Final Fantasy VI Core and Event dungeons. He is also a playable character who could be recruited during the Challenge Event Forgotten Bond as the First Time Reward for completing the event's Kefka's Tower stage on the Classic difficulty.

Kefka appears as a summonable vision and optional playable character. A 3-6★ Rare Summon, his job is listed as Archmage, and his role is Magic Damage. He originally could awaken only up to 5★, but received a new form for the Final Fantasy VI event The Floating Continent. His Trust Master reward is the Ribbon accessory. 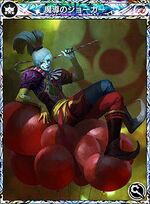 Trading card of Kefka in his Final Fantasy VI artwork.

Trading card of Kefka in his Dissidia artwork.

Trading card of Kefka in his Dissidia EX Mode render.

Trading card of Kefka in his Dissidia render.

Trading card of Kefka in his Theatrhythm Final Fantasy appearance.
Add a photo to this gallery

Kefka appears as a character in the series (more recently known as Fortune Street) of video-game board games exclusive to Japan. In Dragon Quest & Final Fantasy in Itadaki Street Portable, he appears as a chance card. The card's ability: Purchase stock value with extra 10% cost. His appearance as a playable character will be in Itadaki Street: Dragon Quest & Final Fantasy 30th Anniversary.

Kefka appears as a card belonging to the God Tribe in Lord of Vermilion II. It features his original Yoshitaka Amano artwork. His in-game appearance is identical to his normal appearance in Dissidia Final Fantasy.

Kefka appeared as part of the Final Fantasy collaboration, both in his standard appearance and in his final boss form. His artwork alluded to an alternate Amano artwork as well as his battle sprite. The collaboration event occurred in the North American version of the game from 2 to 15 November, 2015.

Kefka in his god form.
Add a photo to this gallery 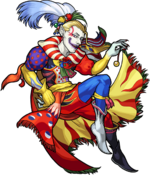 Kefka appears as part of the 2018 Final Fantasy collaboration.

Kefka appears in the Dissida Final Fantasy collaboration event as a Rank SS Yo-kai of the Eerie Tribe.

Kefka, or more accurately, his god form, appears as a Heartless under the name as "Mysterious Sir". This technically makes him the second Final Fantasy villain to appear in the Kingdom Hearts series (the first being Sephiroth.).