). The second alternate coloration colors his attire primarily green and red like his 16-bit field sprite (

His second alternate costume is "Fallen One", his God of Magic form seen in the final battle of Final Fantasy VI and an updated version of his EX Mode form seen in previous Dissidia games. This has two alternate colorations, the first being an updated version of his Snobbish Turban costume's EX Mode appearance in Dissidia 012, itself based on the boss Rest from the final battle gauntlet in Final Fantasy VI, while the second had an inverted color palette of his default (orange-red for his skin, and purple for his loincloth), giving him a passing resemblance to an esper that Kefka fought at Thamasa. 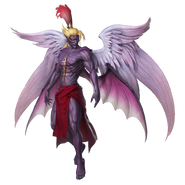 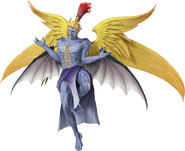 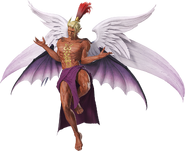 Fallen One III.
Add a photo to this gallery

Kefka retains his maniacal, twisted, psychopathic, and short-tempered character traits. He has no qualms with destroying a location that is not part of the world he originates from out of sheer boredom. He is the only one of the warriors of Spiritus to deliberately try to get the warriors of Materia killed by the planesgorgers. His defeat pose alludes to his childish nature by having him throw a temper tantrum.

Kefka remains snarky, abrasive, and confident of his victory even when he appears outmatched. His lines are often slandering, exempting mirror matches, where he is entranced by his own image.

Kefka's "equips" headpieces as his weapon. Kefka's alternate weapons have not appeared in prior Final Fantasy games, and are original to the Dissidia series. They refer to his status as Emperor Gestahl's court jester in Final Fantasy VI. 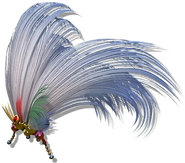 Kefka's Decoration to Die For. 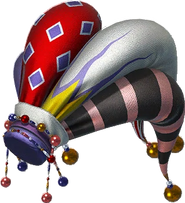 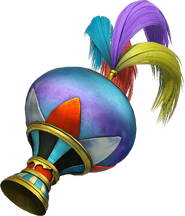 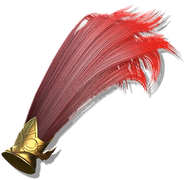 Kefka's Courtly Headdress.
Add a photo to this gallery

Kefka is summoned as a warrior of Spiritus alongside his fellow villains in the new war. Shantotto stumbles upon Kefka, Cloud of Darkness, and Sephiroth heading to meet Spiritus, with Kefka gleefully skipping about, happy to be back on World B and anticipating the upcoming battles.

Kefka wanders into a schism between Exdeath and Shantotto, Tidus, and Firion in Narshe, and is attacked by Firion. He dodges and grabs Tidus and Exdeath, dragging them into a portal where Ultimecia awaits. Firion and Shantotto save Tidus, and Kefka looks on amused while Ultimecia and Shantotto sling insults at each other. When the trio of heroes fails to escape Kefka tries to get away, but is stopped by Firion, who is nearly blasted into a portal by one of Kefka’s spells. He is saved by Jecht, who joins Tidus and Firion against Exdeath, Ultimecia, and Kefka in Besaid after Shantotto fell into a portal. When the planesgorgers begin to destroy the area, Kefka and the others retreat.

In Rabanastre, Kefka blasts the city with spells out of boredom until he notices the presence of a planesgorger. He taunts Vaan and engages in battle against him, Onion Knight, and Y'shtola, but this is a trick to summon the planesgorgers, who destroy Rabanastre as Kefka retreats.

When the heroes and antagonists meet to stage a battle to lure Shinryu out, the dragon god responsible for the planesgorgers, Terra tells Kefka that though they are joining forces now, he will not be forgiven. Kefka laughs and leers snidely in response. During the battle, he attacks Vaan and Tidus with lightning spells before the two get the upper hand and hit him with a Pyroclasm kicked by Tidus.

As Shinryu arrives Kefka participates in the joint attack to defeat it, but is repelled. After regaining their composure, the warriors work together to defeat the dragon. The moogles give Kefka a crystal to host his memories for Spiritus to use in the new cycles of wars. With a crystal doppelgänger of himself to serve on Spiritus's behalf, Kefka returns to his homeworld.

Type: Marksman - Kefka's spells keep opponents on their toes with their odd trajectories and uneven speeds. Most of his skills can be charged for added craziness.
EX Skill: Heartless Angel - Afflicts debuffs on all nearby foes. The number of debuffs increases the longer the skill is charged.

If the summon gauge is not full, the player can use the

to have Kefka perform a taunt, which also boosts Bravery by a random amount.

Charging up an attack. 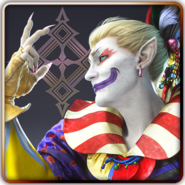