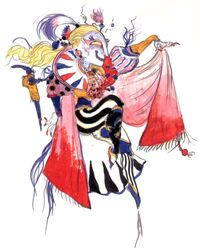 "Kefka" (魔導士ケフカ, Madōshi Kefuka?, lit. Magic-user Kefka) is the theme of Kefka Palazzo in Final Fantasy VI. It was composed by Nobuo Uematsu.

The theme begins with a light, bouncing beat using wind and string instruments, but eventually the background drumbeats and cymbals become more prominent and the theme becomes louder and more dramatic, perhaps a reflection of Kefka's rise to power or his further descent into insanity.

"Kefka" plays frequently during the first part of the game, accompanying Kefka's appearances, and during the party's confrontation with him before the final battle. Its motif is also partially included in the third and fourth parts of Dancing Mad.

"Kefka" is the ninth track of the game's soundtrack's first disc.

A solo piano arrangement of the theme is included on this album.

An orchestrated version of the theme is included on this album, performed by the Milan Symphony Orchestra. It is the second track of the album.