Life... dreams... hope... Where do they come from? And where do they go? Such meaningless things...I'll destroy them all!

Kefka is the final boss of Final Fantasy VI, fought for the fifth and final time at the end of the game. Having become the God of Magic itself, Kefka faces the party after declaring his desire to destroy the bonds of life and end all existence. The party appears to fight Kefka in a setting that represents the Heavens. The final phase of the song, "Dancing Mad", plays during the battle.

Defeating Kefka in the mobile/Steam version earns the Balance is Restored achievement.

The battle is fought in several stages. Kefka always uses Heartless Angel on his first turn, reducing the party's HP to 1. He will most often use Firaga, Blizzaga and Thundaga, but will also use his special, a powerful physical attack called Havoc Wing, that has high power and can easily KO a character. Kefka will also use Trine, inflicting Blind and Silence on the party.

The second stage begins once Kefka's HP has been reduced to 32,640. Kefka will now begin using his ultimate attack, Forsaken. The attack begins with Kefka stating "The end draws near..." ("The end comes...beyond chaos." in the SNES/PlayStation versions), followed by a head representing Kefka's laughing expression appearing in front of him. His turn ends, and the background begins to shake. On his next turn, Kefka unleashes the attack, doing high non-elemental, unblockable magic damage to the entire party. Despite the preparation time, base power and animation, Forsaken doesn't inflict much damage as it doesn't ignore split damage or magic defense. By comparison, Ultima, which does ignore magic defense and has only two thirds of the spell power of Forsaken, does significantly more damage.

After Forsaken's first use, Kefka will begin using two turns for Havoc Wing, Trine or Vengeance, which eliminates any positive status changes from the party. When Kefka's HP hits 30,080, he will begin countering attacks with Hyperdrive (unless he is charging Forsaken), a powerful magic attack that ignores defense and will likely kill its target. When Kefka's HP drops to 10,240, his counterattack changes to Ultima.

The final stage begins when Kefka has 7,680 HP left; he will begin alternating between Forsaken and Meteor. He will continue to counter when he is not charging up Forsaken.

Since Kefka is the final boss, the player should use their strongest spells and attacks. Having a character with high magic power on standby to cast Curaga on the party is not a bad idea in case the player is caught off-guard, and buffing spells like Haste and Shell are useful. As long as the player keeps their HP high and does not trigger Kefka's Ultima counterattack, he should fall in time.

It is advised to heal with Curaga immediately after Kefka uses Heartless Angel at the beginning of battle. The player should use Remedies to heal the negative statuses he inflicts.

When Kefka is countering with Ultima, it is advised to only attack when Kefka is preparing Forsaken, as he will not counter when charging it.

A cheap way to defeat Kefka is to have a character equipped with two Ultima Weapons (possible if a second is stolen from Rest) and a Master's Scroll. As the Ultima Weapons ignore defense, at a high enough level the character can kill Kefka in one attack—they will attack him eight times, each blow only needs to do a minimum of 8,000 damage to defeat Kefka in one turn. This will also work with Locke's Valiant Knife if he has high max HP and is on low health. Setzer's Fixed Dice also work with this strategy: with Setzer at only level 50, a roll of triple fives or triple sixes will do 9,999 damage, and triple fours will still do high damage. Thus, with enough lucky rolls, Setzer can kill Kefka in two or three attacks regardless of level or attack strength. Using the Quick spell helps. Quick combined with Ultima, Soul of Thamasa and a Celestriad can kill all of Kefka's forms before he can even attack; only when destroying parts their final attacks will happen. 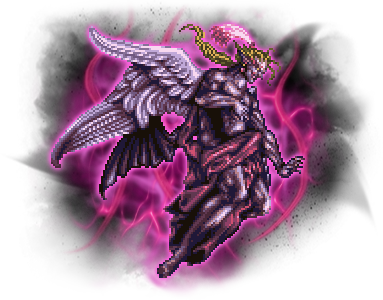 Retrieved from "https://finalfantasy.fandom.com/wiki/Kefka_(final_boss)?oldid=3239240"
Community content is available under CC-BY-SA unless otherwise noted.