Kazus is a town in Final Fantasy III. Located on the Floating Continent, it is a small town southeast of Castle Sasune, near a desert. It is the hometown of Refia and her adopted father, Takka, the blacksmith. An entrance to the Mythril Mines is found in the northeastern corner of the town. If the party tries to leave before meeting Cid in the NES version, they will face Werewolves that will easily kill them. A HP/MP spring can be found.

The Warriors of the Light arrive in Kazus and find it has been struck by a curse cast by the Djinn and everyone has been turned into a ghost. They meet Cid at the pub who lends them his airship so that they can defeat Djinn and lift the curse.

In the remake version, Luneth, when arriving in Kazus, finds Arc, who notices that everyone is under the Djinn's curse. The party encounters Cid in the pub and also meet Takka, who is worried, along with his daughter Refia. He tells the party the King has a Mythril Ring and the Warriors of the Light head to Sasune. Later, after the Wind Crystal makes her a Warrior of the Light, Refia returns to her father's house, but runs away again to follow her friends.

Note: The player cannot buy anything from the shops until Djinn's curse is lifted.

Enemies are only encountered outside the village.

The background music that plays in Kazus before the Djinn is defeated is called "The Djinn's Curse", and is replaced by "Return of the Warriors" after the demon is killed. 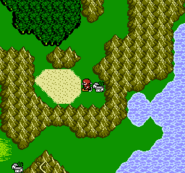 Kazus on the World Map in Final Fantasy III (NES). 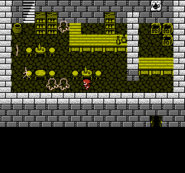 The townspeople under the curse of Djinn (NES).

The town of Kazus on the World Map (DS).

The townspeople under the curse of Djinn (DS).

The townspeople under the curse of Djinn (PC).