Katana also know as "Kamaitachi". Can be used two-handed.

Kazekiri (かぜきりのやいば, Kazekiri no Yaiba?, lit. Wind Cutter Blade), also known as Tempest, Wind Slash or Air Blade, is a recurring weapon in the Final Fantasy series. Usually a mid-ranked katana, it is a Wind-elemental weapon. It sometimes shares its name with the recurring special attack Wind Slash and may be connected to it or a similar Wind-elemental ability.

The Wind Slash (also known as Wind Sword or Air Blade), is the second-weakest katana, found at Drakenvale. It has 41 Attack Power, a hit rate of 44, is Wind-elemental, and has a 12% chance to cast the ability Wind Slash when the user attacks. It has a 12% chance to land a critical and increases the damage of all Wind elemental attacks by 50%.

May invoke a razor gale upon striking an enemy.

The Kazekiri (originally translated as the Tempest) is a katana for Cyan. It can be found in the Cave to the Sealed Gate or stolen from Number 128. It has an attack power of 101, may randomly cast Wind Slash when attacking, and enables the Bushido and Runic commands.

The Kazekiri is one of several equipment pieces used in the famous "Wind God Gau" combination in the SNES release, where Gau uses the Kazekiri in tandem with the Offering and the Stray Cat Rage to attack four times a turn at increased power, with the possibility of using Wind Slash to attack all enemies at once per attack.

Some enemies can also throw the Kazekiri as an attack.

The Wind Slash is a weapon for Yuffie. It can be found aboard the Cargo Ship and later purchased in Junon. It has 30 Attack Power, a 107 hit rate, increases Magic by 7, and has three single Materia slots that offer Double Growth. Instead of a katana, the weapon is a large fan.

The Windslicer is the Vigil weapon corresponding to the Samurai's Mythic Weapon (Kogarasumaru), found within Nyzul Isle. It can be used to obtain the Weapon skill Tachi: Rana.

The Kazekiri is a level 88 katana that gives +59 Attack and increases EX Force Absorption Range by 4m.

The Kazekiri is a level 90 katana with that increases Attack by 63, lowers Defense by 1, and increases Bravery by 34. It also boosts EX Force Absorption Range by 2m.

A katana praised for its ability to slice anything, including the air itself. It is said to be able to cut the whirlwinds created by giant birds in half. There was once an incident where a great many people were hacked down by this blade in the dark of night. The resulting mound of dismembered bodies was said to resemble the aftermath of a ferocious metal-clawed beast.

Kazekiri is a Katana obtained by buying it for 1,400 gil at Felicitas Town, Village of Ambel, Town of Amore, Downtown Zoldaad, Underworld Gaberada, and Town of Sian, by crafting it using 280 gil, x5 Wind Crysts, x3 Thickened Hides, x7 Lumbers, and x3 Lumbers, and as the rewards for finding and turning in the Earth Key from Zadehl Westersand and from the event A Frosty Offensive. It provides 35 ATK and is Wind-elemental. 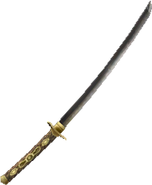 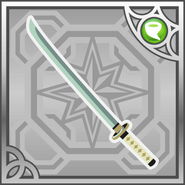 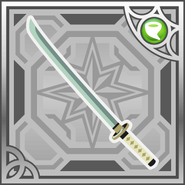 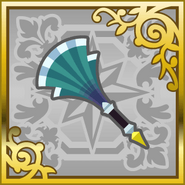 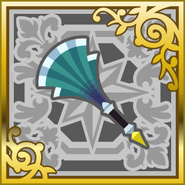 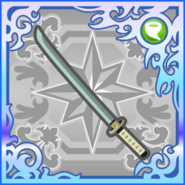 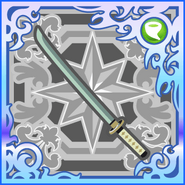