Tetsuya Nomura
Katana (Male) is a playable male Turk from Before Crisis -Final Fantasy VII-. As his name implies, his chosen weapon is the katana Murasame, which can be further augmented by Materia.

While a long time member of the Turks, Katana (male) originally operated in the Turks' secondary division and first appears in Episode 18 when Tseng is ordered to bolster the Turks' ranks.

Wearing glasses and possessing a scar down one cheek, Katana (Male) wears the standard Turk uniform of black suit with black tie, white dress shirt and brown boots. He has blue eyes and short black hair.

Katana (Male)'s formidable reputation is contrasted by his love for beauty. He tends not to stay in one place for long but is a long-time serving member of the Turks. As such he is one of the most senior of the playable characters.

Katana (Male) had something of a reputation in his hometown, Gongaga, as a powerful and skillful swordsman. When a friend of his was kidnapped, Katana (Male) went to rescue him alone. The story has it that Katana (Male) arrived at the place his friend was being held and single-handedly defeated all the operatives in the area.

While his friend was presumably freed, Katana (Male) himself was put into prison. His only way out came from the Turks, who recruited him, telling him that he would be free to leave if he would offer his formidable talent to their service. He did, and has been with the Turks for many years.

After Corel Reactor's destruction Verdot deserted the Turks to pursue his recently rediscovered daughter, Elfe, and Tseng is instructed to link with the Turks' secondary division to bolster numbers. Three years and three months after the Corel Reactor's destruction the Player Turk and Reno are tasked with the capture of an endangered species known as "guardians of the planet" in Cosmo Canyon for Professor Hojo.

While searching the canyon the pair visit Bugenhagen and discover more about the monster Avalanche leader Fuhito hopes to summon through Elfe's Materia and learns the materia is sapping Elfe's life force to exist; as a result Verdot, having not been sighted since Corel, is searching for a way to remove it without harming his daughter.

Resuming their pursuit of the "Guardian", the Turks come across new Raven operatives, far stronger than previously encountered, also pursuing the animals to disrupt a sacred ceremony held in the canyon. While the two groups initially pursued Deneh, Nanaki interferes and attacks the Turks to give Deneh time to flee. While capturing him, the Player Turk allows Nanaki to perform the ritual before taking him away.

While any of the Player Turks can be chosen for Episode 19 and pursue Zack and Cloud as they escape the Nibelheim Mansion. The Turk whose encounter with them is considered canon is Shuriken (Female) (aka "Cissnei") due to events in Crisis Core -Final Fantasy VII-.

Pursuing two research samples that had escaped the Nibelheim Mansion, the Player Turk competes with the Shinra army to locate them while questioning why they are hunting the subjects whom they were partially responsible for imprisoning in the mansion four years previously.

Finally coming across the escapees on the beach, the Player Turk discovers they were hunting Zack, a former 1st class SOLDIER member the Turks had worked with previously. Conflicted over their feelings, the Player Turk attempts to do their duty and capture him, but after seeing the extent of damage the experiments have done to Cloud, an infantryman whom Zack saved from the Shinra Mansion, they report Zack is no longer in the area and lets Zack escape. The Player Turk returns to Nibelheim to investigate the mansion where they discover Verdot pouring through the mansion's archives.

Learning he needs a certain Materia to remove the Materia from Elfe's body and stop it draining her life, Verdot has been searching for these support Materia, learning the Turks already possess one given to them by Shears during the Corel Reactor incident. The pair search through the mansion and come across clues to another of Hojo's "research subjects", Vincent Valentine, Verdot's old Turk partner, who informs them of the location of such a Materia elsewhere in the Mansion. As Avalanche appears to also find the support Materia, the Player Turk and Verdot lose the orb to Fuhito while Scarlet informs President Shinra in Midgar that the Turks are assisting Verdot in spite of their orders to "shoot on sight".

Hidden within their headquarters within the Shinra Building as Scarlet embarks on a hunt for them, the Turks meet with Reeve to locate the next Materia. Learning it is in the remains of the Gongaga mako reactor they, along with Cait Sith, steal a submarine from Junon to travel and evade the Shinra military. Entering the reactor they find Avalanche troops combing the facility for the support Materia. Thanks to the timely arrival of Verdot and Shears, who was rescued by Verdot in Corel and had been working with him since, the next support Materia is obtained.

When the fugitives Zack and Cloud are relocated, the Turks attempt a Priority-S retrieval attempt, but are unable to acquire them before the Shinra military ambushes them. Learning the Avalanche is attempting to break into Corel Prison, the Turks presume a Materia piece is there and embark across the desert to obtain it. Discovering Shalua Rui in the desert, the Player Turk brings her to shelter in the caverns under the desert.

The Player Turk finds the final support Materia within the caverns while being pursued by Avalanche Ravens. Escaping with Shalua, they brave a sandstorm before being cornered. Shalua announces her hatred of the Turks, but the Ravens still attack. Once again Shears and Verdot arrive to support them and Shears takes Shalua to a safe location. Scarlet catches up to and surrounds the Player Turk and Verdot. Attacking them into submission, Scarlet captures Verdot and takes him back to Midgar to be executed.

While Tseng, Rude and Reno attempt to discern the location of where Verdot is being held, the other Turks and Shears meet in Wall Market and split the Materia orbs among themselves before dispatching to look for Elfe. Meanwhile Elena, Gun (Female)'s sister, witnesses a trio of insurgent Ravens and attempts to follow them before getting bored and going home.

Assisted by Rufus Shinra, Tseng locates Verdot and attempts to liberate him while ordering the Player Turk, who is being pursued by Shinra troops through Wall Market, to secure an escape out of Midgar. While abducting a truck to get through checkpoints set up by the military, the Player Turk discovers that not only was the truck being driven by a Raven dressed as a Shinra troop, but that Elena has been kidnapped and is in the truck with them.

After leaving the truck and having it leave with Elena still on board, the Player Turk follows it to a train where, onboard, they exchange the support Materia with the Ravens for Elena. Elsewhere in the Sector 5 Slums, Shears is confronted by Fuhito. He opts to go with Fuhito, giving him possession of the support Materia to find Elfe, but he is instead beaten down and the support Materia stolen from him.

As the Player Turks all chase after Fuhito along the construct created by Zirconiade's summoning, Tseng, Reno, Rude, Verdot and an awakened Elfe are captured by the Shinra military. Splitting into teams of two when the pathways branch into a maze, the Turks come across Behemoths. As the others battle the Behemoths, the Player Turk catches up to Fuhito and is saved from his attack by Shears. Teaming up against the Avalanche commander, the Player Turk and Shears defeat Fuhito, but in an attempt to continue Zirconiade's awakening he places the Materia inside himself and transforms; mortally wounding Shears in his new form.

As the Player Turk bests Fuhito even in his transformed state, Fuhito attempts to take them with him in his defeat, but a dying Shears holds him back and the pair erupt in a blast of light. Meanwhile, confronted with the offer that the Turks would be spared from execution if Verdot and Elfe are killed, Tseng turns his gun on the pair and fires.

As Tseng leaves with the bodies of Verdot and Elfe, Reno and Rude wait for their remaining comrades still fighting Zirconiade. Reaching the end of the airborne construct, the Player Turk attacks Zirconiade only to be unable to affect it by themselves. With the arrival of other Turks they damage the monster, but the other Turks are taken down by the summon and the Player Turk is also worn down.

With the memories of the people they met as a Turk the Player Turk gathers their strength of will and destroys Zirconiade. The shockwave emitted from its destruction destroys the construct on which the attacking Turks are standing. Reno and Rude watch in horror as the construction vanishes in an explosion of light.

Following Zirconiade's defeat, the Player Turks go into hiding across the planet; retiring to Midgar, Junon, Costa del Sol, Cosmo Canyon, Icicle Inn, and Wutai. Unbeknown to them, as Zirconiade had been summoned the planet had awakened one of its Weapons to deal with the threat. Because the Turks were successful in defeating Zirconiade before the Weapon's arrival, the Weapon no longer had a purpose.

Instead of returning to sleep, Jade Weapon started to consider the Turks a threat due to their defeat of Zirconiade and how, technically, they had destroyed what a part of the planet's ecology. A number of weeks afterwards, Verdot calls the Player Turks to inform them the Weapon is now hunting them.

Given an advanced radar system on their PHS to track and hunt the Jade Weapon in turn and learning the dark mist the Weapon generates and surrounds itself with could only be penetrated by the light given from various Materia Pillars across the planet, the Turks locate these pillars to enable themselves to do battle against the Weapon.

Coming to a location covered in mist, the Weapon is supported by various oval-like constructs which the Turks battle while the Weapon attempts to bombard them from above. After numerous hunts and battles across the planet, the Turks destroy the Weapon and return to their respective lives in exile.

Each Turk has a weapon particular to him or her. Weapon upgrades can be purchased using RP (Rank Points) gained from completing missions. Katana's weapon, the Murasame, is one of the swords wielded by Cloud Strife in Final Fantasy VII. It is possible to have the weapon attacks take on elemental attributes by slotting the appropriate Materia into the weapon.

While not specified by name, many of the Turks who had gone into hiding following the battle against Zirconiade reappear during the events of Final Fantasy VII as specified in the chapter Case of Shinra. Following Tseng being attacked by Sephiroth in the Temple of the Ancients, Cait Sith appears to stable his condition before contacting three of the Turks to bring him to Junon for treatment.

Later on, while observing the ruins of the Shinra Building following the attack by the Diamond Weapon, Reno and Rude recollect the times themselves and the other Turks had spent in the now ruined headquarters.

During Meteorfall, the Turks and Verdot return to assist in the evacuation of Midgar and, following the Meteor's destruction, the Turks leave, returning to the lives they had obtained in their exile, but also work to gather intelligence on the current state of the planet from their respective locations; sending the information to Verdot who would offer it to Tseng when required.

Katana in Before Crisis. 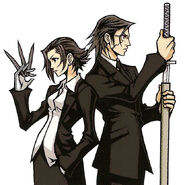 Katana and Shuriken (Female) overlooking the Player Turk in hospital. 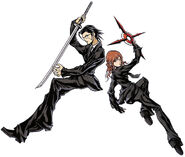