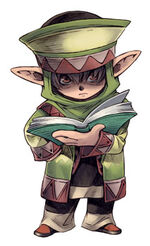 There can be no greater honor for this humble scholar. Others have laid down their lives before me, but none for a cause so true...

Karaha-Baruha is a non-playable Tarutaru summoner in Final Fantasy XI. He is a former minister of the Federation of Windurst's Optistery, an institution that houses both a library and an observatory. He famously sacrificed himself to defend his nation from the Yagudo Theomilitary during the Crystal War and is therefore referred to as the "Hero of Windurst".

Karaha-Baruha earned a reputation as a genius during his time as a student of the Aurastery, Windurst's School of Magic. He was able to complete all available courses in a year and achieved multiple degrees. This made him a prime candidate for recruitment by any of the Federation's five ministries. Eventually he selected the Optistery and worked through its ranks to become its leader. Having achieved this position, he made great strides to increase cooperation between his division and the remaining four.

At some point during his rise to fame Karaha-Baruha initiated a secret romance with the Star Sibyl, Windurst's head of state. Through the course of this relationship he learned a terrible truth known to only the Sibyl herself: their nation would be obliterated within their lifetime. Having foreseen a future in ruin, the Star Sibyl had gone to the Full Moon Fountain to consult Fenrir, Windurst's guardian, and learned that the first Star Sibyl had agreed to this fate in ages past.

Karaha-Baruha could not accept Fenrir's promise of annihilation, however, and devoted all his time to developing a means to overcome the approaching devastation. A decade before the Crystal War, aged only seventeen, he concluded that conventional magic was a dead-end and that the powers of the natural world had been stretched as far as they could go. He therefore proposed a new discipline that would draw upon the energy of living things to exceed the limits imposed by nature. Other ministers objected to this on the grounds that it would endanger life by its very premise but the Star Sibyl approved the research. Karaha-Baruha intended to harness the might of Fenrir itself to avert catastrophe.

Five years later he received permission to construct a new laboratory in the Toraimarai Canal. In this place, sometimes referred to as the sixth ministry or "Animastery", he would be able to leverage the power of the Horutoto Ruins to further develop the art he named summoning. The entrance to the facility was sealed so that only Karaha-Baruha could open it and the increasingly reclusive minister began to fade from the public eye. A portal was created connecting the lab to the Star Sibyl's private chambers, however, and she continued to support him in his endeavor.

Karaha-Baruha's work was nearly complete at the dawn of the Crystal War. He only needed to review the Book of the Gods, a tome containing the first Star Sibyl's account of her interaction with Fenrir. The Star Sibyl denied him this final request, however, as Warlock Warlord Robel-Akbel had advised her that Karaha-Baruha's life would be gravely endangered if he attempted a summoning. The minister reminded the Star Sibyl that the safety of the nation outweighed his own well-being. As the Federation had already suffered bitter defeats at home and at Fort Karugo-Narugo, the Star Sibyl reluctantly relinquished the book and her Diza Star, which was required to unlock it.

With the Book of the Gods in hand Karaha-Baruha learned that the first Star Sibyl had created a magical device called Gleipnir to control Fenrir and establish the Great Beast's pact with Windurst. She had then broken the relic into pieces and entrusted them to Windurst's allies in that era. With time running short, Karaha-Baruha dispatched Lehko Habhoka and his mercenary confidant to recover the fragments so that they might bring the Great Beast to heel again.

During his preparations Karaha-Baruha contacted Manustery Minister Zonpa-Zippa and requested the use of his best Cardians. Though the puppetmaster usually commanded these units himself, Zonpa-Zippa reluctantly complied by setting his Ace Cardians to follow Karaha-Baruha. The Optistery minister did not employ them for menial labor, however. Karaha-Baruha copied Zonpa-Zippa's designs and built a new automaton, Joker, using a piece of his own soul. He then designated his creation as the leader of the Aces. Given that the artificial soldiers were being mass produced for the war and that weaker models were programmed to obey their stronger counterparts, this effectively gave Joker command over all other Cardians.

When Lehko Habhoka returned with Gleipnir Karaha-Baruha met him in Heaven's Tower. As they conversed they were approached by Robel-Akbel. Karaha-Baruha used the opportunity to ask the Warlock Warlord about his earlier warning to the Star Sibyl. Nobody should have known enough about Karaha-Baruha's research to convince her that it would be dangerous to continue. Robel-Akbel remained silent and Karaha-Baruha proceeded to question his very identity. The Robel-Akbel he had known had been a gentle soul, much unlike the Warlock Warlord, and a classified report suggested that he had died during the initial Yagudo raid on Windurst.

Robel-Akbel finally replied that he was not the person he used to be and that his mission was, in part, to save Karaha-Baruha from himself. Karaha-Baruha shrugged off the implication that he would seek his own death but Robel-Akbel challenged him to deny it. Stunned that the Warlock Warlord could know his unspoken intentions, Karaha-Baruha stood quietly as Robel-Akbel reasserted his position and ordered the minister to prepare for battle.

Karaha-Baruha returned to the Animastery and reassembled Gleipnir. By the time he emerged again an army of Yagudo and Kindred was advancing on the city. Karaha-Baruha found Robel-Akbel conversing with a mercenary and interrupted them to ask a question. He suspected that the adventurer was from another time and wondered what Windurst was like then. Learning that happier days were ahead, he offered thanks as Robel-Akbel sent the traveler away.

Alone with the Warlock Warlord, Karaha-Baruha confessed that he was confident in his calculations but terrified at having unraveled Robel-Akbel's true identity. Seeing no point in further misleading the minister, Robel-Akbel admitted that he was Karaha-Baruha from another timeline. His attempt to summon Fenrir had failed, Windurst had been overrun, and the Star Sibyl had been murdered. When given an opportunity to return to the past he had assumed the identity of Robel-Akbel, whom he knew would die in the first battle, and made every effort to change the outcome of the war.

Encouraged by the future the adventurer had described to him, Karaha-Baruha was certain that they would avoid a repeat of his counterpart's misfortune. The pair began to depart but the Star Sibyl intercepted them. The Warlock Warlord, having long since replaced his love for her with the resolve to rewrite history, continued to the battlefield alone.

The Star Sibyl made one more attempt to dissuade Karaha-Baruha from his work. He again reminded her that his life was a small concession to make for the Federation's survival. At his urging she tearfully gave the order for him to save Windurst. Karaha-Baruha accepted, embraced the Star Sibyl, and proceeded to the Manustery to make his final preparations.

The Battle of Windurst was underway and the defending Mithra Mercenaries were soon overwhelmed. Karaha-Baruha advanced onto the city's battlements and found a child, Ajido-Marujido, channeling magic against the approaching horde. Assured that Windurst would do well in the hands of such enthusiastic youth, he called to the Federation's soldiers and bid them to leave the rest to Fenrir. Robel-Akbel joined the minister atop the wall to ensure that nothing would be left to chance. Together they summoned the Great Beast and unleashed it upon the Beastmen. Though the Yagudo turned their artillery on the avatar, their forces were helpless against its ravenous maw.

Having reduced the invading army to tatters, Fenrir turned back to Windurst to finish the troops that had penetrated the city's defenses. Karaha-Baruha and Robel-Akbel began to lose control, however, and could not defeat Tzee Xicu the Manifest as she loomed above them. Exhausted, the summoners collapsed and were absorbed by the Great Beast. The genius of Karaha-Baruha was lost.

The consequences of the minister's disappearance were immediate. No longer bound and conflicting with the minds it had consumed, Fenrir raged away from Windurst as Tzee Xicu teleported back to her stronghold. Lehko Habhoka, who had sworn to finish Robel-Akbel's work, joined Perih Vashai to hunt the Great Beast and vanquish it with the Bow of Light. The avatar's death marked the end of Windurst's golden age: the Horutoto Ruins lost power, the magical waters of Sarutabaruta began to wither, the Great Star Tree started to rot, and the Full Moon Fountain became dark. Having been tied to Karaha-Baruha's lifeforce, Joker deactivated and left the Federation's Cardians without a leader. The confused automatons promptly abducted Zonpa-Zippa and locked him away for years to come.

Windurst survived the night, however, and the Yagudo were dealt such heavy casualties that there was no threat of continued conflict. Karaha-Baruha was therefore declared the "Hero of Windurst". In spite of this honor, the grieving Star Sibyl ordered that his summoning magic never be practiced again.

In the peaceful days following the Crystal War the Star Sibyl conceals Windurst's festering wounds and secretly wishes that Karaha-Baruha could return to advise her. This stirs what little energies remain in the land and slowly draws together pieces arranged by the summoner twenty years earlier. The Star Onion Brigade accidentally revives Joker and, owing to the connection between such dolls and their creators, inadvertently draws Karaha-Baruha back from death as well. His spirit is still merged with Fenrir, however, and he roams Vana'diel as a creature known as the bearer of darkness.

Eventually Joker awakens to his purpose and the remnants of Karaha-Baruha that he carries. He gathers the Cardians that had followed him during the war and orchestrates the meeting of the bearer of darkness, the Star Sibyl, and Ajido-Marujido, who had since grown to become the Orastery minister. At the Full Moon Fountain the energy from the Cardians and the Sibyl's Diza Star converge with the bearer to energize the water and restore Fenrir to life. The Star Sibyl then renews Windurst's pact with the Great Beast. In the aftermath Ajido-Marujido cannot help but wonder if even his own involvement had been planned by Karaha-Baruha from the beginning.

Karaha-Baruha appears in the Final Fantasy Trading Card Game with his in-game model. His card is Thunder-elemental. 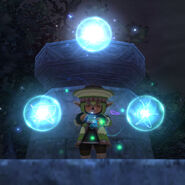 Karaha-Baruha summoning Fenrir in the Battle of Windurst.

Karaha-Baruha summoning Fenrir in the Battle of Windurst.

Karaha-Baruha succumbing to exhaustion during the summoning.