Order of the Twin Adder

Eorzea's children are as trees in a grove—bending to the wind like the willow, or bearing it like the oak. Yet live how we might, the wind shall blow.

Elder Seedseer Kan-E-Senna is a non-player character in Final Fantasy XIV. She is the Elder Seedseer of Gridania, a title bestowed upon those chosen to mediate between the elementals of the forest and the living people within it.

She is the eldest of three Padjal siblings, her sister being Raya-O-Senna, and her brother being A-Ruhn-Senna. She was admitted into the Conjurer's guild Stillglade Fane before her sixth nameday for predicting devastating fires and locust infestations.

After becoming Elder Seedseer she left Gridania to live with her siblings, aiding them in maintaining peaceful relations between the Elementals and mankind. She returned to Gridania in reaction to the increasing number of natural anomalies, and reinstated the Order of the Twin Adder to ready the forest city-state for what lies ahead.

As Gridania is geographically closest to the Garlean Empire, as well as adjacent to Mor Dhona, it is considered the first line of defense against the threats of both. It was Kan-E-Senna who first sent word to the other Grand Companies to request the reformation of the Eorzean Alliance.

The outcome of this battle was long since decided. Better to retreat now, than risk a massacre. This dark, stifling presence... Who...or what...?

Kan-E-Senna was present at the Battle of Carteneau overseeing Gridania's forces. She caught glimpse of a mysterious figure watching her and the other leaders from a distant hill. In the aftermath of Bahamut's carnage, Kan-E-Senna tended to the wounded, including a Garlean youth found beneath a damaged Reaper. She healed him despite his prior affiliation; years later, he would join her honor guard, the Keepers of the Entwined Serpent.

Before the troops returned for Gridiania, Kan-E-Senna located and recovered Archon Louisoix's damaged staff—the Tupsimati—from the flats. She returned it to Yda Hext and Papalymo Totolymo upon her return to the city-state.

If the Adventurer begins their journey in Gridania, Kan-E-Senna is first met by personally congratulating them on assisting the God's Quiver Bow on repelling agitated Ixali summoners at the Guardian Tree. She welcomes them to attend the Greenbliss festival as its Emissary, where Gridanians celebrate the ceremony of peace between man and elementals. She grants the Adventurer a blessing with the elementals, and is surprised by the Crystal of Light the Adventurer possesses, marking them as blessed by Hydaelyn. She explains to the Adventurer of the Warriors of Light, brave souls who protected Eorzea during the fight against both primals and the Garlean Empire, who were blessed in a similar manner.

Abruptly, the Adventurer experiences an Echo vision of Kan-E-Senna present at the Battle of Carteneau, where she notices a mysterious figure overseeing the battle between Eorzea and the Empire. As the Grand Companies and the assisting forces suffer tremendous casualties, she encourages Raubahn Aldynn and Merlwyb Bloefhiswyn to withdraw the troops. Experiencing this Echo vision causes the Adventurer to collapse. They visit Kan-E-Senna once again after recovering from their collapse, where she is pleased to see their recovery. She asks of them to serve as Gridania's envoy to the other city states, requesting they participate in the remembrance ceremonies for the Battle of Carteneau.

As the Adventurer disembarks from Gridania, Kan-E-Senna is present in the crowd overseeing their departure, smiling up at them.

Whether or not the Adventurer started in Gridania, or they visit Gridania for the first time from another city state, Kan-E-Senna is met in the Mih Khetto Amphitheatre delivering a memorial speech in remembrance of the Battle of Carteneau, which is also attended by Alphinaud and Alisaie Leveilleur.

This section about a character in Final Fantasy XIV: Heavensward is empty or needs to be expanded. You can help the Final Fantasy Wiki by expanding it.

This section about a character in Final Fantasy XIV: Stormblood is empty or needs to be expanded. You can help the Final Fantasy Wiki by expanding it.

Kan-E-Senna is met during the Eorzean Alliance meetings in Ala Mhigo, offering the insights of Gridania and their information against the Empire. She reports sightings of mysterious towers throughout the Black Shroud to Merlwyb not long after the discovery of similar structures in La Noscea.

She asks Alphinaud on his advice regarding establishing a specific force that could combat those in service to Garlemald and the Ascian Fandaniel, reflecting on his time leading the Crystal Braves. Kan-E-Senna welcomes the Ixal and Sylphs to the table of the Eorzean Alliance, newly renamed as the Grand Company of Eorzea at the suggestion of the Warrior of Light and Alphinaud now that it encompasses all groups of Eorzea.

Upon the arrival of Fourchenault Leveilleur to Gridania, she hosts him and the Scions in the Lotus Stands. She expresses gratitude towards the late Louisoix for his actions at Carteneau many years ago in protecting Eorzea and all of Hydaelyn. Fourchenault agrees with her sentiment regarding his father, but admits that he disagreed with his actions, believing that he went against the Sharlayan philosophy of charting history, rather than interfering with its course. Kan-E-Senna asks him if Sharlayan will be offering its assistance against the Final Days, which Fourchenault declines. After a heated exchange between father and children, Fourchenault disowns Alphinaud and Alisaie and leaves, as Kan-E-Senna apologizes for the incident to the twins.

This section about a character in Final Fantasy XIV: Endwalker is empty or needs to be expanded. You can help the Final Fantasy Wiki by expanding it.

Kan-E-Senna is a Padjal woman in a long white dress with a fur collar. She has long blonde hair that she keeps in a woven bun above her shoulders, braided together to create a soft shaped circle. Her eyes are green, and she carries a staff unique to her, the Claustrum, which is a Conjurer's arm crafted out of a blue crystal. She has several leather hand straps around her wrists and fingers, and she wears white wool boots.

Like all Padjal, she has thin horns protruding from her head, which she keeps behind the leaf-shaped circlet that all Seedseers wear.

No road is closed to those true of heart.

Kan-E-Senna is calm and composed, seldom showing unease. A kind-hearted soul, she is considerate toward those around her, and most anyone that she feels deserving of her respect. She's virtuous, generous and selfless, willing to show mercy even to her enemies; she saved countless lives in the aftermath of the Battle of Carteneau using her healing capabilities as a White Mage.

She has a penchant for deviating from the norm: despite her political importance as a leader, she is unafraid of entering dangerous environs and nurturing foreign relations with Gridania. She is often the first in the Eorzean Alliance to propose—and support—reforms and new courses of action. The other leaders of the Eorzean Alliance and the Scions of the Seventh Dawn respect her for her wisdom, knowledge and leadership, often having her as the de facto spokesperson for the Alliance.

The Elder Seedseer has a sentimental side, not above looking up to people, including Archon Louisoix Leveilleur. Occasionally, she will offer him a silent prayer, hoping that she has done his legacy proud.

A miniature doll in Kan-E-Senna's likeness can be summoned as a minion through the "Wind-up Leader" item if the player has the veteran's reward. One of the three city-state leaders can be summoned, depending on the player's Grand Company allegiance.

Kan-E-Senna was developed for the Seventh Umbral Era storyline, as well as to give Gridania a "city leader" type of character for players to interact with and rally around. She appears substantially in A Realm Reborn. While her concept art, which was still used in a few promotional materials for late Legacy patches, shows her with coppery hair (the same as her siblings), in-game her hair is bright blonde.

Her weapon, the Claustrum, is also the Relic staff in Final Fantasy XI. In Eorzea's lore, the Claustrum was lent to General Osbern during the Battle of Firesand Banks, a critical point in the Autumn War between Gridania and Ala Mhigo. The staff was taken after Osbern's defeat, and remained in Ala Mhigan hands for a time.

Kan-E-Senna was voiced by Cindy Robinson in the English version. She shared her voice actor with Einheria from Bravely Default. Starting in Final Fantasy XIV: Heavensward, she is voiced by Hannah Arterton.

Kan-E-Senna in the Grand Companies artwork.

Artwork of Kan-E-Senna in a bikini for Final Fantasy XIV Online Anniversary.

Kan-E-Senna on the Death Unto Dawn patch artwork.

Kan-E-Senna praying from Tales from the Calamity: Of Friends Lost and Found.[1]

Kan-E-Senna in Gridania from Tales from the Calamity: Of Friends Lost and Found.[1]

In-game render from A Realm Reborn.

Kan-E-Senna at the Lotus Stand.

Kan-E-Senna at the Gridania airship landing. 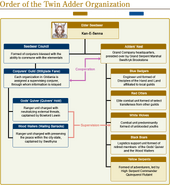