Jeff Schine[1]
Kam'lanaut is one of the two remaining Zilart princes in Final Fantasy XI. He is the Archduke of the Grand Duchy of Jeuno, and rules alongside his brother Eald'narche.

In truth, he is the younger brother of Eald'narche, although he looks older due to the fact that Eald'narche came into contact with one of the five Mothercrystals.

Upon the destruction of the Zilart, Kam'lanaut and his brother slept frozen in the tower of the Delkfutt's reaction chamber until many years later when Raogrimm reactivated the crystals. When they awoke, the two of them found themselves in a different time, with the connection to Tu'Lia broken. The princes could not repair the connection, as Raogrimm's existence was creating too much "noise" within the crystals.

Eventually, they traveled to the nearby town of Jeuno. The two princes then set about improving their position, revealing the knowledge of Synthesis and crystal-powered engines to the people. Their influence took the small fishing town of Jeuno to a bustling city in a short period of time. By the time the rumblings of the Crystal War had begun, Kam'lanaut had already become the leader of Jeuno, second only to Jeuno's home country, the Republic of Bastok. When the Beastmen began amassing, Kam'lanaut proposed to the president that Jeuno secede from Bastok. This allowed the Republic to focus their troops on their home front, and also gave the Zilartian princes the power they desired.

During the Crystal War, Kam'lanaut gathered the four nations together, helping them to unite under the common banner of the Allied Forces of Altana. It was this union that allowed the Enlightened Races to drive the beastmen back, carving a path to the home of the Shadow Lord himself. When the beastmen were defeated, the Archduke was hailed as a hero, and the two Zilart princes had earned the trust of the people as they had hoped. It was this trust that allowed them to restart their plans to open the Gate of the Gods. The Zilart princes formed the Armathrwn Society to this end, gathering the few Zilart left, as well as some loyal Kuluu.

Twenty years later, in the Age of Adventurers, the princes' plan finally began to come to fruition. The Archduke enlisted the aid of the Adventurer sent by their region of origin in order to obtain magicite from each of the three beastmen strongholds. When this Adventurer went on to defeat the Shadow Lord a second time and end his resurrection, the princes put their plan into action.

With the guidance of the Kuluu and a holograph of Dawnmaiden Yve'noile, the Adventurer finds the princes and attempts to stop them from reviving the Chrysalis Core. When Kam'lanaut is defeated, Eald'narche casts him aside, using Verena to open the pathway to Tu'Lia. Kam'lanaut fades back to the Mothercrystal as Eald'narche restores the path to Tu'Lia.

Both Kam'lanaut and Eald'narche reappear in the "Apocalypse Nigh" quest (available only to players who complete both the Rise of the Zilart and Chains of Promathia expansion storylines and challenge Bahamut), where both are simultaneously fought in a rematch at the Empyreal Paradox. They trick the player and their companions into resurrecting them and other deceased villains to achieve their goal—to become the next Keeper of the Apocalypse, bringing about the destruction of Vana'diel and opening the Gate of the Gods. However, the combined might of the player and companions destroy them once more.

Kam'lanaut is encountered twice, once in Zilart Mission 8: Return to Delkfutt's Tower, and again alongside Eald'narche in the quest Apocalypse Nigh. 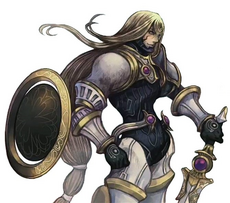 Kam'lanaut is a playable character and a representative of Final Fantasy XI. He is a warrior of Spiritus and is classed as a Specialist character.

He was introduced in the September 2018 update for the arcade version of the game. The following month, he was added to the PlayStation 4 version as the fourth playable character of the Season Pass. 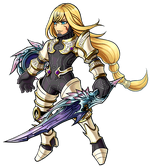 Kam'lanaut appears as a playable character and boss. 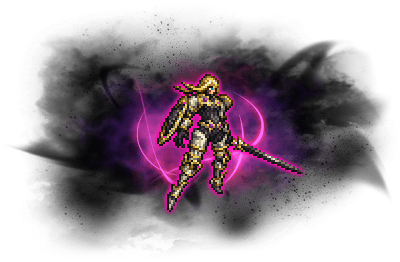 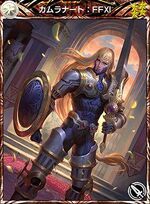 Kam'lanaut appears as a card in Lord of Vermilion II.

Kam'lanaut's card (back) in Lord of Vermilion II.

In the Chains of Promathia expansion, the Jeunoan officials do not acknowledge Kam'lanaut or Eald'narche's disappearances, stating that they are either "away" or "busy", and all official matters are instead presided by the Duke Vicarious Esha'ntarl. This is because players may not have completed the Rise of the Zilart expansion, which requires advancing to at least Rank 6 to begin, whereas the Chains of Promathia missions have comparatively low requirements to begin and do not require any particular rank. 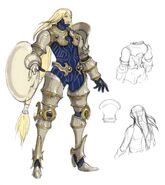 Concept art of Kam'lanaut in battle.