Kalm is a village in Final Fantasy VII located outside of Midgar. Unlike the bustling metropolis nearby, Kalm is a quiet town with only a few shops, a bar, and an inn. The economy is based upon mining in the Mythril Mine, but during the time of Final Fantasy VII due to recent activities of Midgar Zolom outside the mines, work has stopped.

During development of Final Fantasy VII, the town was at one point called Elm (エルム, Erumu?). This can be seen in concept art of the World Map and in the game files where Kalm locations are prefixed "elm".[1]

During Shinra Electric Power Company's military bombing operation, the target of which was supposed to be 50 kilometers north of Kalm, due to equipment malfunction, the target is thought to be Kalm itself. The resulting destruction leads to an incident similar to Nibelheim Incident where the entire township is destroyed.

Survivors are shipped to the Shinra Mansion in the town of Nibelheim, where they are thought to have died. The town is rebuilt, and the incident covered up. It is thought the survivors were executed to support the cover-up, but as many of them are test subjects to Professor Hojo's experiments in fusing Materia into human beings, it is more likely they were either mutated or killed due to the experimentation.

Veld, the leader of the Turks, Shinra's intelligence agency. is within the township during the attack. He loses his arm, receiving a Materia-augmented prosthetic so he can continue working for the Turks.

The sleepy village is the first town Cloud, Barret, Tifa, Aeris, and Red XIII come across after leaving Midgar. When the party stays at the inn, Cloud tells the tale of the incident with Sephiroth destroying Cloud and Tifa's home town of Nibelheim several years ago. Once the story ends, the party leaves.

Later on Barret's daughter Marlene is sent to Kalm to escape the Shinra Electric Power Company. Despite the town's proximity to Midgar, it is not destroyed when Meteor falls. Marlene views the destruction and saving of the Planet by the Lifestream and Holy from Kalm.

Following Meteorfall and the destruction of Midgar, there were many people who traveled to the town to take refuge. Residential houses became emergency shelters and the inn offered free rooms to refugees but the sheer volume of them forced some people to live on the streets. The near-immediate introduction of a new disease that began to plague the populace did not help matters.

Under the threat of death from an unhappy public blaming the Shinra Electric Power Company for Meteorfall, Rufus Shinra, now residing in Kalm, concocted a plan to redirect the populace's energies toward rebuilding their homes, using the wreckage from Midgar and build a new town on the eastern-side of Midgar.

One year after the events surrounding Kadaj and Sephiroth's return, and three weeks after the disappearance of an investigative team of more than 38 people into a previously sealed section of the Midgar ruins, Kalm comes under attack by an unknown military force during a night-time festival celebrating the recovery from Meteorfall.

Targeting individuals who had not been infected by Geostigma for capture, Vincent Valentine, who was residing in the town at the time of the festival to meet with Reeve Tuesti, disrupts the raid and supports the World Regenesis Organization in pushing the mysterious army out of Kalm, but not before he encounters the Tsviets Azul the Cerulean and Shelke the Transparent.

Cait Sith later comes upon some citizens from Kalm within Sector 0 underneath Midgar, captured during Deepground's raid and still contained within the Dragonfly equipment containers, and watches helplessly as they are sacrificed en mass to awaken Omega.

Kalm is located to the North on Gaia's Eastern continent to the East of the Midgar Wasteland. 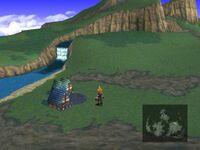 The party enter the village square from the south-west corner. The inn, shops, and various residences can be accessed from here.

There are three shops located on the upper level of the town, where the player can purchase Materia and mythril-based weapons and armor.

The inn is located to the left of the village entrance, and visiting it is essential to move the story forward. It is here that Cloud recounts his experiences as a member of SOLDIER to the party.

A mother and daughter live at this house.

And old man and his dog live at this house.

There is a locked chest that has no means of opening. This chest had originally contained the Titan Materia, but the idea was scrapped and it was moved to Gongaga instead.

A man and two siblings live at this house.

There is a treasure with a Peacemaker inside. The player can look out the window.

The Kalm traveler and another woman live here.

Located through a tunnel beneath the upper level of the village, the bar is frequented by miners who are out of work due to the Midgar Zolom.

The shopkeeper at the Item Store manages the Item Shop.

The Weapon Store is a shared store that sells battle equipment and Materia. Though there are two doors to the establishment and appears as a semi-detached building, there is no wall between the store.

When Barret leaves the inn after Cloud's story and asks for Cloud to get a move on:

When talking to the woman who mentions that Mako is convenient (values only change if the characters are in the present party):

When talking to the woman who mentions that the old ways were better (values only change if the characters are in the present party):

Kalm is the home of the Kalm traveler who desires various items from around the world. He is found at Traveler's House 2f.. If the player brings him the items he desires, they are plentifully rewarded.

"Ahead On Our Way" from Final Fantasy VII

Like in many towns, "Ahead On Our Way" (旅の途中で, Tabi no Tochū De?) plays in Kalm in Final Fantasy VII. When visited on disc two after Meteor is summoned, the music changes to "Anxious Heart".