Kalm is a village in Final Fantasy VII located outside of Midgar. In contrast to the bustling metropolis nearby, Kalm is a quiet town with only a few shops, a bar, and an inn. It is home to many miners who work in the Mythril Mine, but during the time of Final Fantasy VII due to recent activities of monsters outside the mines, work has stopped. Cloud and his party visited Kalm as their first stop after leaving Midgar, and in an inn, Cloud told the group of his story of when Sephiroth destroyed his hometown.

During Shinra Electric Power Company's military bombing operation, the target of which was supposed to be 50 kilometers north of Kalm, due to equipment malfunction, the target was thought to be Kalm itself. The resulting destruction leads to an incident similar to Nibelheim Incident where the entire township was destroyed.

Survivors were shipped to the Shinra Mansion in the town of Nibelheim, where they were thought to have died. The town was rebuilt, and the incident covered up. It was thought the survivors were executed to support the cover-up, but as many of them were test subjects to Professor Hojo's experiments in fusing Materia into human beings, it is more likely they were either mutated or killed due to the experimentation.

Verdot, the leader of the Turks, Shinra's intelligence agency. is within the township during the attack. He loses his arm, receiving a Materia-augmented prosthetic so he can continue working for the Turks.

During the chapter "The Tragedy of Five Years Ago", the sleepy village became the first town Cloud, Barret, Tifa, Aerith, and Red XIII visited after leaving Midgar. When the party stayed at the inn, Cloud told the tale of the incident with Sephiroth destroying Cloud and Tifa's home town of Nibelheim several years ago. Once the story ended, with a mix of confusion and amazement,[1] the party leaves.

Later on, Barret's daughter Marlene was sent to Kalm to escape the Shinra Electric Power Company. Despite the town's proximity to Midgar, it was not destroyed when Meteor falls. Marlene viewed the destruction and saving of the planet by the Lifestream and Holy from Kalm.

Following Meteorfall and the destruction of Midgar, there were many people who traveled to the town to take refuge. Residential houses became emergency shelters and the inn offered free rooms to refugees but the sheer volume of them forced some people to live on the streets. The near-immediate introduction of a new disease that began to plague the populace did not help matters.

Under the threat of death from an unhappy public blaming the Shinra Electric Power Company for Meteorfall, Rufus Shinra, now residing in Kalm, concocted a plan to redirect the populace's energies toward rebuilding their homes, using the wreckage from Midgar and build a new town on the eastern-side of Midgar.

One year after the events surrounding Kadaj and Sephiroth's return, and three weeks after the disappearance of an investigative team of more than 38 people into a previously sealed section of the Midgar ruins, Kalm came under attack by an unknown military force during a night-time festival celebrating the recovery from Meteorfall.

Targeting individuals who had not been infected by Geostigma for capture, Vincent Valentine, who was residing in the town at the time of the festival to meet with Reeve Tuesti, disrupted the raid and supported the World Regenesis Organization in pushing the mysterious army out of Kalm, but not before he encountered the Tsviets Azul the Cerulean and Shelke the Transparent.

Cait Sith later came upon some citizens from Kalm within Sector 0 underneath Midgar, captured during Deepground's raid and still contained within the Dragonfly equipment containers. He watched helplessly as they were sacrificed en mass to awaken Omega. 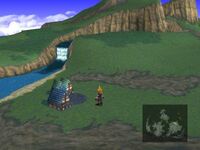 Kalm is located to the North on Gaia's Eastern continent to the East of the Midgar Wasteland. The town is comprised of buildings with European timber-frame architecture, and is fortified by stone walls with crenelations.

The town is centered around a village square in the middle, with a fountain and a water wall at the center. The rest of the buildings, which include an inn, tavern, shops, and various residences, surround the village square, which is overlooked by a tall watch tower built into the stone walls. Although the town is powered by mako energy,[2] minimal technology can be seen used in the town, aside from the electric lights in place of candle lights.

The presence of Shinra dominates Kalm, with its residents being completely divided on if they have benefited from mako energy. Though many of the residents express loyalty to Shinra and great gratitude at how mako energy has made their lives more convenient, others are either skeptical of Shinra or upset to see plants and animals die as a result of them. Many of the residents of the town are former coal miners who worked at the Mythril Mine, but were put out of work when the monsters appearing as a result of mako reactors made it unsafe to mine. Kalm's residents [2]

Kalm is visited by the party for the chapter "The Tragedy of Five Years Ago", when the party arrive straight after leading Midgar. In the quest, little of the town itself is visited, as most of the time is spent in Cloud's flashback within Nibelheim. However, the town has several non-player characters to interact with for dialogue about the world.

Kalm's main attraction later on is the Kalm traveler, a non-player character who trades various items from around the world. Trading these items grants the player extremely rare rewards, including the Underwater Materia, Master Materia (Master Magic, Master Command, and Master Summon), and a Gold Chocobo.

"On Our Way" from Final Fantasy VII

Like in many towns, "On Our Way" (旅の途中で, Tabi no Tochū De?) plays in Kalm in Final Fantasy VII. When visited on disc two after Meteor is summoned, the music changes to "Anxiety".

A jazzy arrangement of "On Our Way" is a music disc playable in jukeboxes in Final Fantasy VII Remake, bought from the Sector 6 Slums item shop for 50 gil.

During development of Final Fantasy VII, the town was at one point called Elm (エルム, Erumu?). This can be seen in concept art of the World Map

and in the game files where Kalm locations are prefixed "elm".[3][4] 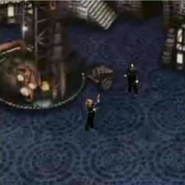 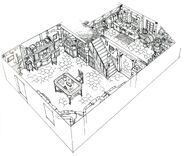 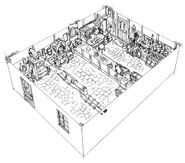 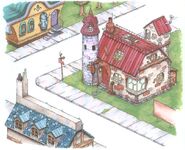 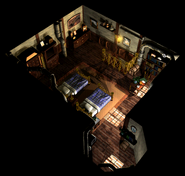 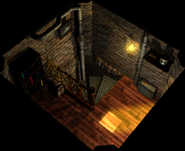 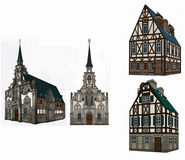