Mwa, ha, ha.... Humans and their desires! I'm free at last! I bring you destruction... I bring you terror... I am Czar! Prepare yourselves!

The Kaiser Dragon, also known as CzarDragon, is a dummied superboss in Super Famicom/SNES versions of Final Fantasy VI. It is not possible to fight it normally, but it can be fought if the ROM is patched appropriately.

The CzarDragon seems to have gotten far in development. It has a taunt message that was even translated for the English version, and possesses the standard immunities and decent statistics as is typical of a powerful boss, but its attack script is comprised of only attacking physically.

Rumors about how to fight the dragon in the game's Super NES release exist, such as the one involving petrifying the Blue Dragon. Of course, all the rumors are false, and the Blue Dragon is immune to Petrify.

An exact copy of the CzarDragon exists within the code of the Advance, mobile and PC releases. This is likely done because the SNES version's data was ported to the GBA version, and it was left in to avoid creating bugs.

Although dummied from the original game, CzarDragon is fightable in the form of Kaiser Dragon in the Game Boy Advance, mobile and PC remakes. Kaiser shares CzarDragon's gimmick as the "leader" of the eight legendary dragons, as well as his superboss status and color scheme. Kaiser's sprite is also similar to the sprite for CzarDragon, simply with a longer tail and wings. Kaiser and Czar share the same Japanese name, and their English names echo each other: Czar (цар) is the Bulgarian word for emperor, while Kaiser means the same in German. Though Kaiser Dragon's speech is longer, the ending directly paraphrases CzarDragon's speech: 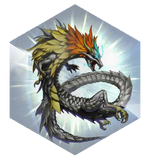 Kaiser Dragon is a light-elemental summon. His special ability is Revenge Blast, which deals damage according to the user’s HP lost and also lowers the attack, speed, and magic of all enemies for three turns. Kaiser Dragon's default design for its rank 5 and 6 Phantom Stones are based on the sprite from the Super Nintendo version of Final Fantasy VI.

A creature of the same name appears as in Super Mario RPG: Legend of the Seven Stars, another game designed by Square. It is the boss of the Barrel Volcano.

[view · edit · purge]Kaiser is the German title meaning "Emperor", derived ultimately from the name of Julius Caesar. Many languages use a descendant of the word Caesar to mean "emperor", such as Russian царь (tsar) and Greek Καῖσαρ (Kaîsar).

"Kaiser" and "czar" are both words for rulers derived from the Latin word Caesar so using czar may have been a workaround for the character limit in the original version. Ted Woolsey, who localized the game, may not have known at the time that it was text pertaining to dummied material.

[view · edit · purge]A dragon is a legendary creature, typically with serpentine or reptilian traits, that features in the myths of many cultures.

Retrieved from "https://finalfantasy.fandom.com/wiki/Kaiser_Dragon_(Final_Fantasy_VI_dummied_enemy)?oldid=3219010"
Community content is available under CC-BY-SA unless otherwise noted.