Satoshi Nakai
Kaiser Dragon is a light-elemental Eidolon that appears in Final Fantasy Dimensions II. The summon can be purchased as a signet for Wrieg in the Babil Tower exchange shop for 5,000 Babil points at the start of Chapter 5-1 of the Crystal of Time arc.

Kaiser Dragon is a decent signet if it is obtained at the moment it becomes available, providing Wrieg of an adequate boost in magic and speed. Its Kaiser Breath ability allows Wrieg to deal four elemental strikes to all enemies, allowing him to take advantage of enemies with multiple weaknesses. As the player progresses through the later portions of the Crystal of Time arc, Kaiser Dragon is easily outclassed as more signets become obtainable.

In the original free-to-play versions, Kaiser Dragon could only be obtained through the game's summon draw shop and could be equipped by any party member. Kaiser Dragon was an SS rank signet.

The summon is based on the Kaiser Dragon superboss from Final Fantasy VI. The default designs for its first two signets are based on the sprite of the dummied enemy from the original Super Nintendo version of Final Fantasy VI; however, its final artwork changes its design to resemble its superboss sprite from the Game Boy Advance port.

Kaiser Dragon's special ability is Revenge Blast when summoned into battle, which deals neutral-elemental damage based on Wrieg's current HP and lowers the attack, speed, and magic of all enemies for three turns. Summoning Kaiser Dragon costs 3 bars from the Summon Gauge.

The following are the abilities Wrieg can learn from Kaiser Dragon: 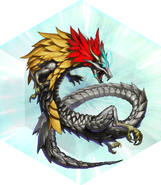 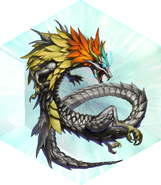 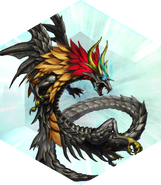 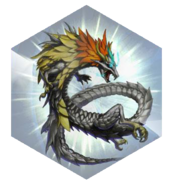 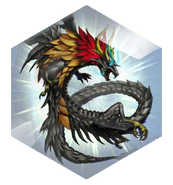 [view · edit · purge]Kaiser is the German title meaning "Emperor", derived ultimately from the name of Julius Caesar. Many languages use a descendant of the word Caesar to mean "emperor", such as Russian царь (tsar) and Greek Καῖσαρ (Kaîsar).