With Final Fantasy IV being one of the most respected titles in the series, Kain Highwind has made more than a dozen appearances across compilations, anthologies, and other works from Square Enix. The following is a list of Kain's many appearances. 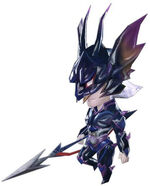 The Wind-up Kain minion can only be obtained by registering a Collectors Edition of the expansion pack Final Fantasy XIV: Heavensward.

Kain's dark side appears as one of the monsters that can be summoned by Mira after being purchased as downloadable content. He takes on his appearance from The After Years. Kain is a melee summon with somewhat low attack; however, with his fast speed and cost of one slot on a tower floor, investing some NP to summon and max out the levels of an army of Kains makes for a very effective melee force.

Costume banner.
Add a photo to this gallery 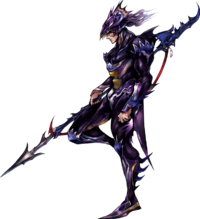 Kain appears as a playable character. He is officially on the side of Cosmos, but works with Golbez to help the Warriors of Cosmos survive to the next cycle of war by attacking and defeating them before the Manikins do, as they will not be revived if beaten by the manikins. Kain defeats Bartz, Firion, and Zidane, and he is implied to beat most of the other original Warriors of Cosmos, before Tifa, whom he rescues from an encounter with Ultimecia, talks him into returning to the survivors and admitting what he's done. At this time, Kain accompanies them to the Lands of Discord, and the group sacrifices themselves to seal the portal the manikins are emerging from.

Tetsuya Nomura stated prior to the announcement of Dissidia 012 that Kain was considered as a candidate to appear in the original Dissidia, either as a secret character or the antagonist representing Final Fantasy IV. He was ultimately excluded, but Tetsuya Nomura has said he personally wanted Kain in the game and that Kain would be in a sequel to the game if one were made.[1] 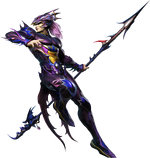 Kain is a playable character and a representative of Final Fantasy IV. He is classed as a Speed-type character.

Kain appears as a playable character.

Cecil's best friend and dearest rival. He feels deeply, but is ill-practiced in expressing that which he feels. Though he swears to stand by Cecil in his revolt against their unjust king, his heart is consumed by his secret love for Rosa and as a result of this weakness his conflicted mind is easily taken over by Golbez.

Kain appears as an unlockable character, and is obtained by collecting Navy Crystal Shards, from Dark Notes only.

Kain has the highest raw strength tied with Sephiroth, and possesses good agility which can be boosted further. Most of his abilities focus solely on power, so the player can safely prioritize Kain as a pure enemy crusher. As a downside, he lacks a Limit Break and his ability slots are limited.

Cecil's friend and rival since childhood and commander of the dragoons of Baron. He is controlled by the enemy and uses base betrayal to deliver the Crystals to his dark master, but he will atone before the end.

Kain is an unlockable character, and is now obtained by collecting Turquoise Crystal Shards.

While Kain gains a number of defensive skills, his high Strength coupled with obtaining a Limit Break that synchs with his power ensures he's a still a force to be reckoned with. A major downside is that his Agility has been drastically reduced, and his Spirit is the weakest of all playable characters, making him vulnerable to magic-based enemies. 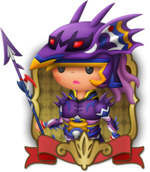 Kain is an unlockable character, and is obtained by collecting Light Crystal Shards.

His limit, Dragoon's Pride, deals damage to boss-type enemies in direct proportion to Strength and Agility.

Kain's The After Years portrait.

Kain's The After Years sprite.

Enemy sprite.
Add a photo to this gallery

Cecil's close friend—and friendly rival. The resourceful commander of Baron's Dragoons, a highly efficient squad on par with the Red Wings, he is manipulated by Golbez into becoming Cecil's adversary.

Kain appears as a Legend character. He uses Jump and Double Jump to assist the player. The spear Kain is depicted with in his Yoshitaka Amano artwork and in Dissidia 012 Final Fantasy is available as a weapon. It was given away as a reward for leveling up Kain to Lv.99 during Part 2 of the Shattered Worlds FF Special Event as an SSR ranked weapon called the Wyvern Spear.

Kain's icon.
Add a photo to this gallery

Jump (UUR+).
Add a photo to this gallery

Spiral Blow (UR+).
Add a photo to this gallery

Final Fantasy Artniks (2).
Add a photo to this gallery

Cecil cares for this commander of the Baron Dragoons, despite his many deceits.

Kain is an exclusive character only available from the Premium Character Shop as a random downloadable content, he uses the Blaze Jump during battle.

Kain is a standard character, also appearing as an early boss. He is automatically recruited as the First Time Reward for completing Mist Cave on the Classic difficulty track. He has also appeared in the Challenge Events The Burning Blade and A Summoner Grown, although many players may have received a Greater Growth Egg in his place. The only advantage to his recruitment in these events was a much earlier acquisition of his Memory Crystal. 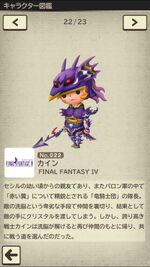 Kain appears as a summonable vision and optional playable character. He has two variants: the 3-5★ "Kain" (カイン, Kain?, lit. Cain), and a helmless version, the 5-7★ "Atoning Dragoon Kain" (究道の竜騎士カイン, Kiwamumichi no Ryūkishi Kain?). Both are Rare Summons, their job is listed as Dragoon and their role is Physical Damage. However, their stats and skillsets differ (with Atoning Dragoon Kain being a vast improvement over the original) as do their Trust Master rewards.

Many cards are depicted with Kain and are lightning-elemental.

Trading card of Kain as the Hooded Man.

English trading card of Kain.
Add a photo to this gallery

Kain.
Add a photo to this gallery

Kain appears as a card and summonable creature in Lord of Vermilion II, along with other characters from Final Fantasy IV as part of a special cross promotion.

Back of Kain's card.
Add a photo to this gallery

Cain, which can be promoted to Dragoon Cain, are units and their ability is Jump.

Dragoon Cain.
Add a photo to this gallery