A knight clad in dragon-like armor, with spear in hand. Though not one to display emotion, he is compassionate and possesses a strong sense of justice.

Kain Highwind is a warrior of Cosmos and one of the new characters introduced in Dissidia 012 Final Fantasy. He is the third representative of Final Fantasy IV. He was a Dragoon who served alongside his best friend, Cecil, in Baron, until Golbez took control of him and used him to attack his friend and obtain the crystals. In time, Kain resisted Golbez's control and redeemed himself. He specializes in high-speed aerial combat, fighting with his lance and Jump, along with a variety of other Dragoon abilities and Wind spells.

In the game's story mode, his main rival is Exdeath.

Kain's default outfit is based on his concept art by Yoshitaka Amano for Final Fantasy IV.

He wears dark purple armor with blue accents, rows of spikes along his shins and forearms, and a winged helmet stylized like a dragon's head. Kain's eyes are perpetually shadowed in his default outfit; in a cutscene, Kain is seen without his helmet on, but he faces away from the camera, concealing his face. In his EX Mode, Kain's armor becomes bright blue and white he removes his helmet, a reference to the ending of Final Fantasy IV where he was seen without his helmet.

Kain's first alternate outfit, "Noir Dragoon", is based on concept art of Dark Kain for Final Fantasy IV: The After Years.

Kain wears blue and red armor with scale patterns and spikes on his shoulders and elbows, and a helmet that covers his eyes with green lenses. His EX Mode is his Holy Dragoon class change from The After Years, a suit of blue and white Dragoon armor with small wings on the shoulders and a winged hairpiece.

Kain's second alternate outfit "Light Seeker" is his from The After Years.

Kain wears blue garments with a white hood, boots, a wide belt, and a tattered brown cape. His Holy Dragoon form is identical to the EX Mode for his second outfit, but colored purple.

Kain's manikin, Delusory Dragoon, is dark blue with its hands, face, hair, and the tails of its armor pale white. 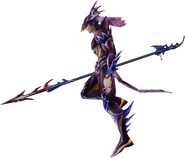 Kain without his helmet. 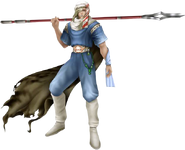 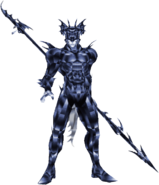 Kain's manikin, Delusory Dragoon.
Add a photo to this gallery

Kain's default weapon is based on his lance in concept art.

It is a long, blue spear with a black tip and a wing-like ornamentation on the other end. The weapon is unnamed in Dissidia 012 but is identified as Kain's Lance in other spin-offs. In his EX Mode the weapon takes on a light blue and white color scheme to match his armor. In his first alt outfit, Kain's lance is based on concept art of Dark Kain.

It is a purple lance with red tips, and the non-striking end is forked. Kain's lance in his EX Mode is taken from his Holy Dragoon concept art, a blue and white lance with a long, thin blade, and a single side prong.

His lance in his second alt outfit is taken from his Hooded Man artwork and is a simple red lance with a wide head.

In his EX Mode, he wields the same lance as a Holy Dragoon but colored purple. All of Kain's lances have carrying straps attached to them in their concept art, but Dissidia 012 removes them.

Kain's lances in his three outfits.

Kain's lances in EX Mode in his three outfits. 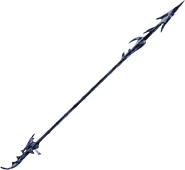 Lance wielded by Kain's Manikins.
Add a photo to this gallery

There was hope in my actions. Not hope—but a gamble, perhaps. I took a risk to believe in a chance, rather than live as a pawn to disappear.

Much like his Final Fantasy IV personality, Kain is calm and collected, and keeps to himself a lot. Despite some of his actions, Kain is well-meaning and selfless, often acting in the best interest of his peers ahead of his own safety, sometimes without caring about how it personally reflects on himself. Kain often provides the wisdom of the group, and while he acts alone, he does seem to find strength in others, with Tifa acting like an emotional crutch to lean on.

During Prologus, Kain joins a conversation between Lightning and Jecht about the Warrior of Light. Lightning does not see eye to eye with the Warrior, and Kain puts forward the idea that her arrogance may not live up to her strength, before suggesting that she works with the Warrior to witness his prowess. After the Warrior separates from Lightning, she and Jecht ask Kain if he thinks they are capable; he tells them that he would not be here if they disappointed him.

After receiving his dormant crystal, Kain receives a visit from Golbez who divulges on the war's cycle of death and rebirth; in order for the revival to work their memories of the last war and their original home worlds must be erased. Golbez mentions Kain fell in the previous cycle, but still retains memories of their own world, and that he will recover more with every battle he wins. Cecil enters and attacks Golbez, who teleports away. Before rejoining the others, Kain asks Cecil if he remembers anything about their world, to which Cecil responds he can only vaguely remember Kain.

Kain informs the Warrior of Light of what he learned and the two reach the agreement they should defeat the other warriors of Cosmos before the manikins do, who are the only ones that can permanently kill the warriors summoned by Cosmos and Chaos. Kain proceeds to defeat and kidnap Bartz, which alerts the attention of the Chaos faction when he tries to take Lightning out as well. However, he ended up sparing her due to the Chaos faction being alerted, not willing to risk giving away his allies' location by fighting and defeating her.

After knocking Firion out, Exdeath asks Kain to disclose the whereabouts of the warriors of Cosmos, and turns a group of Delusory Dragoons on him when he refuses, with Kain emerging triumphant. After taking out Zidane, he intervenes in Tifa's fight with Ultimecia and protects her.

Despite Tifa's joy at Kain's arrival, Ultimecia gloats about Kain's treachery and he flees with Zidane. By the time she finds him, Kain begins to suffer the toll of his fight as he tells Tifa to leave, but when she offers him her last Potion to Kain out of trust, he tells her the truth about the cycle. While Tifa remains positive, Kain asserts he cannot guarantee she will survive the path she has chosen.

After they reunite with Laguna, Yuna, Lightning, and Vaan, Exdeath and Golbez appear to tell them the number of manikins in the surrounding area is low. Kain catches onto the fact that the manikins are heading towards Cosmos, and stays behind to fight Exdeath while the other five hurry to her aid. Kain defeats manikins of the warriors he kidnapped, and finally Exdeath, which was partially due to Golbez's interference.

Golbez expresses gratitude to Kain, as his actions have given him a chance to stop the cycle and save Cecil. He tells him he will not make it back alive if he leaves, but Kain resigns himself to his fate. Despite his injuries, Kain joins the other five in their stand against the manikins at the Empyreal Paradox, where they eventually succumb to them and lose their power. Kain sheds his light and fades away.

After the player defeats the Chasm in the Rotting Land gateway and is directed to the Southern Lufenia gateway, Kain can be found wandering near Gulg Volcano Ring, provided he is not currently in the player's party. When spoken to he vanishes with the words "prepare yourself". As the world of Confessions of the Creator is a hypothetical nightmare world where the cycles of war kept going and Feral Chaos killed all summoned warriors, this Kain is likely a spectre of the Kain of this alternate world. He can no longer be found after the player conquers the Southern Lufenia gateway.

Kain is the main focus of "Kain's Quest 012: A Dragoon's Betrayal". After failing to defeat Lightning, Kain abandons his plans to put her to sleep with Exdeath pursuing him. Encountering Ultimecia who questions his actions and his alliance with Golbez, Kain defeats her and sends her into retreat, then meets Squall. Kain defeats Squall and puts him to sleep, and has a brief encounter with Tidus, who asks if Jecht is on Kain's list of targets. Kain continues on after this to Ultimecia's Castle where he senses another warrior nearby, leading into Tifa finding him and the defeated Zidane at the area soon after.

In "Cecil's Quest 012: A Re-encounter With a Close Friend", Cecil recovers his memories of him and Kain serving in Baron's military together, and Kain is happy his friend remembers him. The two duel to commemorate the occasion, Kain telling Cecil that in time further memories will become clear.

Kain is described in the game as a Tactical Striker. He fights by using attacks that let him dash and leap through the air with ease. Pressing

after using one of his melee Bravery attacks will cause him to dash through the air, allowing him to continue his attack while his opponent is still staggering. Additionally, Kain jumps higher than any other character in the game, as he is a Dragoon, but has slow movement.

Kain can choose the orientation of where the final blow of his aerial attacks will send the opponent by tilting the analog stick up, down, or keeping it stationary, alternatively leading to wall rush or a chase sequence. His HP attacks are effective at both close and long ranges and are versatile across many altitudes. A downside to his battle style is that he lacks long-ranged attacks, and his attacks are slow, making them easy for a prepared player to fight back. His list of attacks is also comparatively small.

Kain is the final boss during Chapter 1 of Lightning's Treachery of the Gods storyline. 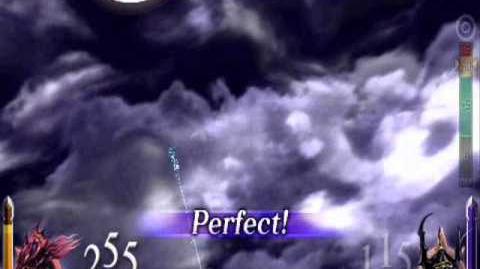 Kain's EX Mode is Holy Strength. Kain removes his helmet and his armor turns white and turquoise blue. While in EX Mode, he gains the special attack "Lancet" activated by pressing

. The attack strikes from directly below the opponent and has a small charge time, but restores Kain's HP equal to the HP damage it inflicts and quickly restores Kain's Bravery to its base value. Kain is able to move while using Lancet, and like his melee attacks the player can press

after using it to dash towards the opponent, even if Lancet does not hit them.

Kain's EX Burst is Dragoon's Pride, where Kain launches himself into the air at high-speed. The player has to input the button commands that appear to fill a meter, with the commands changing twice at random. If the meter is filled Kain reaches the peak of his jump with two moons shown in the sky behind him, and quickly descends and drives his lance through the opponent, leaving a beam of light that consumes them in an explosion that deals HP damage. If the player fails to fill the meter Kain will not reach the peak of his jump and less Bravery damage is done. 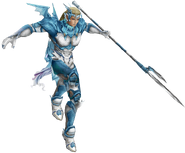 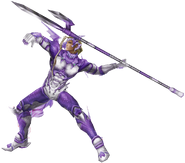 Kain's second alt outfit in EX Mode.
Add a photo to this gallery

Kain interferes in Cecil and Golbez's battle in an FMV sequence.