In patch 5.1 Vows of Virtue, Deeds of Cruelty, Kai-Shirr became a client for the Custom Deliveries system.

Kai-Shirr is a blue haired mystel with blue eyes. He wears a hempen tunic with knee high culottes and brown leather shoes.

Initially introduced as a troublemaker who intended to steal Alphinaud's idea to get into Eulmore, Kai-Shirr is just a boy who wanted to get into the city to see his friends and fulfill the promise of being together again in paradise. Over time he grows as a person and assists in making the city thrive. 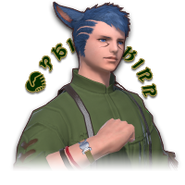 Add a photo to this gallery
Spoilers end here.

His name may be derived from the Chinese phrase 开始 (kāi shǐ), which means "start/to begin" (anew).