Secret ninja blade that sometimes stops enemies. Can be used with Spellblade.

Kagenui (影縫い, Kage Nui?), also known as Stunner, is a recurring weapon in the series. It is often one of the most powerful short sword in the game, and is sometimes affiliated with the Dark element as well as the Stop status.

Kagenui is the most powerful dagger, and is only found in the Sealed Temple in the Advance remake. It provides 123 Attack, 126 Accuracy, and +5 Speed, as well as having a 25% chance of inflicting Stop when attacking with it.

Ninja sword that may cast Stop upon striking an enemy.

Kagenui (Stunner in the SNES and PlayStation versions) is the second strongest weapon for Shadow, with Oborozuki being the strongest for him in the Advance and 2914 ports. It is found in the Cultists' Tower, and has an attack power of 202 as well as randomly cast Stop when attacking. It enables the Runic command.

Kagenui is a low-ranked ninja sword that requires 40 LP and the Ninja Swords 1 license to wield. It provides 62 Attack, is Dark-elemental, and has a chance to inflict Slow upon hit. Ninja Swords are among the fastest weapons with 1.97s charge and 1.2s action time; only daggers are faster. It costs 10,000 gil to buy at Phon Coast and Archades, and can also be made through the Bazaar after escaping the Barheim Passage by selling Dark Magicite x5, Giant Feather x5, and Festering Flesh x4.

In the Zodiac versions, it provides 81 Attack, 13 Evade, 18% Combo Rate, has a 10% chance of inflicting Slow on a target, and requires the Ninja Swords 1 license for 100 LP. It can be found as a treasure in Barheim Passage (The Zeviah Span) or Cerobi Steppe (North Liavell Hills), dropped from Striker (1% chance), or bought from the bazaar for 3,800 gil by selling Giant Feather x5, Festering Flesh x4, Dark Magicite x5. It can be equipped by the Shikari class.

Kagenui is a level 85 parrying equipment that provides +1 Attack, +61 Defense, and Bravery Boost on Block +15%.

The Kagenui is a level 60 parrying equipment that provides +1 Attack, +60 Defense, and Bravery Boost on Block by +3%.

This sword attacks shadows, but its efficacy at night is itself shady at best.

Kagenui grants +2 to Attack. It can be equipped by Samurai, Ninja, and Auron.

An enchanted ninjato that can stop enemies cold by cutting their shadows.

A kind of ninja katana from a faraway world. Its small size relative to other swords is characteristic of weapons made for clandestine use by ninjas. Those who master this weapon could stitch their enemy's very shadow to the ground, rendering them immobile. It is said that a certain assassin, who always kept his dog by his side, made use of this blade in a faraway world.

Kagenui (FFVI) is a katana that provides 186 ATK and enables usage of the ability Shadow Conjure Blade. It is obtained as the Super Trust Mastery Reward from Assassin Shadow. 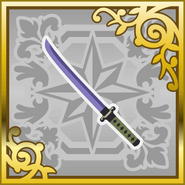 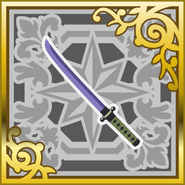 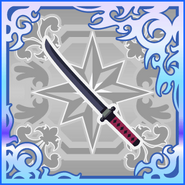 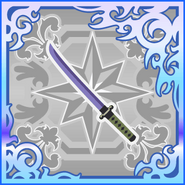 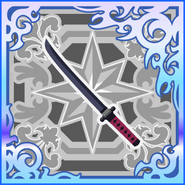 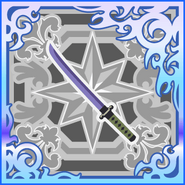 [view · edit · purge]Kagenui is Japanese for "shadow sewing" or sometimes can be referred as "shadow binding".