I've never known Sephiroth. I just... I sense him there. It's unbearable to think that Mother might want Sephiroth more than...

The novel, Final Fantasy VII The Kids Are Alright: A Turks Side Story, written by scenario writer Kazushige Nojima, sheds some light on the events that happened before Final Fantasy VII: Advent Children.

Like the other embodiments of Sephiroth's will, Kadaj resembles Sephiroth to a great degree and is described by Vincent Valentine as a "larval" form of Sephiroth. Kadaj wears black leather clothing with gauntlets and a coat, which he keeps zipped up. The image of a single wing is sewn on the back of his coat as an allusion to Sephiroth. He has shoulder-length silver hair that partially covers his face and green cat-like eyes. Kadaj's weapon is the Souba, a katana with two parallel blades that he carries in a sheath on his lower back.

So what if I'm a puppet? Once upon a time, you were too!

Kadaj embodies Sephiroth's cruelty and insanity. He is devoted to Jenova and dedicated to finding her but is unaware of Sephiroth's influence over Jenova. As a result, Kadaj is insecure over Jenova "choosing" Sephiroth over him, and though he does not fully understand who Sephiroth is, he tells Rufus Shinra he can sense his presence.

Kadaj is arrogant and mocks Rufus and the Turks, and thinks of Cloud Strife as his "brother" through Jenova, but considers him a traitor to their cause. When driven to anger Kadaj attacks with fury, such as when he attacks Cloud when Cloud reminds Kadaj he is only Sephiroth's pawn. Nomura describes him as "talking quickly, then speaking slowly or breaking into laughter for no apparent reason".

Kadaj is a highly skilled swordsman and battles Cloud competently one-on-one. When Cloud is weakened due to Geostigma, Kadaj can defeat him, and is strong enough to defeat both Reno and Rude alone. Kadaj can summon hordes of Shadow Creepers from the Lifestream and uses materia to summon Bahamut SIN. In Advent Children Complete, Kadaj infiltrates Healen Lodge by transforming into a black mist.

Upon walking into the water at the Forgotten City it turns dark and the Jenova cells within the children become active when they drink it. This may be a form of Limit Break, as Kadaj glows like other characters in the film when they use their Limit Breaks.

In The Kids Are Alright-, Kadaj appears before certain individuals under the guise of deceased persons from their past to manipulate them to help him search for Jenova, reminiscent of Jenova's transformation power. He can vanish and reappear in another location, and to become immune to attacks from firearms, likely extensions of his ability to disperse into mist. He can take away people's physical pain as well as re-grant it, as evidenced by his "mending" Evan Townshend's shoulder wound and his encounter with Evan in the mountains.

Unlike most antagonists with great physical and magical power in the Compilation of Final Fantasy VII, Kadaj doesn't have Jenova cells, and doesn't acquire materia until halfway through the events of Advent Children. His unusual magic abilities are derived from the negative Lifestream that makes up his body, while his great physical strength and combat proficiency come from being a personification of Sephiroth's memories.

Final Fantasy VII The Kids Are Alright: A Turks Side StoryEdit

Hello, there. I’m Kadaj. An old friend of Kyrie’s. Pleased to meet you, Tseng of the Turks.

Kadaj was born in a pond of blackened water near Nibelheim. He saves Kyrie from sinking in the pool and ends up conversing with her at Dr. Drake's office, with the latter seeing him as a friend who died in a fire, due to Kadaj's ability to mimic the appearance of one's dead relatives, a trait he shares with Jenova. Kadaj later disguises himself as Dr. Drake and Fabio Brown and takes away Evan Townshend's pain from the surgery when his arm was shot.

When confronting him at a cabin on the mountain, he gives him back his ability to feel pain. Kadaj later attempts to manipulate Kyrie into supplying him information on Jenova's remains, but Kyrie shoots at him. Kadaj attacks a Turk helicopter and tricks it into shooting itself down with a missile. He goads Kyrie into going into one of the crevasses and pursues them in the caverns, only to end up diving into the Lifestream and dissolving after Evan kicks the still-living remains of Jenova into it.

My reunion, bet you're dying to watch...

Kadaj to Cloud right before turning into Sephiroth

Kadaj's trip into the Lifestream, like Sephiroth before him, does not kill him. He revives himself within the North Crater as the Turks are collecting Jenova's remains, as well as having two more Remnants of Sephiroth, Loz and Yazoo, come to existence alongside him. They defeat the Turks, before deciding to locate Jenova's head, which the Turks escaped with.

Kadaj appears on the Midgar Wasteland to summon Shadow Creepers to attack Cloud while he is out riding his motorcycle. After speaking to one of the Turks over the phone, he recalls his monsters and sets off to find Rufus Shinra. Arriving shortly after Cloud leaves Rufus, Kadaj reveals that the plague Geostigma is caused by the remnants of Jenova in the Lifestream and that those infected are part of a plan for a second Jenova Reunion that will recreate Sephiroth. Geostigma alone is not enough and Jenova's remains are needed, and Kadaj believes Rufus knows where they are.

With a group of infected children brought to the Forgotten City, Kadaj tells them Geostigma is caused by their bodies rejecting Jenova's influence, and that her presence makes them brethren. Kadaj has the children drink from a pool of dark water, activating the latent "reunion instinct" in their Jenova cells. Cloud battles Kadaj and his brothers, but outnumbered and weakened by his own Geostigma infection, is defeated and saved by Vincent Valentine. Vincent tells Cloud of the true nature of Geostigma, and the impending rebirth of Sephiroth it could mean, although he does not yet reveal Kadaj's connection to Sephiroth.

With the reunion instincts of the children to guide them, the Remnants look for Jenova's remains in Edge. Loz and Yazoo battle the Turks and Kadaj summons Bahamut SIN to attack the city. During the attack, Kadaj confronts Rufus and confirms that Sephiroth is about to be reborn. After Cloud and his friends defeat Bahamut SIN, Rufus reveals Jenova's remains in a box concealed under his cloak.

Casting the box off the building where they are standing, Kadaj leaps after it catching it mid-air. The ensuing chase between the Remnants and Cloud along the highways into Midgar, apparently killing Yazoo and Loz. Kadaj gains the lead and stops at the Sector 5 Church to inspect Jenova and is horrified at what is left of her and cries. Cloud bursts in and an enraged Kadaj attacks him. Aerith calls a geyser of healing water to erupt from the flowerbed, wounding Kadaj and causing him to flee. The water cures Cloud of his Geostigma.

Cloud confronts Kadaj outside the ruins of Shinra Headquarters. Kadaj is unaware of what to do with Jenova's remains now that he has them, and when Cloud points this out, he attacks. Back to his full strength, the battle ends with Cloud as the victor and Kadaj hanging from the edge of a tower. Kadaj leaps into the air and absorbs Jenova's remains into his body, leading to the recreation of Sephiroth moments later.

After Sephiroth is defeated, a mortally wounded Kadaj is reformed from his dissolving remains and attempts a halfhearted attack on Cloud, but instead collapses into his arms. Weakly calling him "brother", Cloud holds him while Aerith speaks to Kadaj from the Lifestream. Believing her to be Jenova, Kadaj calls her "mother" and happily dissolves with her guidance. 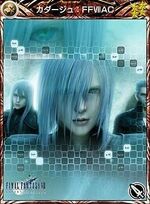 Kadaj is featured in a trading card alongside Cloud, depicting an official artwork for Final Fantasy VII: Advent Children. Kadaj also has two cards of his own, both ice-elemental.

Sephiroth was an incredibly powerful rival for Cloud in the game. We needed a villain just as powerful for this film, but maybe even more so given the short amount of time. That's why we made Kadaj so evil, in addition to being insane.

Kadaj was designed by Tetsuya Nomura. Before Kadaj was named, or his brothers were designed, the character model and artwork for Kadaj were called "Lost Name". Kadaj was the first remnant to be shown in film footage, appearing during the Tokyo Game Show in a short trailer in which he fights Cloud, who is armed with the Buster Sword as the Fusion Swords had not been designed yet. For this scene, Nomura attended the motion capture session and modeled for Kadaj himself to demonstrate his fighting style using a bamboo sword. At this point, Kadaj was referred to as "the mysterious enemy".

Kadaj was made the youngest remnant and their leader to provide the psychological terror of an unstoppable child. At first, Kadaj was meant to be a violent teen acting out irrationally. Kadaj and his brothers could be the youngest villains in the Final Fantasy series; though physically in their teens, the trio has only existed for two weeks when they attacked Edge. The subplot of the remnants pursuing Shinra to find Jenova's head was added to give Kadaj a purpose to pursue.

Two scenes featuring Kadaj—his conversation with Rufus during the attack on Edge, and his death scene where he hears Aerith—were going to be cut from the final product, but Nomura pushed for them to be included to expand on his character. The staff envisioned Kadaj as a reminder of what Cloud once was—a puppet to Sephiroth's will—which led to the inclusion of the line in which Kadaj reminds Cloud of this. The line endeared Kadaj to the staff, which led to the development of more scenes featuring him.

In a key art for Advent Children (see gallery), Cloud is holding Kadaj's wounded body as he did Aerith's in the game.

Kadaj is voiced in Japanese by Shotaro Morikubo. He shares his Japanese voice actor with Naghi Minatsuchi from Final Fantasy Type-0. Morikubo's voice helped shape Kadaj as a dazed youth with an insane streak. Nomura chose Morikubo as he felt Kadaj would have an accent, and Morikubo had a peculiar speech pattern he found fitting. Morikubo joked that Kadaj's lines were difficult to get right due to the sudden shifts in tone his insanity called for, and it was only after failing to get them right and "losing his cool" that the desired effects would be achieved. Co-director Takeshi Nozue described Kadaj as being easy to model as the strength of Morikubo's voice work gave a strong impression of how Kadaj should look.

He is voiced by Steve Staley in English.

[view · edit · purge]Khadaj is Persian for "incomplete." This refers to Kadaj's role as a remnant of Sephiroth.

In-universe Kadaj got his name from Kyrie, as he took on the appearance of a deceased friend of hers.