iOS, Android, Windows 10
Justice Monsters Five is a pinball game in the world of Final Fantasy XV that Noctis enjoys playing. It is available in the game itself, with tables found in Crow's Nest Diners around Lucis, and in a cafe in Altissia (one of the Altissian machines being more expensive with different prizes). Justice Monsters Five was formerly an app for iOS and Android, revealed during the Uncovered: Final Fantasy XV event on March 30, 2016.

The Justice Monsters V app was scheduled to launch in April 2016, but was delayed and eventually released worldwide on August 30, 2016. Over 90,000 people registered during the pre-registration phase.[1] A Windows 10 version was planned, but never released. The game ended its service on March 27, 2017[2], and has been removed from all app stores as of Winter 2019.

The evil Grim Gargoyle and his Bahamut Grand Fleet have launched an invasion of the peaceful Nova Galaxy, threatening the freedom of its monster denizens. Back once more to fight for what's right, the Justice Monsters zoom in to save the day!

Are you ready? High five for justice!

Justice Monsters Five is an arcade pinball game found at every Crow's Nest Diner, and at a cafeteria in Altissia easily accessed via the gondola service. Most machines cost 10 gil per play, while Altissia has one "special" machine (the one in the corner nearest to the water) that costs 10,000 gil to play and yields better rewards.

Though Justice Monsters Five resembles a pinball table in Final Fantasy XV, it doesn't play like traditional pinball, but like a mix of pinball with elements of top fighting, gachapon monster collecting, pachinko, and the spatial dexterity testing aspects of arcade shoot-'em-ups. The player cannot "tilt" the game, or to nudge or shake the machine in contrast to real life or other virtual pinball games.

The player has a team of four monsters and uses them to launch their corresponding ball at enemy monsters, which come in waves. Different waves involve different boards and enemy formations, occasionally accumulating into a boss fight with the character Lord Vexxos.

Monsters come in different varieties and attributes, determining their physical and technical aspects, such as as their ball's capabilities, including launch trajectory, weight, and even their ricochet potential, and stats, such as HP, defense, and attack. Each monster has a special attack known as a Hero Tech that can be executed when its Tech Gauge is filled, a ripple that hits adjacent foes for significant damage.

Monsters share three Charge Types, or abilities that come into play when their ball is readied and launched at the highest velocity.

Monsters have elemental attributes that give strengths and weaknesses to other corresponding elemental alignments. The cycle goes:

The game involves a play field where the goal is to defeat and clear out enemy monsters at the top of the field. The bottom of the field is the player's side, and consists of a large concave platform that acts as the plunger and flipper for the ball. Activating the platform sends the ball to the top of the board, and pulling it back charges the active ball, accelerating it. This allows for traditional skill shots and has the active ball launch on its Charge Type.

Monsters have HP and are defeated when it is depleted. The player launches the ball to strike at the monsters who fight back through rhythmically using their version of Hero Tech, requiring the player to time their attacks and strategize how and when to strike. When all enemy monsters on the field are defeated, the player moves to the next round. If the player's active monster is defeated, it is removed for the rest of the game; if the player loses all of their monsters, the game is over.

Combos occur when the ball ricochets off enemy units and other accelerating obstacles. Performing combos continuously increases damage. Boss monsters have weak points, as indicated by a target pointed to that part of the body.

When one's monster has returned to their side of the field, the player can switch out their monsters to other team monsters. If one's monster is launched into the fray and is actively ricocheting, if the player switches to another team monster and activates their Hero Tech with a full SP Gauge, that monster's ball will launch onto the field and can actively team up to play.

Hitting the bumpers on the sides and in the middle earns Slot Points as indicated by the gauge in the center of the field. As the player hits the bumpers the gauge fills. When the gauge reaches the maximum of 200 points, a slot game pauses the main game. The gauge is independent of slaying monsters and will reset upon starting a new area. The player is allowed 4 rolls per area as indicated by the 4 yellow dots that appear one after another after each slot game, so it is smart to hold off on killing all enemies that a boss is on until filling all yellow spaces. Depending on the matched slots, a payout is given accordingly:

Different play fields change the layout and positions of monsters, as well as various obstacles like kickers and bumpers. Randomly, various recovery items can be found on the start of a new play field or dropped on to the field during play. As the player level up more difficult and higher leveled monsters spawn. As with traditional arcade games, Justice Monsters Five has no ending, and with the technology it's featured on, no kill-screen. The player can quit at any time.

Treasure Points are gained from playing the slot game and progressing. They determine the prize given upon finishing a game upon one's desired level of completion. Prizes differ from machines played in Lucis and in Altissia.

Playing it the first time earns the High Five for Justice! achievement/trophy.

The minigame's soundtrack is available in the music player.

The official guide mentions a car skin obtainable from the now-defunct Justice Monsters Five app. However, this functionality was never live and thus no such decal was ever in the game.

The characters of Justice Monsters Five and its intergalactic setting bear a color scheme and setting similar to the fourth adapted series of the Super Sentai franchise, Power Rangers ZEO. Its shorthand name, Justicemon, and the feature of collecting and boasting a variety of player monsters, hearkens to the gachapon-inspired alternate world monster raising series Pokemon.

The western catchphrase "High five for justice!" humorously references the Rocko's Modern Life episode "The High Five of Doom," in where the character Filburt Shellbach is believed to be a part of an invading alien race whose method of domination involves stealthily maneuvering through Earth society and wiping out the populace by innocuously vaporizing them with friendly gestures for a deathly high five.

The characters such as marduk, grandhorn and wingvern (as seen in the gallery) are reminiscent of enemies that appeared in Final Fantasy Type-0, another game made by the team that also made Final Fantasy XV.

The in-game grocery chain JM Market has a problem with being coincidentally associated with Justice Monsters Five, as the chain exclaims with advisories that they have nothing to do with the franchise.

Square Enix and IGN held a pre-launch event for Final Fantasy XV a week before the game's release. Square Enix brought Justice Monsters Five-themed pinball machines to the event that fans could play. 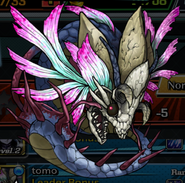 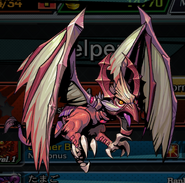 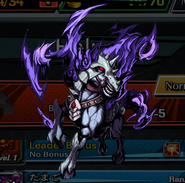 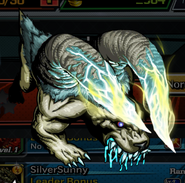 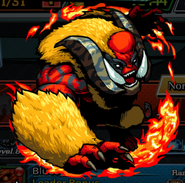 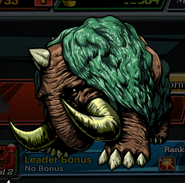 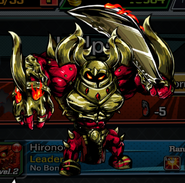 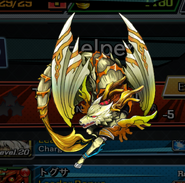 [view · edit · purge]A monster is any creature, usually found in legends or horror fiction, that is often hideous and may produce fear or physical harm by its appearance or its actions. The word "monster" derives from Latin monstrum, meaning an aberrant occurrence, usually biological, that was taken as a sign that something was wrong within the natural order.