This village youth has been spending quite a lot of time in the castle lately.
He is pragmatic and as sharp as a tack. But he can also be childish and, for some people, a pain in the neck.

If you're scared, you don't have to come along, you know.

Jusqua is a playable character in Final Fantasy: The 4 Heroes of Light. A young boy with a cool, mysterious aura, he joins Brandt's group, but considers him a rival. Although the game follows a job system, Jusqua is depicted as a staff-wielding magic user in official artwork. He is met in the North Caves.

Jusqua is a young man with short, slicked back platinum blond hair and grey eyes. He normally wears a long green coat with black fur trim and a silver clasp at the top over a white shirt and brown mittens. He wears white trousers with knee-high brown boots.

His animal form is a rooster with feathers of the same color as his hair.

When using the crowns, Jusqua's appearance changes according to which job he is using.

Although Jusqua is intelligent, he has a pessimistic and lazy attitude that prevents him from accomplishing much; if a problem is too hard he doesn't bother to try. He is easily annoyed by others and initially finds the other three party members intolerable. After he abandons Aire and she is turned into a cat Jusqua feels responsible and goes to great lengths to find a cure for her. He befriends Thauzand in Urbeth and feels a debt of gratitude to him for his help.

Jusqua's attitude changes and he becomes to view the other Heroes of Light as friends rather than irritants. 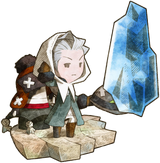 Jusqua is sent by King Horne to investigate the North Caves and was given a spell book for the task, even though magic is forbidden in Horne. When Brandt passes through the caves on his way to the Witch's Mansion he is attacked by a minotaur, and Jusqua helps him by using Fire magic on the monster and defeats it. Jusqua thinks Brandt can't handle the danger and tells him to go back, but they team up as Brandt is on a mission to save Princess Aire from the witch Louhi.

Jusqua and Brandt arrive at the Witch's Mansion and find Aire's bodyguard, Yunita, who joins them. They rescue Princess Aire on the top floor and she joins after berating them for taking so long. The Witch of the North attacks them, claiming Aire was payment for a contract King Horne had made with her. After they defeat her, the Crystal appears before them and dubs them the Heroes of Light, charging them to stop the spread of darkness in the world.

When the party returns to Horne they find its residents turned to stone. Members of an investigation team from Liberte look into it and offer the group shelter in their town. Jusqua doesn't think they can help solve the situation and accepts the offer. Yunita and Brandt elect to search out a cure on their own, and Yunita convinces Jusqua to take Aire with him to safety.

In Liberte, Jusqua and Aire are given a refugee house and explore the town. They meet a young boy named Apollo, whose parents were kidnapped by pirates. Aire agrees to rescue them and they go to the Pirate Hideout where they discover that Captain Drake is a disguised Trollud and defeat it, then free the real Drake and Apollo's parents. Aire rescues a fairy named Lilibelle, but as Jusqua cannot see her, it appears to him Aire has started talking to herself.

Aire, who had already complained about the plainness of their quarters, becomes insistent they find treasure to decorate their house. She learns from Lilibelle that the town's Whirlpool contains treasure and drags Jusqua there the next night in spite of warnings of a curse on the items. They defeat the monster guarding the final treasure chest, but Jusqua, fed up with Aire's demands, tells her to get lost and leaves. He returns to the house and sleeps until he realizes Aire hasn't returned.

Jusqua finds a stray cat and concludes it must be a cursed Aire. Feeling responsible for her transformation, he takes the cat to the merchant town of Urbeth to find someone to cure her. The local sorcerer asks for 10,000 gil to do it, so Jusqua looks for work around town to raise the money. He befriends Thauzand, the leader of the Four Merchant Lords, and finds Yunita but she is too despondent to join him. After being paid, the sorcerer tells Jusqua to sleep at the inn while he works the spell. During the night, "protective" puppets sold to the townspeople by the sorcerer transform into monsters and attack. Jusqua teams up with Yunita to save the town and Thauzand gives them a ship in thanks. Jusqua is too ashamed to explain Aire was cursed due to his negligence, so he leaves in the middle of the night and sets off for Invidia on his own.

Jusqua takes the ship to the Ice Caverns and finds the sorcerer, but loses to his Behugemoth. Brandt arrives and saves him from the sorcerer's puppet. Brandt reveals the real Aire is in Spelvia and the cat Jusqua's been chasing is just a stray. The two arrive in the snowy town of Invidia where they meet a young girl named Rekoteh and help her hatch the dragon egg in the center of the town. Jusqua suggests heating it with Firaga while Brandt wants to hit it with a Mythril Hammer. Neither approach works, so the two boys and Rekoteh go to the Invidia Underground to obtain the Dragon's Harp. The artifact wakes the Dragon, and they fly it to Spelvia.

When they arrive in Spelvia, Jusqua and Brandt are reunited with Aire and Yunita, who had tried to save Rolan from his inner darkness but were unable to. Jusqua and the others arrive in Rolan's chamber and are forced to defeat him in battle, but this releases darkness throughout the world and sends them back in time to a period Chaos is trying to corrupt the world, and the Hero of Light, Rolan, was meant to rise up to oppose him with the aide of legendary weapons. The group now has to collect the legendary weapons of light to fight the minions of Chaos, taking up Rolan's place in history as the force to oppose the forces of darkness. Jusqua tells the others he used to think of himself as smarter and more pragmatic than them, but that it was really an excuse for his laziness and fear of failure.

As the flood of darkness sent the group back in time it allows the party to prevent Chaos's servants from corrupting or usurping the rulers of the world's cities, including Rolan. In Urbeth, they find Thauzand's daughter had been stricken by Beelzebub's plague and Jusqua wants to help in repayment for the kindness Thauzand showed him in the original timeline. Each ruler grants them a weapon in thanks for saving them. After helping everywhere else, the party returns to Horne where they discover Satan had replaced King Horne and made the contract with Louhi, the Witch of the North, in exchange for the black magic Desolator. With Rolan's help they restore the real king and prevent the petrification curse from being laid on the town.

The defeat of all Chaos's servants opens the Star Chamber, which threatens to flood the world with darkness. Jusqua and the others enter it with the weapons and defeat Chaos. After speaking with the King of Horne, Jusqua leaves with the group, knowing they are Heroes of Light destined to help their world.

Jusqua's base stats grow equally, which can be beneficial for a variety of crowns. He can fill in a role left unfilled by the other three party members. It is recommended to equip Jusqua with low and mid tier Black and White Magic. He is also good with support crowns, such as Salve-Maker. The stat gap between characters isn't grand, so he can competently act on any crown without noticeable setbacks due to base stats.

Jusqua appeared as a character in Bravely Default Praying Brage.[1]