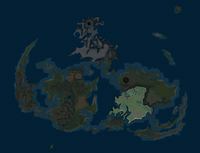 The Junon Area is a region of the world map in Final Fantasy VII located on the eastern continent. It is the largest of its three regions, separated from the other two regions by mountains. The Mythril Mine links it to the Grasslands Area on its eastern side. The in-game world map has no link between it and the Midgar Area, although it is possible the mountains of the north are traversable, as a scene in the game shows characters approaching Midgar from mountains to the north.

Junon connects with the eastern continent via boats, such as the Cargo Ship, that travel between Junon and Costa del Sol. After crossing the sea the player cannot return until they obtain the buggy, whereupon they can bribe the Cargo Ship workers to smuggle them and their vehicle across the ocean.

The mainland of Junon is divided into two areas by a stream, which cannot be crossed on foot, but the buggy can cross on its shallowest point, and the Tiny Bronco can sail up it. Upon Meteorfall, a crater appears in Junon that cuts off the stream from the ocean and removes the shallows, though the area is still accessible with the Highwind and skilled chocobos. North of the stream, in a mountain adjacent to the northern border mountain is a cave: the Old Man's House. The player needs to visit here with the buggy to get Mythril for Aeris's ultimate Limit.

South of the stream is the main portion of the Junon Area. The north of this section contains forests where the Mystery Ninja may appear. This is the earliest point she may be encountered (12.5% chance) to recruit Yuffie. Many of these forests are destroyed in the forming of the aforementioned crater. In the center of the southern section is Fort Condor, which is surrounded by wasteland due to its mako reactor. After the Fort Condor Huge Materia mission, the Condor atop the fort disappears. Tucked away on the coast in the northwest is the region's namesake, Junon (next to the minor settlement Under Junon). Junon's cannon disappears after the Underwater Reactor Huge Materia mission. By Junon is a bay for submarines.

Chocobos can be encountered on tracks on the easternmost peninsula with the Chocobo Lure equipped.

After Diamond Weapon is defeated and North Crater's barrier is destroyed, Ultimate Weapon takes residence above the Junon crater.

The Zemzelett has the White Wind enemy skill, although it cannot be obtained without the Manip. ability, which the player cannot have on their first visit here, although they can as soon as they get the buggy.