Junon is a field map in Final Fantasy VII located in the Junon Area of the eastern continent. It is not accessed directly from the world map, rather, it is situated above Under Junon and accessed by using the elevator there. It is first visited during "The Stowaway Strategy", when a party led by Cloud tries to board the Cargo Ship to cross the ocean. It is revisited during "In a World Approaching Its End" by Tifa's party as they flee Junon to escape execution, and again during "Clash in the Deep Sea" when Cloud's party makes its way to the Junon Underwater Reactor.

Junon has numerous shops. After the Highwind is obtained, Junon sells a variety of useful weapons.

Junon is located on the western coast of the eastern continent.

Junon is located to the west on the eastern continent, the Junon Area. It is located on the coast and there is a submarine bay next to it. It can be accessed by boarding the cargo ship from Costa del Sol, whereupon the player arrives at the dock at the end of town, or via the elevator from Under Junon.

The elevator is accessed in the back of Under Junon town. When the player first arrives, access to Junon is blocked due to Rufus Shinra's welcoming ceremony, but afterward, the player can bribe the guard for 10 gil to get through.

The Airport contains a simple elevator up to the Airport Path, and is located adjacent to the Locker Room. The screen itself contains little of note.

The Locker Room comprises a few small rooms, contains a save point, and connects the Airport and the Road. In the room in the back, during "The Stowaway Strategy", Cloud is taught how to perform the parade and posing minigames.

Several open doors alongside the Road lead directly into shops, while the alleyway leads into the Weapon Store and Bar. At the end of the road is the Junon Path, and eventually Lower Junon. During "The Stowaway Strategy", the Junon parade takes place here.

Located downstairs from the Weapon Store, the Bar is frequented by a number of individuals. During "The Stowaway Strategy", it is attended by Rude, who is found sitting with four other men (they may be gambling); later, the other customers profess to missing him.

Located left from from the Weapon Store, the Upper Junon Item Shop is owned by an older man who says he used to be in SOLDIER. If visited after "In a World Approaching Its End" onwards, he begins to dress like a Sephiroth-clone, but displays no other markers of their fanatic behavior.

Located left from the Item Shop. Several items can be found dotted across its three floors, along with non-player characters to interact with.

The first floor of the Barracks contains a basic layout with a kitchen and a bedroom. There are two non-player characters, but no notable items. In the corner is a soldier who stands in front of the basement entrance to the Respectable Inn.

A metal floor with a common area and a bedroom. Across the floors are a Mind Source and a 1/35 soldier in the common area, and a Luck Source in the bedroom.

The top floor contains a bedroom and a study room. Across the floors are a Power Source in the left room and a Guard Source on the right in the hallway.

The basement floor of the Barracks, reached through an entrance guarded by a soldier, houses the Respectable Inn, or the Beginner's Hall (Intermediate). This is a darker room surrounded by machinery, with several ghosts from the previous Sector 7 Slums, and a few soldiers. The area has an Enemy Skill Materia the player can pick up.

Similar to that in Upper Junon, the Road contains several open doors alongside it that lead to shops.

Located in the first door on the Road from the Branch Entrance, the Shinra Member's Bar contains a few non-player characters, but no notable items. In "The Stowaway Strategy", Reno, Tseng, and Elena are found here; after "In a World Approaching Its End", the bartender talks about plans to close the shop.

There are hints that this field map was the original field map for Seventh Heaven (see below).

Located to the left from the Shinra Member's Bar, the Junon Inn contains a save point, and a staircase leading up to the Materia Store and Accessory Shop.

Located upstairs from the Item Store and Junon Inn, the Lower Junon Accessory Shop is ran by an old man who used to be in SOLDIER.

Located to the left of the Junon Inn.

The first floor is an armory, with one non-player characters. A Speed Source is found in the closet in the top-left.

Located at the very end, during "The Stowaway Strategy", the Dock is where the send-off performance for Rufus occurs. Later, a sailor can be spoken to here.

Not to be confused with the underwater reactor's submarine dock.

During "The Stowaway Strategy", a party led by Cloud attempts to sneak on board the Cargo Ship. Cloud must disguise himself as a Shinra MP soldier and partake in a parade minigame. Following this is another related minigame, in which Cloud and his soldiers must perform for Rufus, where the item rewards are more substantial (either the Silver Glasses accessory, the HP Plus Materia, or the Force Stealer).

Later, during "In a World Approaching Its End", Tifa and the rest of Cloud's party are set to be executed. The quest begins with a series of events where the player is required to control certain party members through combat segments. After this, the player must partake in two minigames with Tifa, first to free her from the gas chamber, and then to win a slap fight against Scarlet.

Freeing Tifa from the gas chamber[]

To free Tifa from the gas chamber after Shinra decides to execute her and Barret as scapegoats for the peril the Planet is in, the player must perform specific actions to retrieve the key from the floor and use it to free her from the seat she is bound in. The

or [CANCEL] button controls her legs, the

or [SWITCH] button controls her right arm, the

or [OK] control her left arm while the

or [MENU] control her head.

After escaping the gas chamber Tifa runs to the end of the Mako Cannon where Scarlet catches up with her and the two begin slapping one another. Whoever receives five slaps first loses. The player must time their slaps by using

Normally, whether the player wins or loses, Scarlet will say "Take her away" afterwards. An error in the programming prevents the player from seeing the Tifa-win-version of Scarlet's line, as the requirement for Scarlet's unused line is that she be slapped six times and this is impossible because the minigame ends at five slaps. If Tifa wins the fight Scarlet was meant to say "God! I can't stand it!".[1]

The shops in Junon update their merchandise after the party gets the Highwind, except for the Upper Junon Materia Store. The Materia store is coded like the other shops, but instead of calling for the second version of the shop after the plot advancement, it calls for the original one. The unused shop is unique, as it would have sold Magic Plus Materia, a Materia not sold by any accessible store in the game. It also contains Revive, MP Plus, Barrier, and Exit.

In the English localization the three stores in each half of Junon have the same name, however, it appears the original intention was to give each shop a unique name. The Item Store in Lower Junon is actually "Accessory Store" in Japanese, which is why "Accessory Shop" is the name of the menus even though during Meteorfall the shop instead sells armor and weapons. The Materia Store in Lower Junon is roughly called the "General Store" in Japanese, which is why during Meteorfall its wares change from Materia to weapons. In the Japanese version both Weapon Stores have the same name, but they are distinguished in the game files with the Upper Junon store using the initial "w" and the Lower Junon store using the initial "wa". The Lower Junon store has a sign for "Weapon" and "Accessory", so this store was likely intended to be called the "Weapon & Accessory Store", however, in the final game it sells no accessories.

During Meteorfall, the Upper Junon Item Store starts to sell weapons, however, the shop window's name is still "Item Shop". This is likely intentional as the weapons are joke equipment, most of which aren't traditionally used as weapons.

Another curiosity of the Junon shops is that most of the wares from the Upper Junon Weapon Store pre-Meteorfall are instead sold at the Lower Junon Materia Store during Meteorfall. The weapons that were not sold in the previous store are the starting weapons for the four characters obtained after the first visit to Junon.

After Highwind the shop sells the party's joke weapons; all of them can be acquired by a different way as well, and none have Materia slots; the weapons are rather intended to look amusing when equipped in battle, although Red XIII's weapons don't actually render.

Outside Press Room (Disc 2 - During Escape)[]

Barret's Escape on Main Concourse, and Airport (Disc 2 - During Escape)[]

Outside Press Room (Disc 2 - After Escape)[]

During the first visit to Junon, the music that plays is "Rufus's Welcoming Ceremony" (ルーファウス歓迎式典, Rūfausu Kangei Shikiten?), a fanfare played for Rufus's inauguration. "Turks' Theme" (タークスのテーマ, Tākusu no Tēma?) plays during the return to Junon, specifically before Sapphire Weapon attacks. After the Weapon attack the music changes to "Hurry Up!" (もっと急げ！, Motto Isoge!?).

It appears the early designs for Seventh Heaven were later used for the Shinra Member's Bar in Junon. The "Making Of" bonus disc included with Final Fantasy VII International includes a pre-release shot of the Junon pub where Cloud uses lines he says in Seventh Heaven in the final game. The Junon pub also appeared in a GameFan article written nine months before the release of Final Fantasy VII, which suggests it was originally planned to be a more important location than it ended up being in the final game.[citation needed] Comparing the layout of the Junon pub to the Beginner's Hall in Junon suggests that the underground level may have been the original Avalanche hideout, situated below the Seventh Heaven bar.

A man who keeps a shop in the top floor of a building, who on a visit during "The Stowaway Strategy", mentions he used to be in SOLDIER. When visited later after "In a World Approaching Its End", he has dressed up as a black cape and mentions he suddenly got an urge to start dressing like that. This is an allusion to how the treatment the SOLDIER members receive is the same as the one of making of Sephiroth-clones.

In the endgame, the player can find a lone Shinra soldier in Junon who mentions the "Great Sephiroth Plan"[2] and how everyone else has followed the order but him, because he wants to stay behind to see the world end. Earlier in the game, people in Kalm talk that Shinra is going to dispatch the entire Shinra army to the North Crater to fight Sephiroth once the barrier has been destroyed.[2] There are no Shinra troops to be found in the North Crater, however, so what became of the "Great Sephiroth Plan" is unknown. 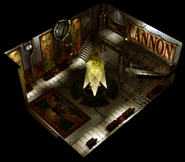 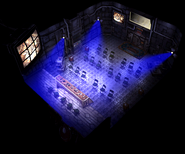 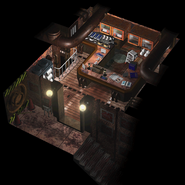 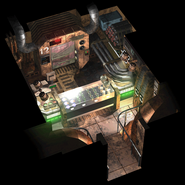 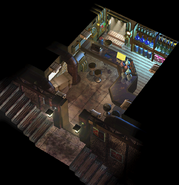 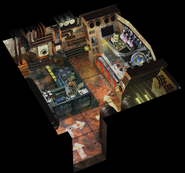 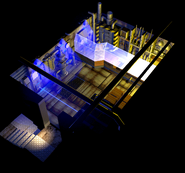 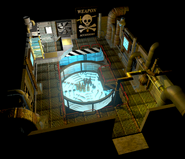