Junction system (ジャンクションシステム, Jankushon Shisutemu?) is a character development system designed by Hiroyuki Ito for Final Fantasy VIII. By collecting magic from items, draw points and enemies, the player can junction their magic stocks to their attributes via Guardian Forces to grow stronger. Using the Junction system is the superior method of growth to leveling up or weapon-upgrading.

Lore-wise, junctioning allows the user to replicate the powers of a sorceress via the storage and control of magical powers and Guardian Forces. The system can store 32 different forms of Para-Magic with a stock of up to 100 charges of each spell. Users siphon magic (via a process known as drawing) from living beings, the environment around them, or even machinery, and store it for casting or junctioning. Through junctioning, Para-Magic can grant its users near-superhuman abilities, such as increased speed and strength, and being able to use magic.

The game's original Japanese version has a Junction glitch that lets the player junction the same spell to more than one stat. The glitch was fixed in the western localizations.

The Junction system is not based on the traditional specialization of weapons and armor in a typical Final Fantasy game, and because in general enemies' scale to the player party's level, simple leveling up does not help gain an advantage. Without utilizing the Junction system, characters cannot use abilities other than Attack during battle.

The player can customize their party by junctioning Guardian Forces (GF) to them and grant them stat upgrades, ability commands that can be used in battle, and elemental and status ailment attack/resistances. What precisely can be upgraded depends on the GFs the player has junctioned, and what the GFs have learned.

The player can upgrade stats and/or attack/resistances by attaching magic to the attributes provided a GF junctioned to the character has learned the corresponding Junction ability. The more magic junctioned, the better the effect. Different types of magic have different effects when junctioned. To upgrade basic stats, for example HP and Strength (Str), any magic can be used, but some magic will have a greater effect on certain stats; for example, junctioning the Haste spell to the character's Speed stat gives a bigger boost than junctioning Scan or Fire.

Squall and Seifer use gunblades that have native perfect hit rate and their critical hits are manually triggered. Thus, the Hit-J and Luck-J Junction abilities are pointless on them.

Upgrading elemental attacks/resistances (Elem-Atk/Elem-Def) (if the GF has learned the abilities) generally requires elemental magic. Junctioning Fire to an Elem-Def stat will increase a character's resistance to fire-elemental attacks; the more Fire magic junctioned, the better the resistance. Some other magic will provide multiple resistances, notably Ultima that provides resistance for all elements. Junctioning elemental magic to the Elem-Atk stat will cause the character's normal attack to posses an elemental property, giving advantage against some enemies.

Similarly, upgrading status ailment attacks/resistances (ST-Atk/ST-Def) (if the GF has learned the abilities) generally requires magic that causes or cures status ailments. Junctioning Death to ST-Def will make a character resistant to instant death attacks, while junctioning Death to ST-Atk will allow a character to cause instant death when executing a normal attack.

Players can choose to auto assign magic to stats, Elem-Atk/Def and ST-Atk/Def by using the Auto command in the junctioning menu. The player can auto assign magic giving priority to Strength, Magic or Defense; despite the name of the last one, choosing Defense in fact prioritizes HP.

To use command abilities in battle (and in the case of Draw, in the field), characters require them to be junctioned. The abilities available depend on the GFs junctioned, but do not require magic. In the same way, the Character/Party support abilities also require junctioning, but do not require magic. A character starts out with two support ability slots, but can gain three or four. For example, if a GF has learned the ability HP+20%, it must be junctioned to one of the slots to be activated.

Eden's Promise: Eternity It uses them to draw upon the Warrior of Light's memories of Titan and Shiva, granting it their abilities. 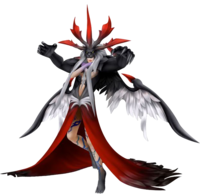 Ultimecia's EX Mode is to junction Griever. In her EX Mode, in addition to the standard Regen status and increased probability for critical hits, Ultimecia gains the special attack Time Crush, which stuns opponents for several seconds upon a successful execution.

Junction is a game mechanic possessed by Final Fantasy VIII character cards. When a Forward uses Junction, they pay the Summon cost for an Eidolon card in their hand (as well as the cost to use the Forward's Junction ability, if applicable) and remove that Eidolon from the game. As long as that card is removed from the game, the Forward is now considered "Junctioned" and gains various abilities that differ for each card.

In Dead Fantasy II, Rinoa Heartilly junctions Holy and Tornado from her fan-made Blaster Edge, Silenced Tear, and uses both in her battle against the Dead or Alive girls.