The Jump glitch occurs with the attack ability Jump.

The SNES versions include a bug where a number of spells and scripted events behave oddly when Kain is the only character alive and uses Jump. Unintended consequences include monsters not changing form (like Leviathan), or monsters hitting themselves (Demon Wall), or even the game freezing (Deathmask's Haste spell). The bug does not affect the Advance release. 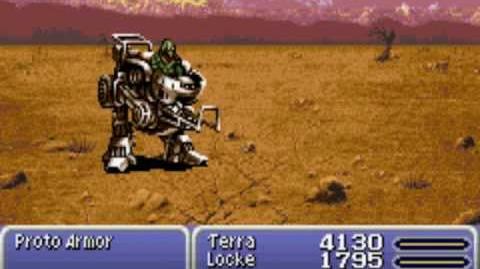 There are several glitches involving the Jump command. The first is that Jump does not reload weapon data. For instance, if Mug is used from the Thief's Knife during the Jump command, all jumps afterward will have Mug, or if Organyx breaks while jumping, all jumps during the combo afterward will act like Organyx is still equipped. The second glitch involves using two weapons with the Jump command. After the player initializes the Jump command, Jump will pick one of the two weapons to use, though the graphic of the weapon in the one equipped on the right hand of that character will be used all the time. And if either of these weapons is a spear, regardless of which weapon the command chooses, the damage will always be doubled. There is a bugfix patch that players can use to fix these particular Jump glitches on the SNES version (although it does not fix the other Jump glitches listed below).

The next glitch involves having all characters in the air via Quetzalli or the Jump command when an enemy uses the Launcher attack. Launcher will cancel out the Jump attacks, making both the player's characters and the enemy unable to do anything until the enemy uses Launcher again. The player's party will be invisible and not manually targetable during this time. Another similar glitch involves having an enemy that can use Jump, such as Umaro or Leap Frog, and using the Super Ball, in which the enemy is stuck in this state and the player must either use another Super Ball or escape the battle to make the enemy reappear. There is another bugfix patch that players can use to fix this Jump glitch on the SNES version.

Another glitch occurs when a character with the Dragon Horn is equipped with the Zantetsuken. If a character kills an enemy with the Zantetsuken's Death ability before the jump attack ends, the enemy and jumper may become invisible, however, the enemy that was "killed" will remain alive. This is because the enemy will gain and the character will retain the Hidden status. The Hidden status is different from the Invisible status, in which the character's outline is visible; here, their sprite is completely absent. The character and enemy sprites will reappear after taking another action.

The Super Nintendo version has a bug in detecting the attacking hand for the Organyx breakage with the Jump command. If a player puts Organyx in a character's right hand, equipping him/her with the Dragoon Boots but no Dragon Horn, the sword will never break because the Organyx was coded wrongly, and checks the left hand which should hold something else with this setup.

Another glitch available in the Advance as well as the PlayStation edition, is making a character almost invincible. To do this, one of the characters needs to be hit with the Lore spell Doom and be in the air when the timer gets to zero. This will cause the character to finish the attack with 0 HP and still be alive. In the Advance version, attacks on that character will cause 0 damage, but if the character gets hit with a healing spell to make their HP go above 0, the effects of the glitch are nullified. On the PlayStation, however, any additional damage will immediately KO the target. It remains untested if healing items or spells will have similar effects.

A variant to the previous glitch. If the Doom timer runs out on an undead monster while it's in the air after using Jump, the monster will die the moment it hits the ground even though Doom's Death spell should have healed it. Since the only way the player can see this bug is through the use of Confuse and Quetzalli as no undead can use Jump under normal circumstances. For an example of this, cast Doom on a Vampire Thorn and before the timer run out, cast Confuse on the one who will summon Quetzalli so that it makes the enemy party jump instead of the party. When the timer runs out before Vampire Thorn can land. Vampire Thorn's graphic will appear to die and reappear, then subsequently land from the Jump attack and die after landing. 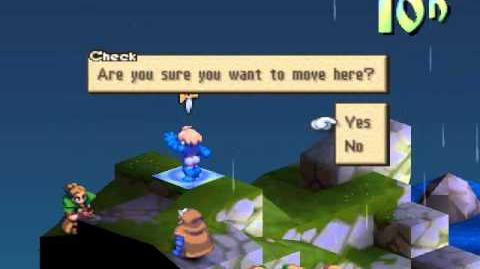 A hazardous bug triggers by having a human character perform the Jump attack when riding a chocobo from where the water depth is 2-level (such water depth prevents combatant from performing any action without the movement abilities Swim or Waterwalking). After the one jumps has landed on the target and returned to the chocobo, the game will be soft-frozen. This bug can be avoided by equipping the aforementioned movement abilities on the rider.

Jump will also cause a glitch if the attacking unit jumps on a corpse while Invisible. For reasons unknown, the game will reward EXP and JP to the attacker and remove the Invisible status as normal, but completely forget that the target is dead in the first place.