Jump (ジャンプ, Janpu?), also called Jumping and Auto-jump, is a recurring field action in the Final Fantasy series. Usually, jump is used to overcome obstacles such as holes, going up and/or down cliffs, reach higher areas, and cross gaps.

In the Ship Graveyard, the player can move from one sunken ship to another by jumping on the reefs. It is triggered automatically when the player approaches the ledge.

The player can jump by pressing

button at the spots where the game was designed for the character to jump.

Vincent can jump by using the

button. As opposed to the Japanese release, Vincent can double jump. After jumping in mid-air, Vincent can do another jump to reach higher places or enemies.

Referred to as Jumping within the game. Press and hold the

button while approaching a chasm to leap across. If the player fails to press the

button, Yuna will lose her balance. In certain places, not pressing the

button will allow Yuna to jump down the ledge below. Unlike other titles that include the ability to jump, random encounters may be triggered mid-jump.

button at the glowing blue rings. To do so, simply approach the obstruction and attempt to continue moving in the direction they wish to proceed. If it is possible to jump over the hurdle, they will do so automatically. If hacked into the party, neither Gadot or Lebreau have an Auto-jump animation.

Jumping can be used by pressing the

button to cross small steps or over objects blocking the player's path. The player can also jump over larger obstacles in certain locations by pressing the

button while standing on the glowing blue rings and the character will automatically leap over the obstacle. After the player obtains the Fragment Skill Anti-grav Jump and enables it within the menu, the player will be allowed to hover in the air for a limited time after jumping.

Jump can be used by pressing

it enables Lightning or the Angel of Valhalla to jump over small gaps or obstacles blocking their path. Jump can also be used while dashing to cross greater gaps.

Since version 2.0 (A Realm Reborn), the player can jump freely by pressing Spacebar or the

The player can jump freely by pressing the

button. This can be used to get past small obstacles, traverse over gaps, avoid enemy attacks, and begin aerial combos.

Referred to Jumping within the game's manual. To reach some areas in the game, the player will need to press the

button to jump over obstacles and people.

button is used to jump over obstacles such as people and trapholes found inside a city, tower, cave, etc. If the player jumps when underneath a bridge or platform, the character will humorously shout "Ouch!!". 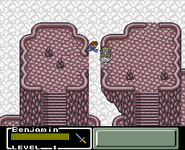 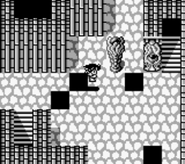