Guest character
Julius is a temporary party member and the main antagonist of Final Fantasy Adventure.

His father was the emperor of Vandole Empire, which was on the verge of world domination before being defeated by the Gemma Knights and Fuji's Mother. When Vandole Empire's side was losing by the combined forces of the Gemma Knights and the Mana Family, Julius' father left the empire's last hope in the cave of the waterfalls, his baby son inside it. Sometime later, Julius was found by Dark Lord, ruler of the Glaive Empire, and was taken in as his own.

Many years later, Dark Lord began his own quest for world domination, with Julius as his right-hand man. Dark Lord sends Julius on a mission to retrieve a pendant and the girl that owns it. With both in their possession, they could reverse the flow of the waterfall that leads to the top of Mount Illusia, where no airship can reach. At the top of the mountain lies the Tree of Mana, and anyone who touches it will gain the ultimate power of Mana. However, neither Julius nor Dark Lord know the consequences of this.

After finding Fuji wearing the pendant, he disguises himself and pretends to befriend her guardian, Sumo, in the Cave of Marsh and together they defeat the Hydra and recover the Mirror. He is then seen in Wendel, and overhearing the discussion with Cibba, obtains proof that the girl is indeed the one Dark Lord was looking for. Saying that Glaive is attacking the city, he pretends to take the girl to safety, but then unveiled his true identity. He was in the process of escorting her back to Glaive Castle on his airship when Sumo interfered in an attempt to rescue her. Julius knocked him off the airship with a spell, but not before Sumo got a hold of the pendant.

One thing led to another, and Garuda, Dark Lord's pet, reclaims the pendant and delivers it to Glaive Castle. Sumo followed it to there, kills Dark Lord and rescues Fuji. However, Julius casts a mind-control spell on her and forces her to use the pendant to reverse the waterfall. Once he reached the Tree of Mana, he absorbs its power.

After obtaining Excalibur in Mana Shrine, Sumo arrives to stop Julius. But Julius had already absorbed all of the tree's power, and uses it to split into three clones. Once those are defeated, he transforms into an insect-like demon that shoots lightning. After that, too, is defeated, Julius transforms into a large demonoid head with two floating hands, each of which can cast Nuke every five seconds. However, this form is also defeated, resulting in the death of Julius and the destruction of the Tree of Mana.

As the Mysterious Man, he tags along with Sumo. Julius will throw fireballs at enemies while attacking. He will also, when asked, teach Sumo that some walls can be broken with Star or Mattock.

During the first of the Final battle's three phases, Julius makes two clones of himself, and the three of them walk around the area in random directions, shooting fireballs at Sumo. All three Julius incarnations must be killed in order to proceed. In his second form, he flies back and forth across the top half of the screen in a W-pattern, occasionally swooping down on the player if they're in range. He'll also fire bolts of lightning that ricochet diagonally. In his third phase, he constantly teleports to random locations, and when he appears, he fires two Nuke blasts that home in on the player.

Julius appears with and without his this disguise in the version available via Final Fantasy Portal App.

Julius.
Add a photo to this gallery

Demon Form Julius.
Add a photo to this gallery 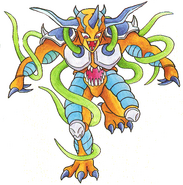 Artwork from Sword of Mana.
Add a photo to this gallery

[view · edit · purge]Julius is a male given name from an ancient Roman family name possibly derived from Greek ιουλος (ioulos) "downy-bearded." Alternatively, it could be related to the name of the Roman god Jupiter. This was a prominent patrician family of Rome, who claimed descent from the mythological Julus, son of Aeneas. Its most notable member was Gaius Julius Caesar. Although the name was borne by several early saints, including a pope, it was rare during the Middle Ages. It was revived in Italy and France during the Renaissance, and was subsequently imported to England.