Illusion is the only true reality.

The Judge of Wings is a major antagonist in Final Fantasy XII: Revenant Wings. She aims to invade Ivalice from the floating continent of Lemurés and start a war between the aegyl and humes. Sky pirates call her the Judge of Wings due to her resemblance to the Archadian Judges.

As the Judge of Wings, she wears a full suit of ornate silver armor with a pair of large wings on her back.

As Mydia, she is a light-skinned viera with short rabbit-like ears, long blonde hair and light brown eyes. She wears a high-collared pink corset top with a thin, pink cloth that hangs down in the front reaching her mid-thighs and white bikini-like bottoms. She has pink wristlets and armbands on her upper arms. She wears black stiletto heels with thigh-high black and pink tights.

The Judge of Wings is filled with vengeance that drives her every action, causing her to desire the total destruction of Ivalice. Unbeknownst to her, she is being driven by Feolthanos's anima; her personality before being influenced by Feolthanos is kindhearted and compassionate.

The Judge of Wings is a feol viera by the name of "Mydia" (ミディア, Midia?). Like all feol viera, she was born and raised in the Feol Warren, isolated from the rest of the world. Mydia was a recalcitrant young woman and would often argue with her mother about her people's cruel fate. One day, her mother gave her a tome explaining the feol viera would eventually reach the skies and be free. When Mydia came of age she left the volcano to explore Ivalice, ignoring her elders' wishes.

In Rabanastre she encountered the hume Velis. They befriended and romantic feelings developed between the two. Velis, being a soldier of Nalbina, was called away to the war. Promising to return, Mydia waited, but after several weeks of waiting she knew she'd never see him again.

Remembering the stories from her youth about the Eternal, a source of eternal life she thought could revive Velis, Mydia wandered Ivalice collecting clues about the islands of legend. She found the Cache of Glabados where she acquired a piece of auracite and the Galbana. Using the airship, she departed to Lemurés.

When she arrived Feolthanos detected her fresh anima and knew she would be easy to control: she was descended from his viera wife, held a piece of auracite—which contained part of his anima—and she was feeling a burning anger from losing Velis. Using his new puppet, Feolthanos embarked on his quest to get revenge on Ivalice. To ensure he had complete control, he robbed Mydia of her anima by tricking her with a means to revive Velis, but only created a Yarhi in his image. Mydia gave up her will and became the Judge of Wings, a puppet to her master.

May destruction rain upon this land. The power of the auraliths will soon be mine. And Ivalice awaits...

Vaan's party first encounters the Judge on Tormelados, Isle of the Megalith. She is at the auralith's Cradle in the Fane of Tehp Qul, draining the auralith of its power. The Judge uses her powers to distort the feelings within the party's minds, rendering most of them unconscious and shows them a flashback of her counter with Balthier in the same Fane.

Balthier had attempted to stop the Judge, but she had already dispatched Fran. Balthier destroyed his own auracite and told the Judge that chasing eternal life was a foolish fantasy, then turned his gun on the Judge. The judicier summoned Shiva, who knocked Balthier out with a Diamond Dust spell.

Returning back to the present, the Judge fights the party before vanishing and leaving her dirty work to Shiva. When the Empress of Ice is defeated, the Judge returns and uses a pair of machines to destroy the auralith, absorbing its powers into her shard of auracite before disappearing again.

The party searches for the Judge and finds her in the Yapih Caverns, standing over a Summoning Gate before a crystal of fiery auracite. After using Belias as a distraction, the Judge summons Bahamut, who shatters the Skysea into several pieces.

What end could be more fitting for one who is but an illusion?

The Judge, about Velis

The party is stranded on a deserted island, Tswarra, where they encounter Velis who explains he is looking for a feol viera called Mydia. When the Judge attacks the party later on at Tomaj's Camp, Velis's reaction to her makes the party realize she must be Mydia.

The Judge shows the party another flashback. She was at the Yapih Caverns to summon Velis back from the dead using Feolthanos's power, but the form she brought back was unresponsive and Velis was spirited away, landing on Tswarra. Back at Tomaj's Camp, the Judge captures Velis and transforms him into the Yarhi Odin. She concludes the Velis she has resurrected is not the Velis she loved, and so leaves the island, and the party is forced to defeat and kill him.

On mainland Ivalice, the party encounters the Judge in the Paramina Rift. She tries to crush them and Basch challenges her. The Judge teleports away and the party journeys around Ivalice looking for clues Feolthanos had left behind to discover where Mydia would strike next. It leads them to the Roda Volcano, where they find the Feol Warren village.

I will not suffer to use others as Feolthanos used me. In death my people are free. They will not know the sorrows I have. 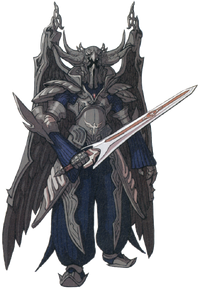 Vaan's party finds the home of the feol viera, but the Judge is already there, slaughtering the viera claiming it is the only way to end their suffering. The party tries to stop her, but she summons Chaos. When Chaos is defeated, the Judge fights the party herself, and throws her auracite into the lava, summoning an army of Wyvern, but the party still defeats her.

When they gather round the Judge's armor disappears, revealing the viera underneath. Mydia had been possessed by Feolthanos, who had used her to start his invasion of Ivalice. Her hatred of the people who shunned her people, the loss of her love, Velis, and the fact her auracite contained part of Feolthanos's anima made her easily possessed. She asks the party to defeat Feolthanos and free him from the magick granting him perpetual life. Mydia's spirit leaves her as she dies, and reveals Eternity's March, the pathway to the Keep of Forgotten Time.

The Judge of Wings is fought as a boss several times during the course of the game under both names.

Judge of Wings appears with her promotional render with an ice-elemental card.