The Judges are a recurring element in the Final Fantasy titles that exist in the Ivalice universe. Generally, Judges are the keepers of law in Ivalice, and have held this position since their initial appearance in Final Fantasy Tactics Advance.

The in-game moderators, Game Masters (or GM's), appeared in the form of Judges, and were capable of using exclusive magic and abilities.

Judges serve under the Ministry of Law in the Archadian Empire. The highest in rank are the Judge Magisters, who are often accompanied by subordinate Judges. The Judge Magisters are effectively the Empire's Supreme Court.

The Judge of Wings is aptly referred to as a Judge by the Sky Pirates due to her armor's appearance, being similar to that of Archadian Judges. However, she is not affiliated with Archadia.

A Judge appears in a concept art. He looks suspiciously like Gabranth, although he wields a lance rather than a sword.

The Judges' debut in the series, they serve to uphold the law set by the Ivalice Royal Family, headed by Queen Remedi and administered by Judgemaster Cid Randell. 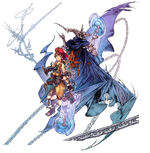 The Judges are given a different persona as well as a different role. They serve Adjudged Clans where they protect them from death as long as they uphold the laws set during engagements.

The Judge is a being who appears during the time of Tempus Finis. Located in Pandæmonium and it will give the "Final Judgement" to the people of Orience. 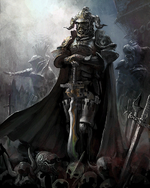 This section in Mobius Final Fantasy is empty or needs to be expanded. You can help the Final Fantasy Wiki by expanding it.
Ivalice
Final Fantasy Type-0 setting
Retrieved from "https://finalfantasy.fandom.com/wiki/Judge_(term)?oldid=3231804"
Community content is available under CC-BY-SA unless otherwise noted.