Jormungand is an enemy from Final Fantasy X. After the player captures one of every fiend from the Djose Highroad, Jormungand can be fought in the Monster Arena. It shares its model with the Anacondaur.
See also: Jormungand (enemy)

Jormungand has three attacks. Its normal attack is not too powerful, but Cold Stare deals damage and petrifies the target; if the damage would KO the target, they will immediately shatter. Space-Time Vorpal deals moderate damage to the whole party. If a party member is petrified, Jormungand will prioritize attacking them. Against aeons, Jormungand does not use Space-Time Vorpal.

Jormungand drops 3–4 slot equipment, 1–4 of them having abilities. It drops weapons with any of the status strikes and armor pieces with any of the status proofs, with Stonestrike and Stoneproof as fixed abilities. Its equipment drops provide a hidden 6% critical hit chance bonus instead of the usual 3% (this is relevant to weapons and armor pieces, but only to attacks that deal physical damage).

Magic does not have much effect on Jormungand. It is vulnerable to Slow, as well as all Breaks. While Jormungand is not immune to Armor Break, it will only work 10% of the time. A Frag Grenade or Auron's Banishing Blade Overdrive will work 100% of the time, and so are more effective to break its Break resistance. Using Hastega to give the party more turns is also useful. 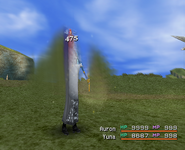 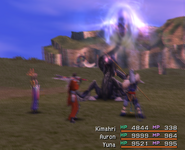