Pretty interesting... I have a feeling that we'll meet again.

Joe is an non-player character in Final Fantasy VII. A master chocobo jockey, Joe is introduced to Cloud when escaping Corel Prison, and Ester introduces him. Later, Joe randomly appears in chocobo races at the Gold Saucer when the player is racing.

In contrast to the other NPC jockeys, who appear indistinguishable from each other and ride randomly-colored chocobos, Joe wears a red coat, white pants and black hat. He is the only NPC jockey to ride a black chocobo, named Teioh, whose stats are always higher than the player chocobo's; even if the player is riding a gold chocobo with maxed-out stats, Teioh's stats will still be higher. His stamina can exceed 999, the maximum allowed for the player, and he can possess a top speed of over 150km. Teioh's speed will always be the player's speed +10%, and his stamina will always be the player's stamina +25%.

Teioh appears in the races when the player is racing with their own chocobo, appearing randomly in classes B, A and S; the higher the rank the more likely it is that Joe and Teioh will make an appearance. Once the race begins, Joe immediately teleports behind the player's chocobo. As Teioh is a black chocobo, Joe is unaffected by the slow-down areas, so gaining/maintaining a lead on him is difficult. Joe tends to sprint at the very end of the course, which is typically when he will overtake the player and any other chocobos and finish first.

With a black or gold chocobo the player can rob Joe's advantage. Even lower-ranked blue and green chocobos, or exceptionally well-bred normal chocobos, can beat him, although this is more difficult. Provided the player's chocobo has sufficient stamina, the player can maintain top speed throughout the race, while Joe will stay at normal cruising speed until he sprints.

Once the player has won 10 straight races at "S" rank, Ester mentions Cloud's the best jockey she's seen since Joe, and gives him a variety of prizes for his feat.

If the player has a chocobo with less than 120 max speed and less than 450 stamina and enters in a Rank S race, Teioh will be worse than the other computer players. If Joe finishes 3rd, 4th, or 5th, Teioh will hang his head down and Joe will get angry.

In Crisis Core -Final Fantasy VII-, Joe is briefly mentioned as a "Dashing man riding a black chocobo" by a NPC in Sector 8, who says the man saved her when she was attacked by monsters between Kalm and Midgar. 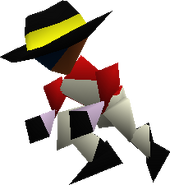 Joe and Teioh placing 3rd. Notice how sad Teioh is and how Joe has his fist raised.
Final Fantasy VII characters
Русский
Community content is available under CC-BY-SA unless otherwise noted.
Advertisement