Do be careful with those. For every task, there's a perfect tool.

Jihl, about Vanille and Sazh

Colonel Jihl Nabaat [dʒɪl nəbɑːt] is a major antagonist in Final Fantasy XIII. She is an officer in the Cocoon army as the Commander of PSICOM, the division that deals with the threat of Gran Pulse. She is an enemy of Lightning and her allies. Yaag Rosch is her right-hand man.

Nabaat returns in Final Fantasy XIII-2 through downloadable content. She is among the lost souls bound to battle in the Coliseum until the Day of Reckoning.

Jihl Nabaat is a talented PSICOM officer who graduated at the head of her class.

As the supervisor in charge of Dajh's testing, she grew close to his father, Sazh. However, her kindness was simply a ruse to gain access to the boy's l'Cie ability to sense Pulse entities.

She captures Sazh and Vanille in Nautilus, using them as bait in her scheme to draw the other Pulse l'Cie out of hiding. Jihl's plans backfire when her carefully laid ambush is unable to contain the l'Cie, and Barthandelus disposes of her as he would any other tool.

Jihl has blonde hair that reaches to her mid-thigh and olive green eyes. In Final Fantasy XIII-2, Nabaat's hair is more silvery. She wields a baton primarily used for fencing. Nabaat's glasses, which she normally wears unless in a fight, are thin-framed and have her initials in Cocoon script engraved in the arm. As confirmed in the Final Fantasy XIII Ultimania Omega, Jihl only wears the glasses to appear kind and trustworthy before crushing them on the Palamecia, a representation of her discarding her guise and fully assuming her true personality.[2]

Follow them, and observe. How often do l'Cie kill their own?

Nabaat has both political and personal motivations for opposing Lightning's group. She graduated first in her class and advanced in the military ranks to the position she holds as a lieutenant colonel. She is in charge of daily policy and takes strategic command of the PSICOM soldiers.

Nabaat is described as cruel and heartless, and she sees all l'Cie, regardless of whether they are from Pulse or Cocoon, as subhuman. She is a cold and calculating sadist who sees herself superior to ordinary humans, whom she views as flawed objects she can use in her agenda despite any loyalty they may possess towards her. As a result, Nabaat easily loses patience when things go wrong, projecting blame on her subordinates and giving desperate orders to regain control. Despite this, Nabaat is loyal to Primarch Galenth Dysley.

In Final Fantasy XIII-2, Nabaat is intrigued by human nature because at one moment, they fight each other to the death and the next, they form "shaky alliances", making themselves unsolvable contradictions.

Well, this is still all hypothetical. It seems Dajh has the power to sense those from Pulse. He probably will be able to tell where the l'Cie that attacked Euride are, as well as the fal'Cie who controls them.

Before the incident at Euride Gorge, Jihl Nabaat and her PSICOM troops were sent to monitor the facility, deemed as an official "state of emergency". Arriving on the grounds, she meets Sazh Katzroy and his six-year-old son, Dajh, who had been detained for inspection. She dispatches injured tourists to the plant's plaza before sealing off the area, taking Sazh and his son back to the offices in Eden to discuss Dajh's condition.

Learning the boy had been branded a Sanctum l'Cie by the fal'Cie Kujata who resides at Euride, Nabaat orders Dajh to be placed under PSICOM supervision in hopes of determining his Focus. She implores Sazh to allow his son to remain under their custody for further testing, and though Sazh is reluctant to trust Nabaat, he relents. Three days later, Nabaat tells Sazh that the incident at Euride was caused by Pulse l'Cie, and Kujata branded Dajh in response to the threat. The following day, under her supervision it is discovered Dajh has gained the ability to sense the presence of Pulse beings, but his Focus remains unknown. Nabaat speculates Dajh's task is to discover lowerworld invaders and destroy them.

When Dajh asks to go to the annual Bodhum fireworks festival, Nabaat authorizes the trip, sending him in the company of a troop of PSICOM soldiers and hoping this could lead them to discover his Focus. Two days later, on the way to Bodhum, Dajh shows interest in the local Bodhum Vestige. This catches Colonel Nabaat's attention, and she sends a team inside the ruins to investigate. During the fireworks festival, the team discovers a Pulse fal'Cie Anima within the ruins, implying Dajh had subconsciously reacted to its presence. The following day, Bodhum is put under lockdown.

Aboard an airship leaving Bodhum, Dajh's power confirms that the Pulse l'Cie Serah Farron is engulfed by the Vestige Ruins. Nabaat returns him to a monitoring facility in Eden intending to develop and use Dajh's powers to protect the people of Cocoon. Dajh is to be held under her supervision indefinitely. Nabaat authorizes Sazh's last request of traveling to Palumpolum to buy his son a toy or coloring book, offering him use of one of the military airships, unaware of Sazh's true intention of taking his son's Focus into his own hands.

Yes. That young lady's terrorist assault at Euride Gorge is the reason Dajh was made a l'Cie. Ironic, isn't it? The very girl you're protecting... is the one who stole your son.

Jihl to Sazh, about Vanille

Arriving in Nautilus, Nabaat's true colors are revealed when she captures the wandering Sazh and Vanille, two new Pulse l'Cie. She tells the two that having "undesirables" like them captured was Dajh's Focus all along. She plays with Sazh's emotions by showing him the enhanced security footage from Euride Gorge, revealing how his now-crystallized son became a l'Cie through the actions of Fang and Vanille. Nabaat tells her men to stand down while Vanille runs off, and lets Sazh pursue Vanille on the assumption that he will kill her and supply them with more data. However, Sazh cannot bring himself to kill Vanille or commit suicide.

Nabaat's group captures Sazh and Vanille, and she toys with Sazh's emotions by telling him that the Sanctum will build a memorial in Dajh's honor within Eden, putting his crystal on display, as the "hero that saved Cocoon". After Sazh objects, she asks if he would want Dajh to be remembered as the son of a hated Pulse l'Cie or as a symbol of sacrifice. Rendering Sazh unconscious with her baton, Nabaat oversees his and Vanille's transport to the Palamecia for public execution in Eden with Primarch Galenth Dysley overseeing the matter.

When Lightning's group breaks into the Palamecia with the help of Cid Raines and the Cavalry and reunites with Vanille and Sazh, Nabaat becomes vexed with how she is losing control of the situation and smashes her glasses into the floor. Once the l'Cie arrive, Nabaat confronts them so the Primarch can escape. Dysley, deciding to reveal his true nature, deems Nabaat to have outlived her purpose and fatally strikes her down with his magic, along with the other Palamecia crew members, so he can talk to the l'Cie personally.

As congresspeople hold an assembly in Palumpolum's concert hall, they proclaim that despite being dead, Nabaat and Rosch would be stripped of their civil rights for "bringing unprecedented calamity upon Cocoon."

What do you suppose I am? A ghost made flesh? A servant of chaos? I am your waking nightmare!

With a quartet of PSICOM Wardens praising her, Nabaat appears before a confused Snow. She joins the other gathered combatants to engage each other in the Coliseum. Encountering Serah and Noel, Nabaat explains her ideals while questioning if they are strong enough to win her services in the Paradigm Pack.

When recruited, Nabaat joins the list of characters who say "FINAL FANTASY XIII-2: The Story So Far..." after the player loads a save file.

Nabaat majors in the Saboteur role, able to summon PSICOM soldiers and militant units like Azure Behemoth and Nightblade Puma to her side and use the Sanctum's Antimatter Manipulation Principle-technology. Nabaat's Full ATB skill is Sadistic Surge, an attack comprised of a series of jabs, after which she launches her target into the air and consumes it in an explosion of purple energy. As part of a Paradigm Pack, Nabaat acts as a Saboteur with Sadistic Surge as her Feral Link.

Nabaat has appeared in the following games throughout the Final Fantasy series:

The Final Fantasy XIII Ultimania Omega lists the specific effects of the various color codes Nabaat uses on board the Palamecia to direct PSICOM in capturing the l'Cie running amok on the ship. She had prepared several strategies and the code names announced in on board broadcasts are the names of that operation.[3] 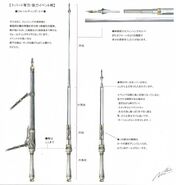 Paula Tiso has stated that voicing Nabaat was enjoyable despite the character not having much time on-screen. Tiso prefers more villainous characters, as they are fun and, for an actress, Jihl Nabaat was someone she could sink into in regards to whether the character is a subtle type of underplayed evil or greatly diabolical. Tiso admitted that she does a great evil laugh, as evidenced when the player executes Nabaat's Feral Link in Final Fantasy XIII-2.[4]

Jihl watches Vanille and Sazh be escorted onto an airship in Nautilus.

Another shot of Jihl in Nautilus.

A Jihl sprite from the Japanese Final Fantasy XIII website.

A close-up of Jihl in the Coliseum.