World of Balance:
World of Ruin:
Jidoor is the capital of a country with the same name in Final Fantasy VI.[1] It is the westernmost city on the map, and lies north of the Opera House. The town has an auction house, and an art gallery owned by Owzer, the wealthiest man in the world. In the auction house the party can bid on randomly appearing items and win rare espers and relics.

The party first passes through Jidoor in the search for Terra, but the city acts as little more than a resting point to buy new items on the way to Zozo. After finding Terra in Zozo, the party returns to Jidoor to look for a way to reach Vector on the Southern Continent. They find the Impresario in Owzer's Mansion, who tells them about Setzer, the owner of the world's only airship: the Blackjack.

Setzer plans to kidnap the opera singer Maria at the opera "Maria and Draco", and Locke is inspired to have Celes impersonate Maria to help them sneak aboard Setzer's airship and recruit him to ferry them to Vector.

After the end of the world, Owzer bought a strange stone at the auction house. While looking at it one night, he had a vision of Lakshmi and felt compelled to have a painting of her. After auditioning several artists who weren't good enough, he heard of Relm's talent and called her to Jidoor to paint for him. Her painting was too large to display on the main floor, so Owzer placed it in the mansion's basement.

However, a demon, Chadarnook, was enticed to the mansion by the stone Owzer had, which was actually the magicite of the esper Lakshmi. Chadarnook possessed the painting of Lakshmi while Relm was working on it, and because of the value he placed on the painting, more than his own life, Owzer would not let her harm the painting to excorcise the demon. The party comes upon the mansion and is able to destroy Chadarnook without hurting the painting, and Owzer tells them to take the troublesome Lakshmi magicite with them. Relm also goes with them, promising to return to finish the painting later.

When the party prepares to take Gau to meet his father, they come to Jidoor to teach him proper table manners dining at the inn and get a set of proper, fine clothes from the item shop.

The northern part of Jidoor is for the rich and the southern part for the middle class; the lower-class and poor left town to form their own town, Zozo. Thus the lower part of town has the shops, and the northern part has the auction house and Owzer's mansion. The eastern side of Jidoor is dominated by a balcony overlooking the town that expands into the town's second level further north, and north beyond that rises to a third elevation for the foundations of Owzer's mansion.

In most releases of Final Fantasy VI, Jidoor retains the lush green and flowering environments of the World of Balance after the cataclysm, but in the Pixel Remaster port the town has the same dying grass and flowers as most other locations in the World of Ruin.

For items available for purchase at auction, see Auction House.

After being to Zozo and finding out Terra's status, when the party returns to Zozo the Impresario will be at Owzer's mansion, and he mistakes Celes for the opera star Maria. The Impressario runs off, dropping a letter behind him. The letter is from "the Wandering Gambler", Setzer, who warns that he intends to kidnap Maria and make her his wife. Setzer owns the Blackjack, the world's only airship, so the party heads to the Opera House to make plans with the Impressario to set a trap for Setzer.

In the World of Ruin, Owzer's mansion is found in darkness and attempting to climb the stairs causes a force to warn the party away and push them back. The first time this occurs, Owzer's diary appears on the table nearby and reading it provides a hint to proceed; flipping the lights at the bottom of the stairs dispels the voice. The paintings of flowers and of the lovely lady attack the party if inspected, and the latter is destroyed to reveal a hidden door to the basement.

If the party did not wait for Shadow when escaping the Floating Continent, they must rescue Relm from the Cave on the Veldt before she can be found in Jidoor.

An NPC in the inn gives the party a tip on how to defeat Deathgaze - he cannot restore his HP out of battle, so repeated fights will continue to damage him until he is destroyed.

The Auction House becomes available after completing the Magitek Research Facility. Valuable items can be bought here, including the magicites Golem and Zona Seeker. In the GBA and subsequent versions, the Excalipoor can be purchased once an NPC in Jidoor mentions a rare sword is going to be auctioned. 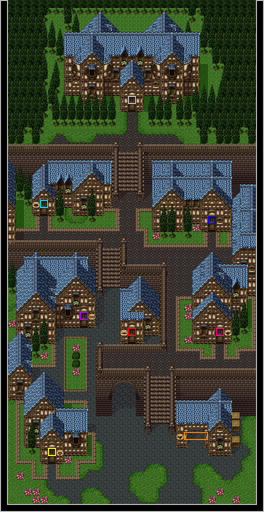 "Kids Run Through the City" is Jidoor's background theme for the World of Balance, and is replaced by "The Magic House" in the World of Ruin.

According to Final Fantasy VI Settei Shiryō-hen, Jidoor is considered one of the four great nations in the world and represents the western world; the other three nations are Figaro in the north, Doma in the east, and the Gestahlian Empire in the south. The guidebook contradicts some in-game elements of Final Fantasy VI canon, however, so to what extent Jidoor is considered a nation-state like the other three is unclear.

When the Floating Continent rises, the cutscene shows its shadow falling over Jidoor from the north. After however, the continent's shadow is permanently over Albrook. Given the geological locations of Albrook and Jidoor relative to the Floating Continent before it rises, it is highly improbable that it could cast a shadow so far as Jidoor, and not from the north, as the island is located further south than Jidoor.

A couple of dummied line intended for an NPCs in Jidoor exists in the game files. 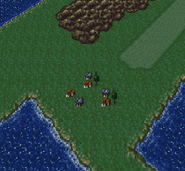 Jidoor in the World of Balance (SNES). 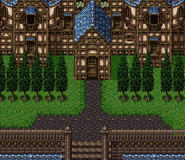 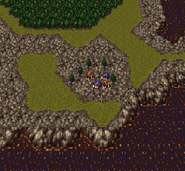 Jidoor in the World of Ruin (SNES).