Jeweled Ring (ジュエルリング, Jueru Ringu?), also called Jem Ring and Jewel Ring, is a recurring accessory in the series. It usually grants protection against Petrify and sometimes another status such as Blind.

Jeweled Ring (originally called Jewel Ring) prevents Petrify. In the SNES version, its relic's description mentions that it also protects against Blind, but this is false and the ring does not protect against it. It can be bought in South Figaro, Narshe, Tzen, Albrook, and Thamasa for 1000 gil, and stolen from Dadaluma.

Jem Ring prevents Petrify, Gradual Petrify, and Paralyze, and can be bought in Mideel for 7,500 gil and dropped from Materia Keeper.

Jeweled Ring is a special accessory that doubles the amount of items or Materia dropped by enemies, and gives Luck +20 through Materia Fusion.

Magic Pot sometimes gives a Jeweled Ring when appeased when it asks the player to use Ultima, Tri-Fire, Iron Punch and Electrocute. Jeweled Ring can also be found during mission 9-5-4 and bought from Net Shop Shade for 10,000 gil.

The Jeweled Ring appears as an item used during Quest Medleys from the map. When used, it adds a Crystal shard to the possible items the player can obtain in the next stage can reached. it can be obtained randomly after completing a Music Stage.

A mysterious ring that protects the wearer against both paralysis and stone. The purple stone residing in its center holds power that guard against status ailments. It can be extremely dangerous to be struck by both paralysis and stone simultaneously, as these ailments would render the body completely immobile, leaving it wide open to enemy attacks. The jeweled ring should definitely be equipped in areas where status inflicting monsters tend to lurk about.

Jeweled Ring is an accessory obtained from finding it in a chest during the explorations of Gronoa Shrine Depths and as the reward for completing the quest Ruin Subduin' and the event Lunar New Year. It provides 3 DEF and immunity to Paralyze and Petrify. 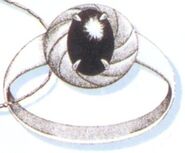