A top secret Shinra experimental specimen. Information on it is scarce, but it is believed to induce hallucinations.

Jenova Dreamweaver is a boss in Final Fantasy VII Remake fought during Chapter 17, "Deliverance from Chaos" in President Shinra's office in the Shinra Building.

Jenova Dreamweaver is an illusion of Jenova, caused by its ability to project false images to its victims. It is a grotesque creature with a skeletal head and various tentacles, resembling Jenova's forms from the original Final Fantasy VII.

Once its health falls below a certain level, its stagger gauge cannot be filled.

The attacks used depend on the boss's battle phase.

The player uses Cloud, Tifa, and Aerith, while Red XIII fights alongside them independently as a guest. The boss is fought in several phases. Jenova resists offensive magic, and its left and right tentacles resist both physical and magical damage. The rear tentacle cannot be targeted and will knock down anyone in range should the player stay behind Jenova. The tentacles take reduced damage, and attack unpredictably, preventing the party's melee attackers from reaching Jenova safely. Most of Jenova's attacks can be blocked, but she has a few abilities that cannot, and are potentially dangerous.

During the first phase, Jenova's main means of attacking is through Space-Time Vortex, small black pools that slowly chase a character (usually the player-controlled one), and if a pool catches someone, Jenova will target them with Vengeance, even if they resist the

Stop effect it inflicts. Vengeance deals heavy damage and can't be dodged, and must be guarded or blocked by a pillar. Jenova also uses Vengeance on characters who are dealing heavy damage to it, or when one of its tentacles is crippled.

Mourning Wail is Jenova's most dangerous attack, where it'll screech while surrounded by miasma, which deals constant damage to characters within its radius; this can rack-up quickly unless the player escapes its range, or cripples a tentacle to interrupt it. Cast Aside is quick, but can be dodged in the same way, and does much less damage. Jenova has a particularly powerful unnamed attack that fires eight small projectiles in quick succession at a single target; they can be dodged by running to either side or by blocking them with the pillars. Quietude fires slow-moving homing orbs that deal heavy damage and can inflict

Silence, but the debuff itself will be avoided if guarded. Jenova will occasionally regenerate its tentacles with Reconstitution.

Once enough damage is dealt, phase two will begin, and Jenova gains some new attacks. Resolution will grant Jenova

Shield, as well as fire homing orbs at all party members, which can be guarded. Rejection will grant Jenova

Reflect, and enable it to counter a melee attack with Beam of Light, a high damage downward strike that can be dodged.

In the third phase Jenova will cast Thanatos Denied, rendering it invulnerable, and curing all statuses and debuffs. It will summon dozens of tentacles into the battlefield, which sprout in groups of three or four. Taking them out builds Jenova's stagger gauge, and weakens the otherwise lethal attacks it will begin to use. Dreams of Quietude, Flame, and Vengeance will launch a projectile from every active tentacle. Once around twenty tentacles have been severed, Jenova's invincibility will fade, and it will use Rejection, bestowing itself with Reflect, nullifying magic damage.

Phase four integrates all the elements from previous phases. The left and right tentacles will return, and a small number of tentacles will spawn around the arena, which use Dreams of Vengeance. In addition to draining a character's MP, Black Rain will now rapidly heal the boss.

During the first phase, the player should destroy the tentacles as soon as they appear while avoiding the black pools. Despite Jenova's resistance to magic, Aerith's Tempest can exploit its lack of mobility to easily bring the tentacles down. Once they're dealt with, Cloud and Tifa can move in, and Jenova will now be vulnerable to pressuring after a certain amount of damage is dealt. They should approach from the front to avoid the rear tentacle.

Tifa is the ideal melee combatant, as the Dreamweaver's more dangerous attacks usually need to be dodged; in addition, she can stack Chi Trap and quickly rack-up damage since Jenova is a stationary target. The player will still be forced to switch between her and Cloud, as the Space-Time Vortex chases after party members. Cloud can stay on the defensive and bait Jenova's tentacle attacks, capitalizing on them with Punisher Mode's counter in combination with Counterstance. Aerith should cast Arcane Ward and ATB Ward behind one of the pillars, and destroy the new tentacles every time they regenerate with a combination of Tempest and lightning magic. Constantly swapping between characters is key to avoid Jenova on focusing a single party member.

In the second phase, Beam of Light can be dodged, so the player should use a regular melee attack, quickly dodge left or right, and then build Jenova's stagger bar.

Parry Materia are great materia to keep on the offensive while using defensive maneuvers.

In the third phase, Quietude and Flame come out fast enough to need to be guarded, but Vengeance takes a long time to charge, so the player should attack the tentacles instead of trying to block the high damage beams. The best way to manage the tentacles is to have Cloud use Triple Slash. If he's equipped with the

Attack Power will allow Triple Slash to take down two or three tentacles per use, as well as keep his health filled with the Bloodsucker perk. The

Berserk buff gained from holding down Attack when in Punisher Mode also temporarily greatly boosts his attack power, and could be bestowed right before using Triple Slash. When Jenova's invincibility fades after severing enough of its tentacles, its Rejection should be dealt with using a melee attack, dodging the retaliatory strike, and building its stagger bar.

In the final phase, all Jenova's previous attacks should be dealt with as before, with two exceptions. One should prioritize avoiding the black rain, even if it means abandoning attacks or taking damage from other sources. There is no longer a need to suppress the vertical tentacles at all costs, and they can be easily severed if they begin to cast Dreams of Vengeance.

In terms of party setup, Cloud can be equipped with the Hardedge to enable his damage, or the

Feathered Gloves, the latter being specially useful thanks to its superior

Speed attribute. Aerith can actually use the

Bladed Staff to deal increased damage thanks to its high critical chance and damage, although it is recommended to focus on a weapon with high

Magic to balance healing and damage.

Aside from invulnerability in the third phase, Jenova Dreamweaver is susceptible to

Poison, which will deal lots of damage over time.

Barrier Materia can be used to mitigate the damage from the high damage magical attacks. Inflicting

Silence makes Jenova unable to cast its magic spells, but those spells are infrequent and nonthreatening enough that it isn't a high priority. Cloud and Tifa can make good use of an

Elemental Materia combined with a

Fire Materia on their armors during the third phase to reduce the high damage from Dreams of Flame while eliminating the tentacles.

Aerith should focus on support and healing unless she's needed to bring down the left and right tentacles, as Jenova's resistance to magic stops Aerith from dealing potent damage. Using her high MP pool, Aerith can cast the

Haste spell on Cloud during phase three, which will allow his triple slashes to carve through the tentacles as soon as they appear.

Esuna is essential for quickly removing the Stop status caused by Space-Time Vortex before Jenova can follow up.

The more useful accessories are the Healing Carcanet and the Protective Boots. Aerith's place as the support means she'll be doing most of the healing, which make the carcanet useful for her, and the boots on Cloud and Tifa allow them to block the Vengeance that follows if they're hit with a Space-Time Vortex.

Any summons are best used during the final phase. Fat Chocobo is the best choice, as Jenova resists the other summons' magical attacks, and his Bombs Away attack has a chance of hitting tentacles around the arena as well as the Dreamweaver.

Jenova doesn't have any new abilities on the hard difficulty, but it is more oppressive with its abilities. Space-Time Vortex and Vengeance are used constantly, and the rate of Jenova using Reconstitution is faster.

MP Absorption Materia to cast spells in an MP-efficient way.

Magnify Materia should be paired either with

Healing Materia. As with most hard mode battles, casting

Regen as soon as the battle starts provides a good MP-efficient form of healing.

Parry Materia is useful on Tifa to provide mobility to escape many of Jenova Dreamweaver's attacks. Elemental can also be paired with a

Fire Materia in someone's armor to absorb some of Jenova's fire-based attacks.

The later phases of the battle are more challenging.

Prayer Materia provides an MP-efficient way to heal, and if

Refocus Materia is used (preferably with Spectral Cogwheel on Aerith and Transference Module with Tifa), ATB bars can be filled quicker, allowing Pray to be used more easily.

"J-E-N-O-V-A - Quickening" plays during the battle. The track has three arrangements of Jenova's theme, the first two are new orchestral arrangements, while the third resembles the original theme. This version was arranged by Tadayoshi Makino. 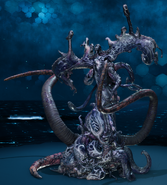 "Dreamweaver" refers to it being an illusion projected by Jenova.

The "Beat" in its Japanese name refers to the prenatal heartbeat, a stage of development preceding birth. In some foreign language versions the enemy is called "Jenova Pulse" referring to the same thing. The name of the musical track that accompanies the battle still retains the allusion, being named "Jenova Quickening". [view · edit · purge]The term "quickening" refers to the action of bringing someone, or something, to life, as well as the feeling of stimulation or excitement. The track starts with the sound of a thumping heart.

The name is in continuation with the naming of the Jenova bosses in the original Final Fantasy VII—Birth, Life, Death and Synthesis—Jenova "Pulse" preceding Jenova∙BIRTH.