Jenova∙LIFE, referred to as Jenova Life in the BradyGames guide, is a boss in Final Fantasy VII and the last boss of Part 1. Jenova∙LIFE drops the Wizard Bracelet armor and has the Aqualung enemy skill for the player to learn. This is one of the few battles in the game to not trigger a victory pose.

If the player did not talk to the Innkeeper about the situation of the town during Cloud Strife's telling of the Nibelheim Incident back in Kalm, defeating Jenova∙LIFE will trigger the "ghost" event to occur the next time the player visits the church in the slums.

Nothing
Wizard Bracelet (100%)
Nothing

Jenova∙LIFE attacks with Blue Light, Blue Flame, and uses Reflect for defense, and always uses as it as a counterattack after being hit with Magic Hammer or any magical attack. Her Blue Light attack may be used twice in one turn. All of her attacks consume MP and are Water-elemental.

Players can bring the Enemy Skill Materia in this battle to learn Jenova∙LIFE's Aqualung ability.

Simply equipping a Water Ring on any party member will make the battle impossible to lose. The player can also link Leviathan with Elemental to someone's armor. Casting Magic Hammer will quickly prevent Jenova from using her most damaging attacks, but each time Magic Hammer is used on her, she will cast Reflect. Reflect is easily disabled with DeBarrier. As she only has 300 MP, three cycles of DeBarrier and Magic Hammer will render her unable to fight.

Non-reflectable spells and summons, such as Comet, Beta, Bahamut, Kujata, Odin, and Titan, can deal a lot of damage. For other offense, Quake2 or Quake3 are good, as well as each character's best Limit Breaks. Death Sentence on Tifa wielding her Powersoul weapon is useful in this fight. Casting Haste or Big Guard on the party allows them to use these attacks more frequently.

The player can inflict Paralysis with Cloud's Cross-slash or Dazers won from Boundfat around Corel Valley, Corel Valley Cave, and the Forgotten City. Deathblow is guaranteed to land a critical hit when Jenova is paralyzed.

Choose Random Opponent
Use Blue Light on Target
If (Rnd(1..SpclChance) == 1) Then
{

Choose Random Opponent
Use Blue Flame on Target
If (Rnd(1..SpclChance) == 1) Then
{

Choose All Opponents
Use Aqualung on Target
Count = 0

If ((Jenova*LIFE doesn't have Reflect Status)

Choose Self
Use Reflect on Target

The "JENOVA" music does not play in the battle, rather "Aerith's Theme" continues playing from the previous scene.

Jenova∙LIFE appeared as an enemy during an event called "Calamity From the Skies". Jenova∙LIFE only used its Blue Light ability from its original appearance, which covered the screen with a blue tint and forms blue clouds around the party that exploded and caused damage. 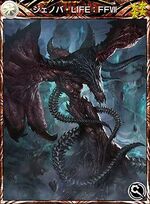 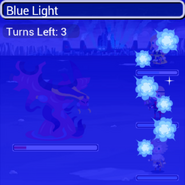 The names of Jenova∙BIRTH, Jenova∙LIFE, and Jenova∙DEATH may allude to Saṃsāra, the repeating cycle of birth, life, and death in Buddhism.