Jenova∙DEATH, referred to as Jenova-DEATH in the BradyGames guide, is a boss in Final Fantasy VII and the third form of Jenova. It is fought in the Whirlwind Maze.

Nothing
Reflect Ring (100%)
Nothing

Jenova∙DEATH attempts to inflict Silence status onto the party. She can attack quickly with the Red Light portion up three times in one turn, and has a high Magic Defense compared with her physical Defense. All of her attacks are Fire attacks.

Tifa is a required member of the party for this boss, so she should be equipped properly.

The player doesn't need to regard armor Defense for this battle, as all of Jenova's attacks are magical. As all of Jenova's damaging attacks are Fire-elemental, equipping a Fire Ring or Fire Armlet to at least one party member makes the battle impossible to lose. Elemental Materia linked to a Fire-elemental Materia in armor, or the Dragon Armlet also help.

The Ribbon from the Temple of the Ancients and the Ribbon from Gaea's Cliff are available to protect against Silence, and the player can also use Added Effect paired with Seal.

Jenova∙DEATH is vulnerable to the Paralyze component of Cloud's Cross-slash Limit Break, as well as Dazers won at the Sleeping Forest from Boundfat.

If ((At Least One Opponent has Silence Status)

Choose Random Opponent without Silence
Use Silence on Target

Choose All Opponents
Use Tropic Wind on Target
Count = 0

If (2nd Opponent doesn't have Death Status) Then
{

}
If (1st Opponent doesn't have Death Status) Then
{

}
If (3rd Opponent doesn't have Death Status) Then
{

Jenova-DEATH is an enemy during an event called "Operation Jenova". To get Jenova-DEATH to appear, the players must successfully shut down the three Mako Reactors. In battle, Jenova-DEATH uses Red Light. Red Light covers the entire screen with a red tint and forms red clouds around the party that can explode and cause damage. 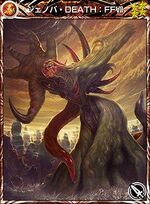 The names of Jenova∙BIRTH, Jenova∙LIFE, and Jenova∙DEATH are alluded to Saṃsāra, the repeating cycle of birth, life, and death in Buddhism.

Retrieved from "https://finalfantasy.fandom.com/wiki/Jenova%E2%88%99DEATH?oldid=3309752"
Community content is available under CC-BY-SA unless otherwise noted.