Temple of the Ancients; Battle Square

Jemnezmy is an enemy in Final Fantasy VII. She is encountered in the Temple of the Ancients and in the third round of the Battle Square after the player acquires Highwind and Gold Saucer reopens. When fought in the Battle Square her stats are enhanced with double the regular HP and her Attack and Magic Attack are increased by 25%. In both places she is accompanied by Toxic Frogs.

Jemnezmy uses Fascination, which always confuses male party members, and Cold Breath, an Ice-elemental attack which is only cast on female party members and members that have been turned into frogs. Although she may seem difficult, casting a Poison spell on her will instantly kill her.

Interestingly, if a party member attacks her while a frog and/or poisoned, she will cast Toad or Poisona on that party member as counter moves.

& (At Least One Opponent has Frog Status)) Then

}
Use Cold Breath on Target
TempVar:FrogAtt = 1

If (At Least One Opponent doesn't have Confusion Status) Then
{

}
If (Target is Cloud, Barret, Red XIII, Cait Sith, Vincent or Cid) Then
{

Use Fascination on Target

Use Cold Breath on Target

Use Toad on Target 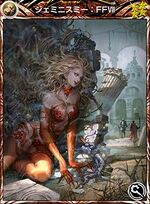 Retrieved from "https://finalfantasy.fandom.com/wiki/Jemnezmy?oldid=3239069"
Community content is available under CC-BY-SA unless otherwise noted.