A former superstar, his bold words and confident mannerisms conceal the deep love he holds for his family.

A former blitzball star, and Tidus's father. His surly and rough-spoken nature belie a much gentler heart.

Jecht is one of Cosmos's champions during Dissidia 012 Final Fantasy, but during the war, he is recruited to become one of Chaos's minions. In the original Dissidia Final Fantasy, Jecht is forced to fight his rival and son, Tidus. Jecht is a famous blitzball player from Zanarkand. Burly and rough-spoken, his style of brawling is straight from the sports arena. Similar to Golbez, he does not care about the other villains' plans, but fights for his own, more benevolent desires. Tidus wishes to settle his grudge with Jecht and finally best his father in battle.

Jecht's default appearance is based on his Final Fantasy X design

, while also incorporating elements of his form as Braska's Final Aeon.

He wears black shorts with an orange and red sash over his right leg and bears a large black tattoo of the Zanarkand Abes logo on his chest. He wears a red bandanna, a metal gauntlet on his left arm, and carries a large black sword. Alluding to his form as the Fianl Aeon, he has clusters of spikes emerging from under his sash and from his left shoulder.

In Dissidia, Jecht's alternate outfit turns his sash and spikes red, and his sword gains red colorings with gold details, a reference to Auron's color scheme.

Jecht's second alternate outfit is named "Abes Uni" based on the Zanarkand Abes uniform as seen in the Final Fantasy X introductory sequence.

His shorts are longer with a gray and black pattern, he wears blue and black coverings over his lower arms, and has a darker headband. His Final Aeon spikes and the cloth over his leg are absent, and he remains shirtless and barefoot. This is Jecht's attire in Dissidia 012 Final Fantasy as a warrior of Cosmos and in the opening FMV. His EX Mode is a dark purple Final Aeon with orange claws, meant to resemble the Final Aeon as it appeared when being empowered by the Yu Pagodas.

Jecht wield the sword seen in his Final Fantasy X concept art, but not in-game. It is a large black blade with a thick, pointed head and red swirls along the middle of the blade, and a length of chain hanging from one side. In his EX Mode the sword gains swirl textures. In his original alt outfit in Dissidia, to go with the outfit's coloration referring to Auron, the sword is red with gold swirls, reflecting the Final Fantasy X version of the Masamune.

Jecht's sword in his EX Mode is the same across his alternate outfits, with the exception of his original alt outfit in the first Dissidia, where the sword turned black and gained swirl textures, but the markings on it remained yellow.

The weapon is unnamed in Dissidia, but Final Fantasy Record Keeper named it Sin's Talon, after one of Jecht's exclusive weapons in Dissidia. Later spin-offs, including Dissidia NT, treat Sin's Talon as a different weapon and name Jecht's sword the Iconic Sword. Record Keeper named the EX Mode form of the sword Sin's Fang after another of Jecht's exclusive weapons, but the name was also used for a different weapon in other spin-offs and the sword has not appeared on any other occasions to receive an alternative name. 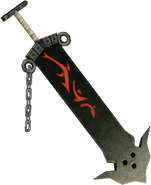 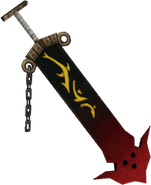 Jecht's sword in his alt outfit in Dissidia.

Jecht's swords in his EX Modes. 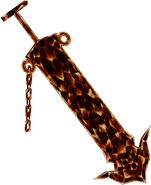 Accept that you are weak. Accept the path you've taken. Accept that nothing makes sense in this whole damn world! Once you accept everything, then you can choose your next path—the one path you really want to take.

Jecht's outward appearance disguises a gentler heart. He is observant and advises others based on his observations. Jecht cares deeply for his son, even if he berates him. Despite his patronizing attitude, Jecht understands Tidus's desire for his acknowledgement of the latter's strength, which he gives. Jecht's tough appearance is meant to appear strong in the eyes of his son, and disguises his pride for being his father, which would be impossible to express in the cycles of battle.

During the twelfth cycle of war, Jecht serves as a warrior of Cosmos. Early in the cycle he went exploring for treasure with Bartz and Laguna, but the three got lost. Jecht napped while Bartz and Laguna fought so Bartz could learn how to copy one of Laguna's attacks. Bartz challenged Jecht to learn from him too, but Jecht refused, saying his moves were too difficult to learn. At a later time he spoke to Kain about trying to open up a bit towards his allies, as they are intimidated by his loner attitude. When he notices Lightning is hesitant to accept the leadership of the Warrior of Light, he suggests they fight together so she can see how he handles battle.

Later, Jecht accompanies Yuna after she is separated from her group, only to lose sight of her. He eventually is confronted by Tidus, who had joined Chaos to defeat his father. Tidus tries to provoke Jecht into fighting him, with the man calling him an idiot for being brainwashed. Before the two can battle, Yuna intervenes to protect Jecht and reason with Tidus. The Emperor appears and attacks and Tidus takes a fatal blow for Yuna. Jecht, refusing to let his son die, saves him by giving him Cosmos's light, rendering Jecht an empty vessel. The Emperor spirits Jecht away to Chaos's throne, where Chaos fills Jecht with the power of discord and converts him into his newest agent.

Jecht is recruited by the Emperor to battle Tidus on the promise that when the Emperor's plan reaches fruition, he and Tidus will return to their world. Golbez suspects the Emperor will betray Jecht and meets with him several times to warn him.

When Tidus and Firion split up, Jecht confronts Tidus at the Emperor's palace Pandaemonium, ready to fight. The Emperor intervenes and tells Jecht that Tidus wishes to fight him due to hatred, which is against their intended plan. Though disgruntled, Jecht departs and leaves the Emperor to battle Tidus. Jecht comes across Firion at the Lunar Subterrane, and the latter questions if Jecht ran from his fight with Tidus. Annoyed by the implication, and by the Emperor dismissing him, Jecht attacks Firion to take out his frustrations. Afterward, Jecht seems unfazed as Firion stands exhausted. Jecht wishes to keep going and Firion refuses, saying he will not be a substitute for Tidus. Jecht agrees and leaves, deciding the Emperor needs to stop meddling.

Heeding Firion and Golbez's advice, Jecht turns on the Emperor and the two do battle as Firion and Tidus find them. The Emperor teleports away as Jecht kneels injured, telling him to fight Tidus as much as he likes. Jecht prompts Tidus to battle him, but Tidus refuses to fight Jecht when he is hurt. Jecht leaves, and Tidus splits from Firion to follow. Following Jecht to Dream's End, Tidus uses a potion from Firion to heal his father's wounds. Now content to fight Jecht at his full strength, Tidus emerges victorious and claims his Crystal. Jecht begins to fade, and Tidus tearfully admits he only ever wanted his approval. Jecht chuckles as he vanishes, his last words to compliment Tidus on his strength.

With Cosmos gone, the Emperor reveals to Jecht the cycle will no longer begin anew, and that both they and the heroes will eventually vanish. The Emperor further reveals Jecht's origins as a warrior of Cosmos and how his fight against Tidus was planned so the Emperor could create his own Crystals, attuned to warriors of darkness rather than light, to survive the destruction of World B and Chaos to rule existence.

Disgusted, Jecht leaves to find a good fight and finds Tidus, telling him a true ace never stops until the end. The two battle, and Jecht is again defeated. Jecht goads Tidus, telling him to accept his weakness and that the world they are in makes no sense. When Jecht asks if Tidus will cry, Tidus tells him to shut up. Pleased with his son's resolution, Jecht rises and begins to walk away as pyreflies float up from his body. Jecht warns Tidus "don't make 'him' come out here again," and vanishes, telling Tidus it was fun being his father.

If a warrior of Cosmos other than Tidus encounters Jecht, Jecht notes that Tidus isn't around, and decides to fight the warrior anyway, since that's what they came for. After being defeated, he remarks they aren't bad, and he won't have anything to worry about.

Jecht's fighting style is Brutal Blitzer, attacking with quick flurries of melee blows. His Bravery attacks change their effects depending on timing and the direction the analog stick is pushed when chaining them together, allowing him to variably initiate a Chase or inflict Wall Rush. Jecht's combos require very precise timing to master, but have great power when properly executed and execute quickly. Additionally, all of his Bravery attacks can chain to any of his equipped HP attacks, though depending on where the opponent is positioned there is no guarantee they will hit. He also has Jecht Block, which can block most blockable attacks save for those that cannot be blocked at all. Jecht's major weakness is his total lack of ranged skills, and he can struggle against long-range characters who can zone him away and stay out of his reach.

In Dissidia 012 Final Fantasy, he is fought in Entrusted Power, Seeds of Hope, and Conclusion of the Cycle chapters of Story Mode.

See also: Gameplay differences between Dissidia and Dissidia 012 for Jecht 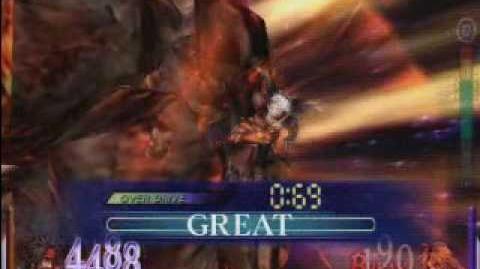 Jecht's EX Mode is his Final Aeon form from Final Fantasy X. In his EX Mode Jecht gains the ability "Full Combo", letting him continue his Bravery combos even if the initial strike misses. This lets him overwhelm opponents with powerful combo attacks, and makes it easier to strike when pausing to charge up his attacks.

Jecht's EX Burst is Blitz King, his variation of Tidus's signature Blitz Ace. Jecht attacks by kicking enemies into the air, slamming them back down, and then impaling them with his sword and leaping into the air. Two timer meters appear as Jecht kicks a boulder apart and then kicks the shards at the opponent. The player must press

to stop the cursor as it moves back and forth across the meter, and the closer to the middle the cursor is stopped, the more pieces Jecht shatters the boulder into before kicking them at the opponent. Getting two "Great" ratings maximizes the Bravery damage dealt and the animation depicts causes the rubble to circling out before converging on the opponent and exploding, similar to Tidus's Energy Rain 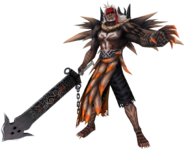 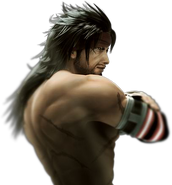 Jecht and Tidus in Dissidia 012 trailer.