Jecht's default player name is Nameless Illusion, and his manikin counterpart has been renamed Fleeting Phantom.

Jecht's default attire is "Legend's Uniform", an updated version of his original Dissidia attire by Tetsuya Nomura. He has a more detailed sash, gray shorts, slightly spikier hair, and more noticeable front bangs. Its first alternate coloration recolors his shorts and gauntlet black and his sash a gradient of blue and black, with the detailed pattern on his sash colored white. The spikes under his sash on his left shoulder are a darker gray, and his headband is blue. This color scheme resembles Braska's Final Aeon's second alternate color scheme in EX mode from Dissidia 012 Final Fantasy. In the second alternate coloration, Jecht wears brown 'camo' shorts and his sash is a gradient of green and yellow. The spikes under his sash and on his left shoulder are light gray with lime accents, his gauntlet is a darker silver, and his headband is green. The color scheme resembles Braska's Final Aeon's first alternate color scheme in EX Mode from the PlayStation Portable games.

Jecht's first alternate costume is the "Away Uniform", an updated version of his first alternate costume in Dissidia 012 and his original appearance in Final Fantasy X . Whereas his hairstyle in the PSP games resembled his original concept art and in-game appearance, his hair now fully resembles his appearance during the ending FMV in Final Fantasy X. The first alternate coloration of this costume recolors his headband and sash purple and his gauntlet brown. The second alternate coloration recolors his wrist bandage yellow, his headband blue and sash a gradient of blue to black, and the pattern on his sash red, matching the pattern on the Iconic Sword.

Owing to their reconciling at the end of the thirteenth cycle, Jecht and Tidus refuse to fight each other when they are summoned back to World B by Spiritus and Materia, respectively. Defecting from Spiritus's faction to aid his son and Firion, Jecht is proud to see how strong Tidus has become and happily reunites with him.

Jecht wields greatswords and axes. None of Jecht's alternate weapons have appeared in previous Final Fantasy games, and are original designs for Jecht in the Dissidia series. Though he primarily wields greatswords, in the PSP games he also used axes. The naming and appearance of his weapons may refer to Jecht's more wild and rough fighting style compared to Tidus.

His default weapon is the Iconic Sword. Though wielded by him as Braska's Final Aeon, Jecht was never seen using this sword in Final Fantasy X in-game, though it was featured in his concept art, before officially using the weapon in the Dissidia series. Jecht's first alternate weapon is the Seafang, a large brown blade with a smooth, claw-like curve on the blunt side, and multiple jagged edges on the other. The center of the blade features a fracture-like design that goes down to the guard, and a simple black handle for the blade. His second alternate weapon is the Megalith, a large axe with an earthen motif, featuring a jagged edge on the axe and guard, with white crack designs on the axe itself. The axe is entangled by chains around the extended guard, and the center of the axe features an emblem, resembling the same design featured on Tidus's standard shields

in Final Fantasy X. His third alternate weapon is Sin's Spur, a blade that resembles the scales of a Sinspawn. 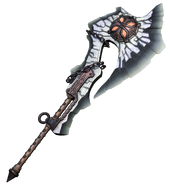 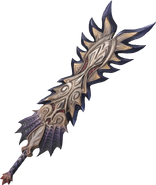 Jecht is summoned as a warrior of Spiritus and gathers with the other antagonists at the god's dome. When Spiritus communicates with Materia, Jecht silently watches as Spiritus declares his intentions to rule World B.

Having made peace with his son in the previous cycle, Jecht is uninterested in the war between the gods and defects from Spiritus's faction to aid his son and his companions. He aids Firion when the latter is blasted by a magic attack from Kefka and nearly sucked into a portal, catching him before he flies in. The two follow Tidus through a gateway that resembles Besaid, where Jecht and Tidus happily reunite. He fights alongside his son and Firion against the combined forces of Exdeath, Kefka, and Ultimecia. When the planesgorgers begin to destroy the area, Jecht offers to stay behind and investigate while Tidus and Firion escape.

After the two gods form a truce, the champions on both sides stage a battle to lure Shinryu to them, the dragon god responsible for the planesgorgers eroding the realm. During the ensuing fight, Jecht battles Squall and Bartz, easily holding the two off. As soon as Shinryu arrives, Jecht shields his son from the dragon's attack before participating in a joint attack against it, but they are repelled as Shinryu reveals his true form in a potent burst of power. After regaining their composure, the warriors work together to defeat Shinryu.

Shortly after killing Shinryu, the moogles give Jecht a crystal to host his memories for Spiritus to use in the new cycles of wars. With a crystal doppelgänger of himself to serve on Spiritus's behalf, Jecht is sent home alongside Tidus.

Type: Assassin - Jecht is at his best when he is right up in an enemy's face.

Jecht fights similarly to the PSP Dissidia games, relying on close-range combos of punches, kicks, and sword blows. His attacks are fast and have high combo potential, though average damage and small hitboxes. Quick Block acts as a re-imagined Jecht Block, able to deflect most attacks including HP attacks, and letting Jecht immediately counter with a Bravery attack, but it requires good timing to use. Jecht's playstyle relies on making good use of his EX Skill, Fake Out, which lets him cancel any action immediately. When using an HP attack he can immediately block, and when using Bravery attacks he can follow it up with another Bravery attack. This allows the player to string Jecht's attacks together and deal heavy damage. Without his EX Skill however, Jecht is merely another close-range combatant with a smaller movepool than normal and no ranged attacks. 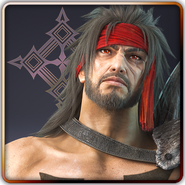 Sketch for the reveal of Jecht.